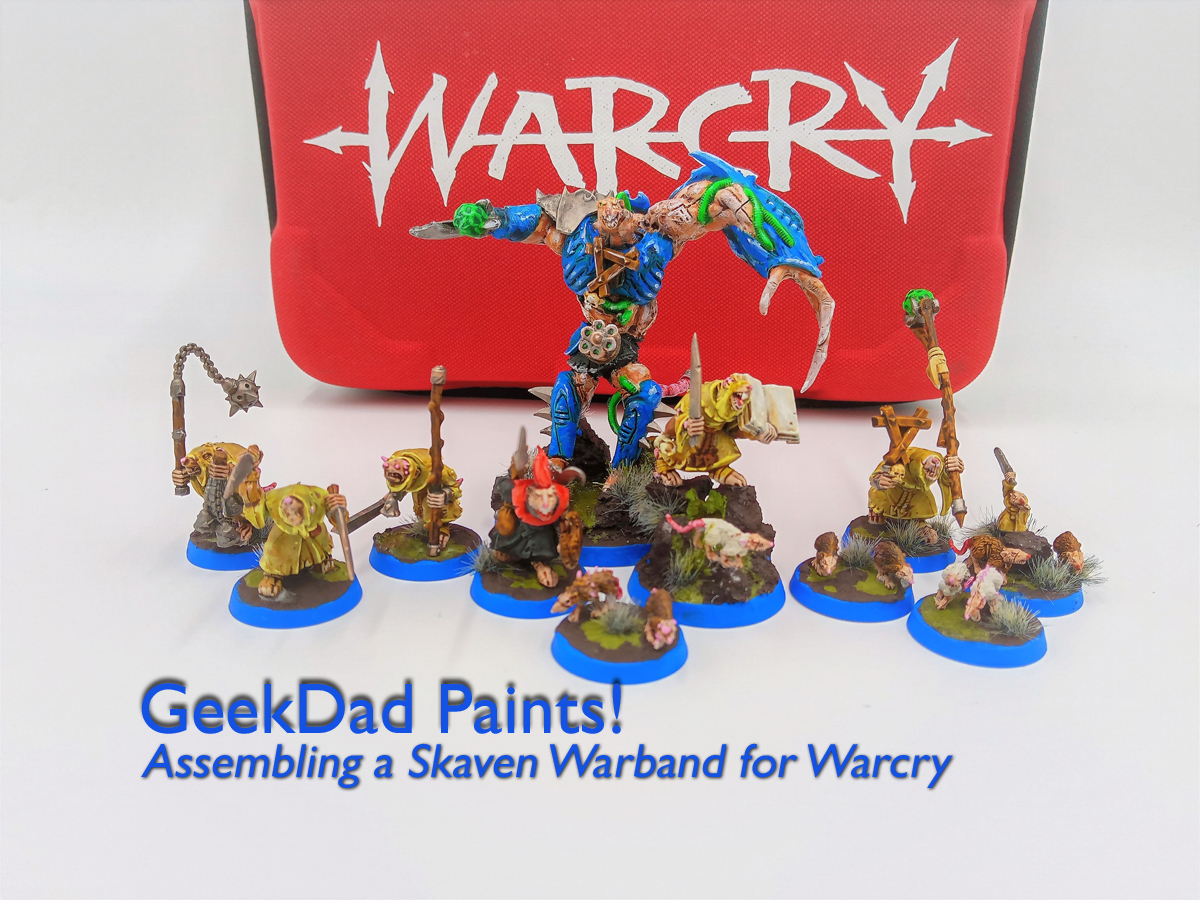 Now is the time for the plague-bearing Skaven.

Skaven, also known as the ratkin, are a malevolent and diabolical race of large humanoid rat creatures. They are cruel, treacherous, massively numerous, and they live to spread pestilence and chaos about the worlds of Warhammer: Age of Sigmar. Unlike the Ironjawz Orruks, my previously assembled warband, Skaven have the lowest average points value per model in Warcry and so a warband of Skaven could easily reach 15 or more models. So I’ll be putting together a mini horde of swarming rat-warriors for my Skaven Warcry warband.

The armies in Warcry are broken down into four Grand Alliances: Order, Chaos, Death and Destruction. Each order has an accompanying book with includes all the fighter statistics for the armies of that order. The Skaven belong to the Agents of Chaos and that book includes 3+6 different Skaven fighter types allowable in Warcry. For my warband I used eight different types of fighters. 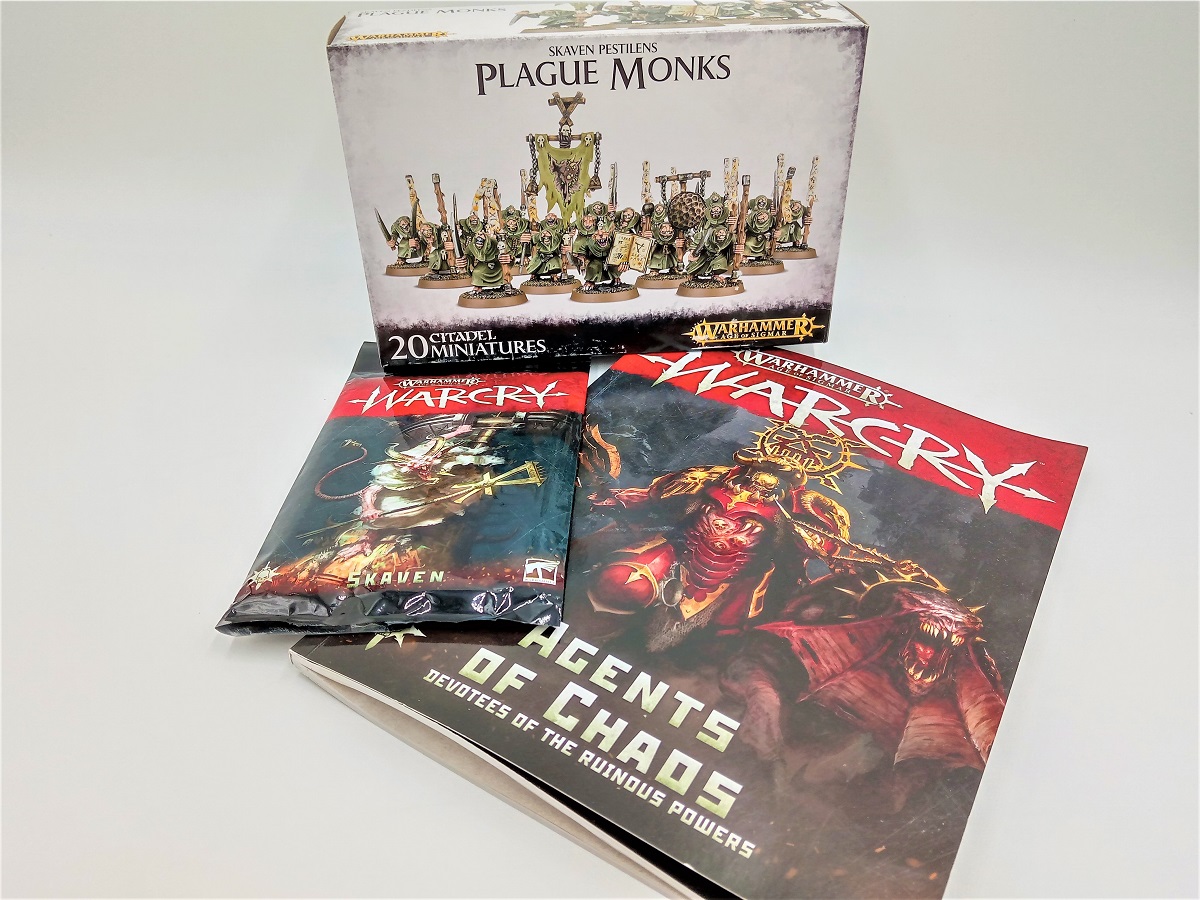 To help build my warband I picked up a copy of the Agents of Chaos book and found a pack of the Skaven Warcry fighter cards on Ebay.

Games Workshop did release a Skaven warband for Warcry, but unfortunately I was too late to the party, and it’s now near impossible to get hold of for a sensible amount of money. So, instead, using the Agents of Chaos book alongside the official fighter cards, I tried to work out the most efficient and economical way of putting a Skaven warband together. My objective was to have as many different fighter types as possible for as little outlay as possible, so I did some research, fired up my excel spreadsheet and went to work.

The conclusion I came to was that it was going to be very expensive if I wanted to feature all of the different types of Skaven there are. After all, there are 36 different fighter types including 11 leaders available, and if I purchased sets which featured all of these you’d be looking at well over £300 worth of models. My budget was closer to £30. Therefore, I had to pick one clan of Skaven to be the foundation of my warband.

The most obvious set for this, one that contained the most number of individual figures and also included the most unique fighter types was a set of Skaven Plague Monks. In this set you get a couple of leaders, some plague monks with various weapons and a standard bearers. But that’s not enough fighter types for my warband, so I decided to try building on my kit-bashing skills to see what I could up with using this box of Skaven Plague Monks and my collection of assorted spare sprews.

In total I ended up with 10 different fighter types, some of which I was pleased with, two of which I am embarrassed by, and all of which would do the job and be perfectly passable as stand-in models for a fun to play and unexpectedly strong warband.

So, in total I have:

Not bad from a £30 set of models! To begin with I won’t be able to use all these models in a starter warband, so I’ll have to decide which ones to leave out.

As I was hoping for a cost effective warband I had to improvise a couple of the models I would be using. Thankfully, in the Plague Monks set you get 20 models to build, this would be more than enough for me, so I started by putting together the units from the kit which I knew I’d be using: Censer Bearers, Knife Wielders, Stave Monks and Bringer of the Word. I assembled three of each of these, except the Bringer of the Word – he’ll be my warband leader, so I only want one.

I then kit-bashed some giant rats – some small rats come in the box as add-ons for the monks, but I figured I could put two or three on a base and that would suffice as a giant rat. I also tried to crease some Stormvermin using the same parts as the monks – I added a glaive left over from my Nighthaunt warband, a tuft of hair from a Stormcast Eternal, and a shield from a Seraphon and hey presto: two Stormvermin body guards ready to protect the leader!

My final attempt at kit-bashing was arguably less successful. I found some old sprews of a Daemon Prince I had left over and, with the head of a Plague Monk and lots of Liquid Green Stuff, managed to create a rather disgusting looking Skaven Stormfiend. I also used some spare staves from the monks to build a Gatling gun, and placed this rather unfortunatley on the model. But nonetheless, I now had enough variety in my warband to begin painting.

My aim for this was warband was to not only create a cost effective battle group, but also one which I could attempt some speed painting with. That’s not just an excuse for my abysmal painting skills – honest. So, once I had the models and assembled them I set about deciding on my paint scheme. I wanted to use contrast paints and a single highlight to use as few coats as possible. On the whole I managed this and was able to batch paint all 20+ models in a couple of evenings. Lesson learned: speed does not equal quality. 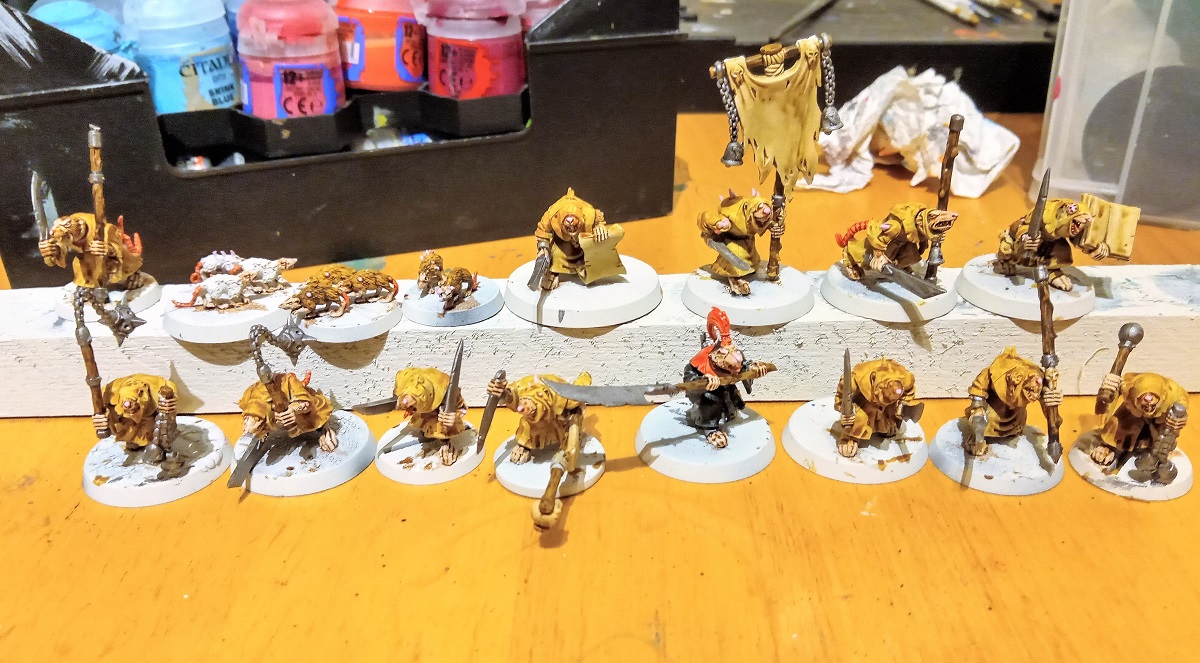 Here is the first coat of contrast paints over a base spray of Wraith Bone. For the robes I used the appropriately named Plaguebearer Flesh, for the wooden staves and belts I used Snakebite Leather and for the skin and fur I based with Guilliman Flesh. Metals were painted with Leadbelcher and the tails and noses of the rat-kin were Blood Angels Red.

To finish off the robes I added a simple edge highlight of Dorn Yellow, I washed the metals and wood with Nuln Oil, and used Fulgrim Pink to drybrush the tails and noses. That was pretty much the extent of my paint job here, with the exceptions of the Rat Ogre, Stormvermin and the Stormfiend. 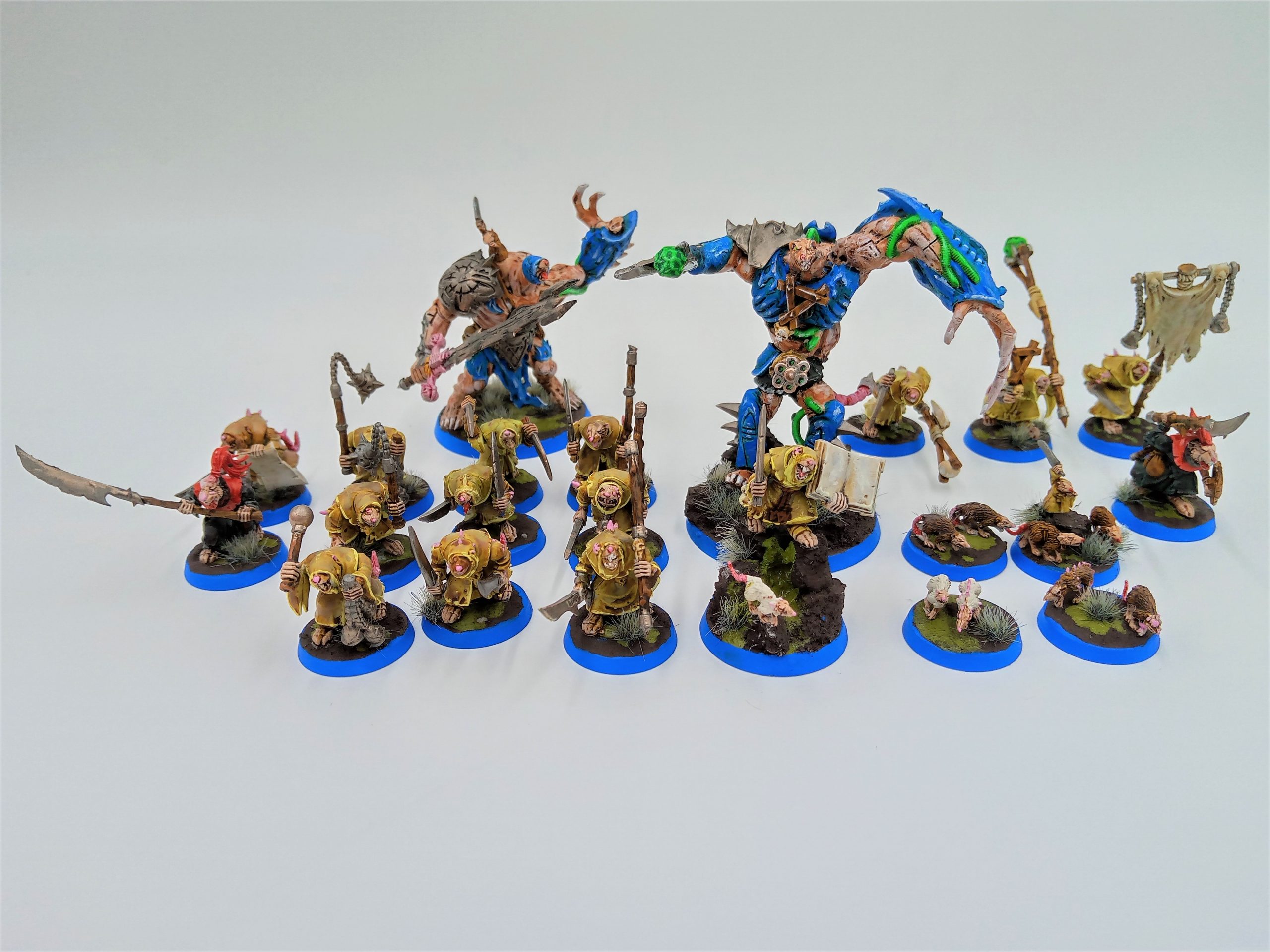 With the assembly and painting complete, I now had my 1,000 points Skaven Warcry warband ready to go.

The Bringer of the Word would be the leader. 150 points is relatively cheap for a leader and his special ability Lead from the Back is a useful boost to all allies within a certain range, and the quad ability Recite from the Book of Woes neutralizes all enemy abilities within three inches. Which is nice. 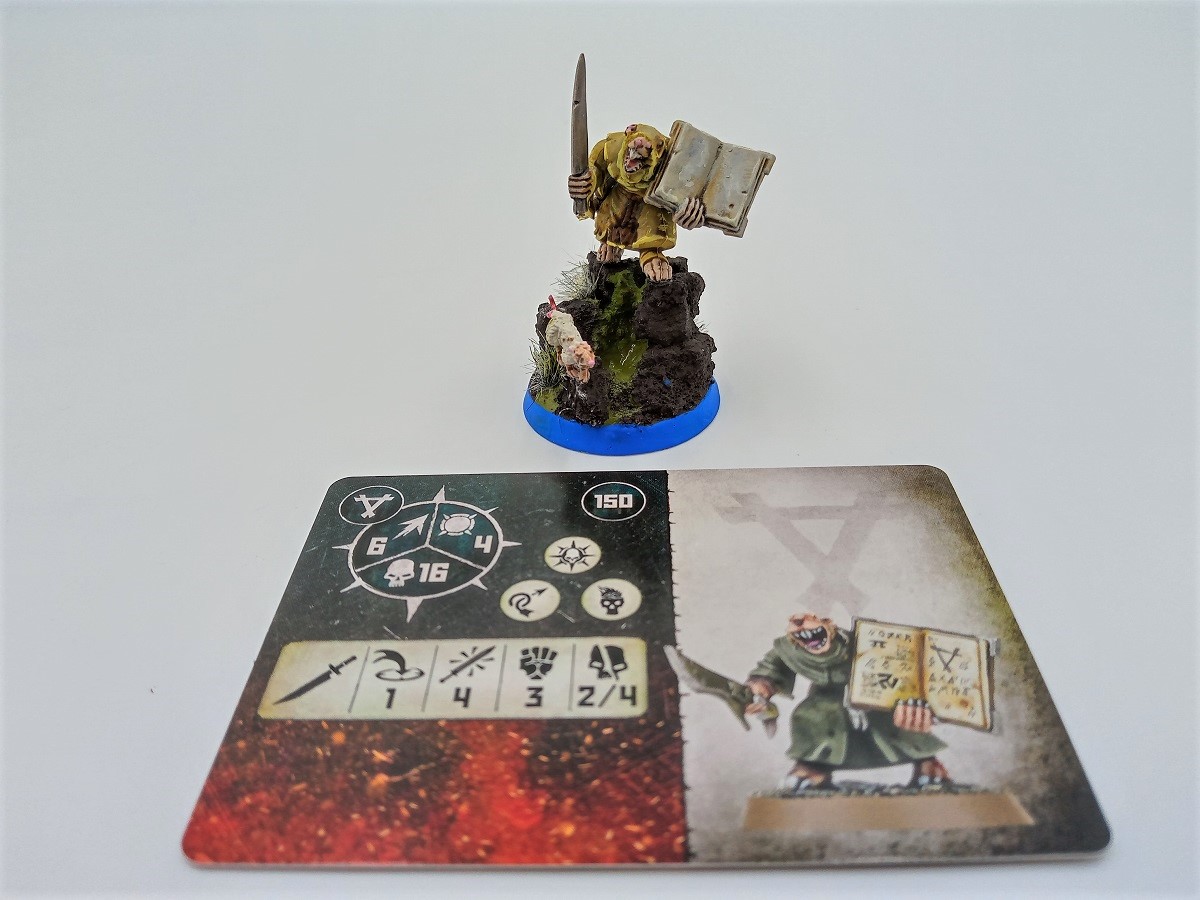 Any easily squished leader needs a bodyguard and for my warband these two Stormvermin will do the job. Like all the Skaven, they’ve got excellent movement ability and unlike the others they actually have good toughness, but it’s their Hired Bodyguard ability that protects the leader that makes them work here. 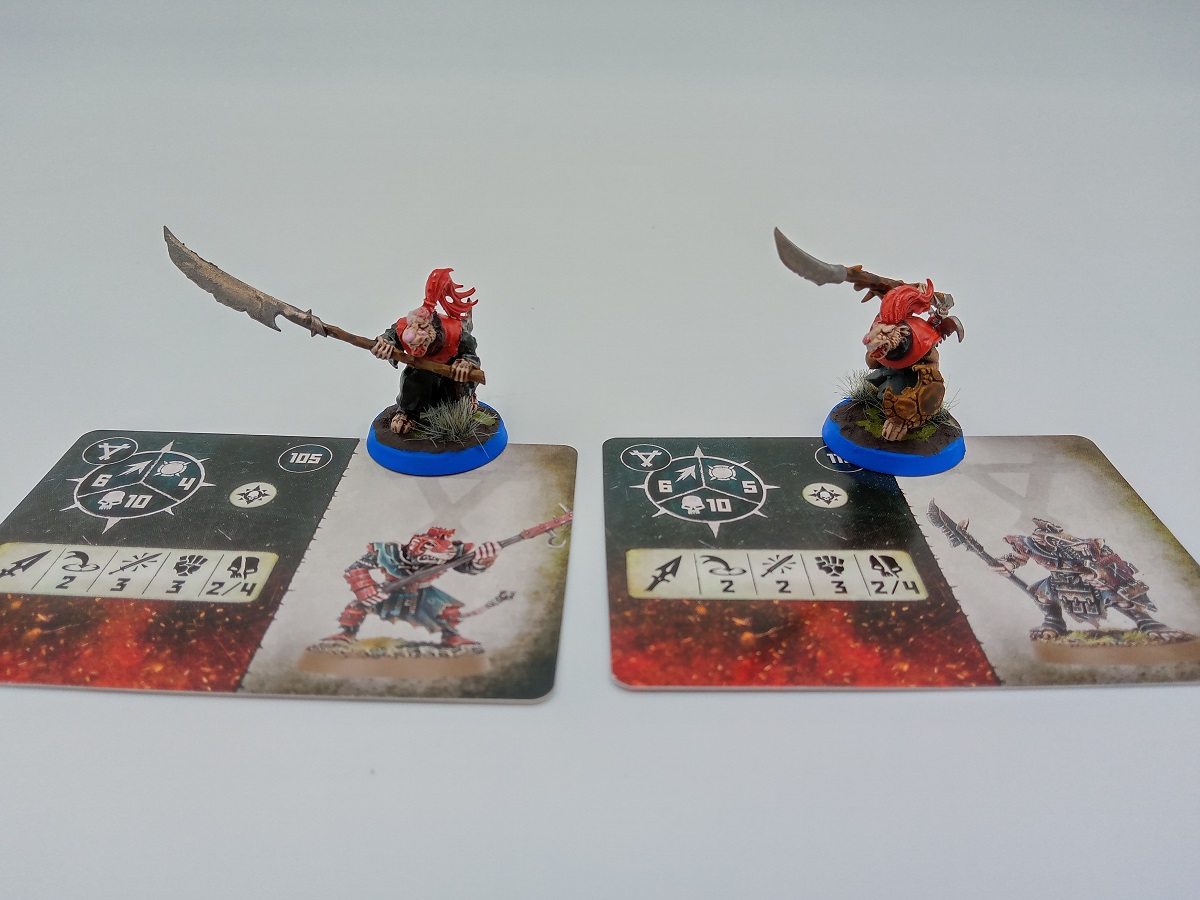 Plague Monks come in three main varieties: Foetid Blade, Woe-Stave and Censer Bearers. Although useful, the Censer Bearers are a bit more expensive, so I’ll leave those for now, but take 1 of each of the others to form the foundation of my warband. Their only ability is the Scurry Away double – which is a 50/50 chance of a free retreat. 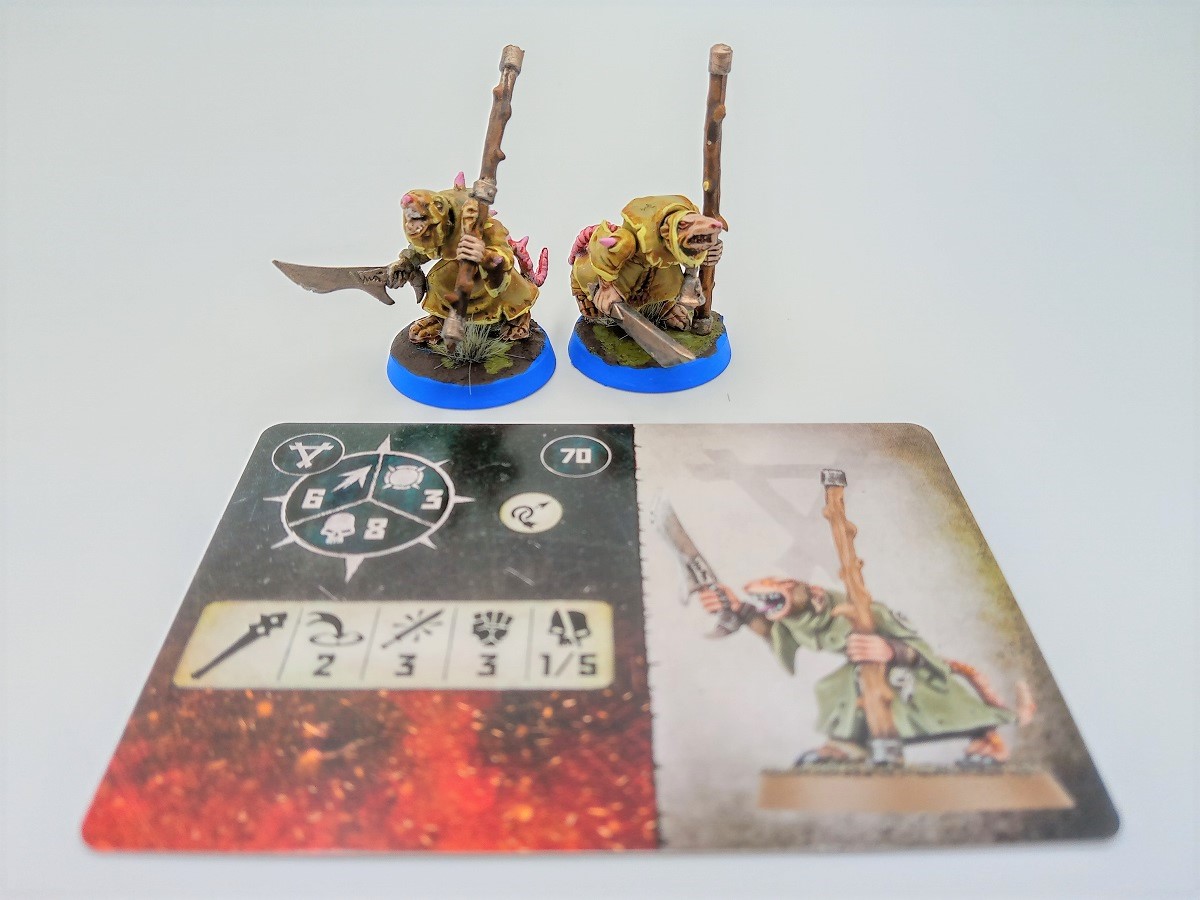 Next, I’ll take four giant rats. At 35 points, these are the lowest cost of any model in Warcry and will not last long in battle, but can be excellent at picking up objectives and covering large distances in a single turn. 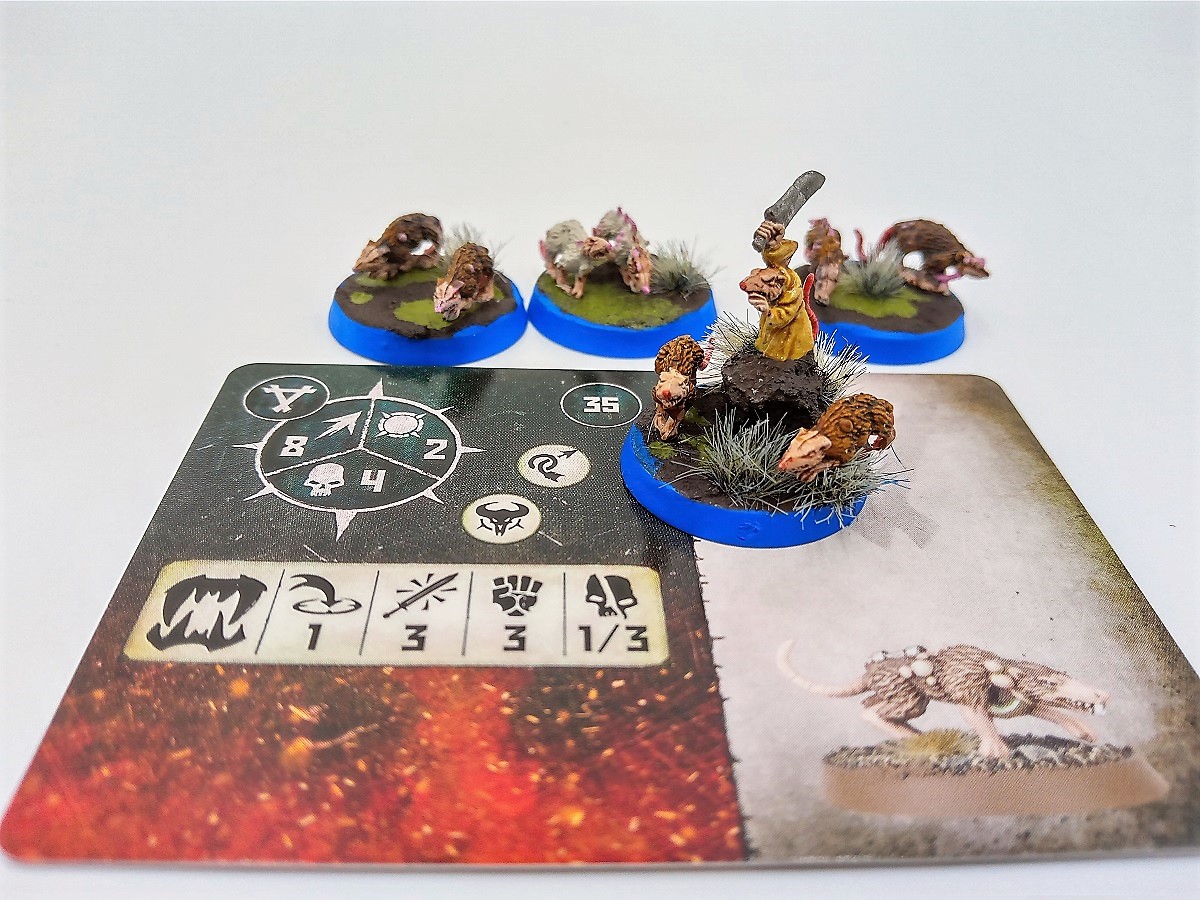 To make the most of the Giant Rats you need a Packmaster. Not any better in terms of combat than a Plague Monk, but they do have the ability to prod any ally with the beast runemark – a giant Rat or Rat Ogre for instance – and get them to make an immediate bonus attack. Very handy indeed, especially if you happen to have a Rat Ogre model you’ve kit-bashed from some old sprews. 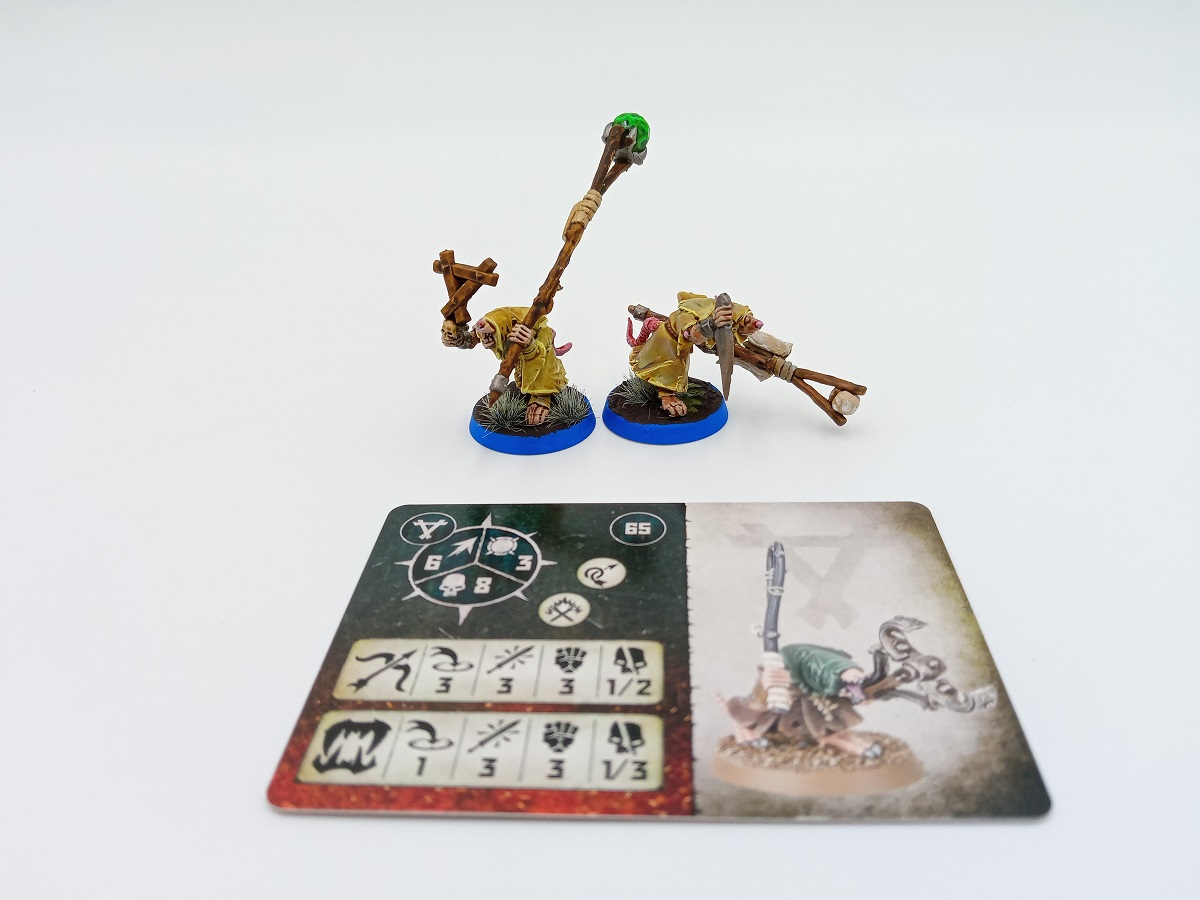 Finally, at 285 point the Stormfiend is very expensive when compared to the rest of this group, but they can deliver the heavy-hitting you might need against a more kill-focused warband. These one have good ranged attacks as well as a strong Crushing Charge triple ability deals extra damage when you move close to an enemy. 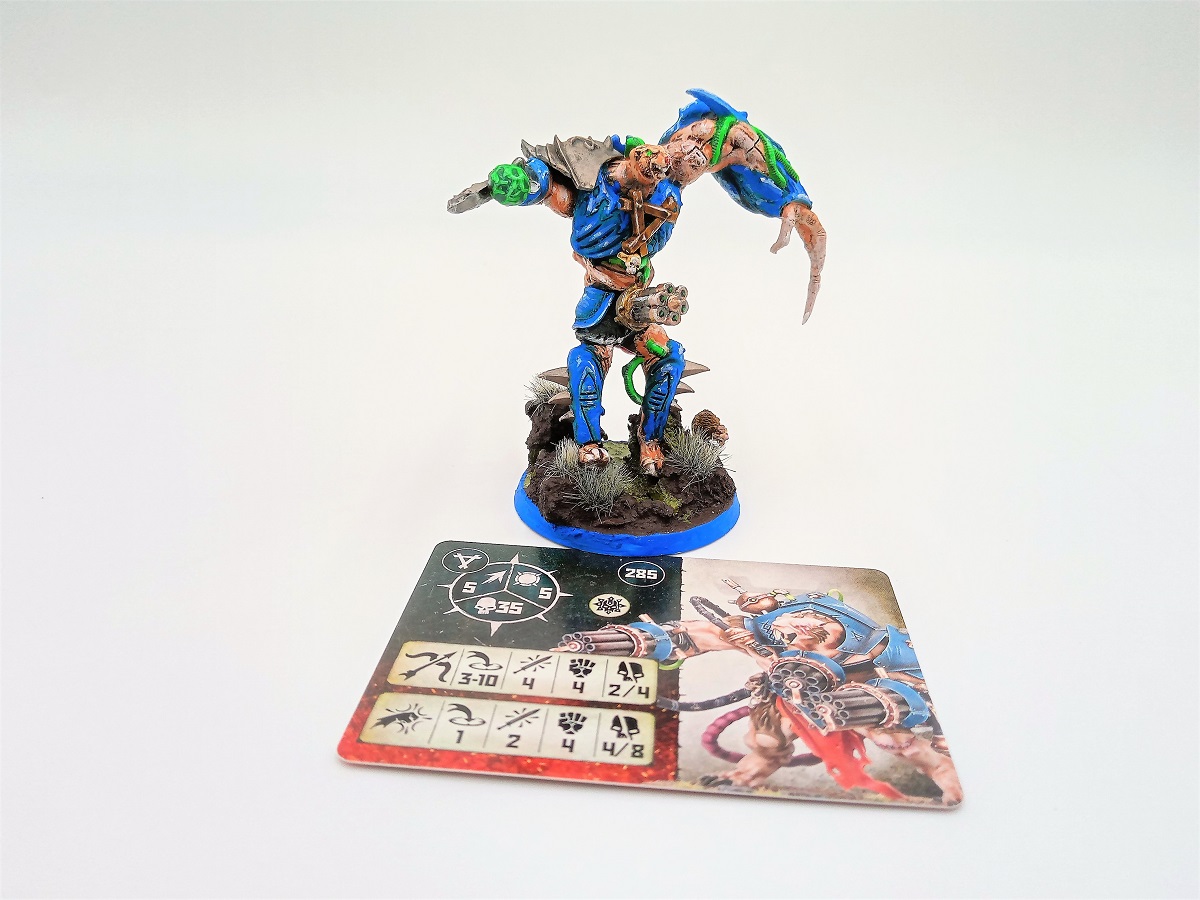 Overall, a quite well-rounded Skaven Warcry warband. To get 11 units for 1,000 points is quite unusual, and these rats really live up to their swarm-y nature. I’ve tested out this Skaven Warcry warband against a couple of different enemies, and both times they fared well, beating Ironjawz and Seraphon with relative ease. I think for my next battle, I might swap out the Stormfiend for a Rat Ogre and add in another Packmaster, but on the whole this is a great warband, and not bad at all for the minimal outlay.

Next time I’m returning to the Grand alliance of Order and will be putting together some Fyreslayers. Hot headed dwarves have always been a favorite of mine, so hopefully they’ll not disappoint.

Another Journey of Discovery For Nina And Her Neurons