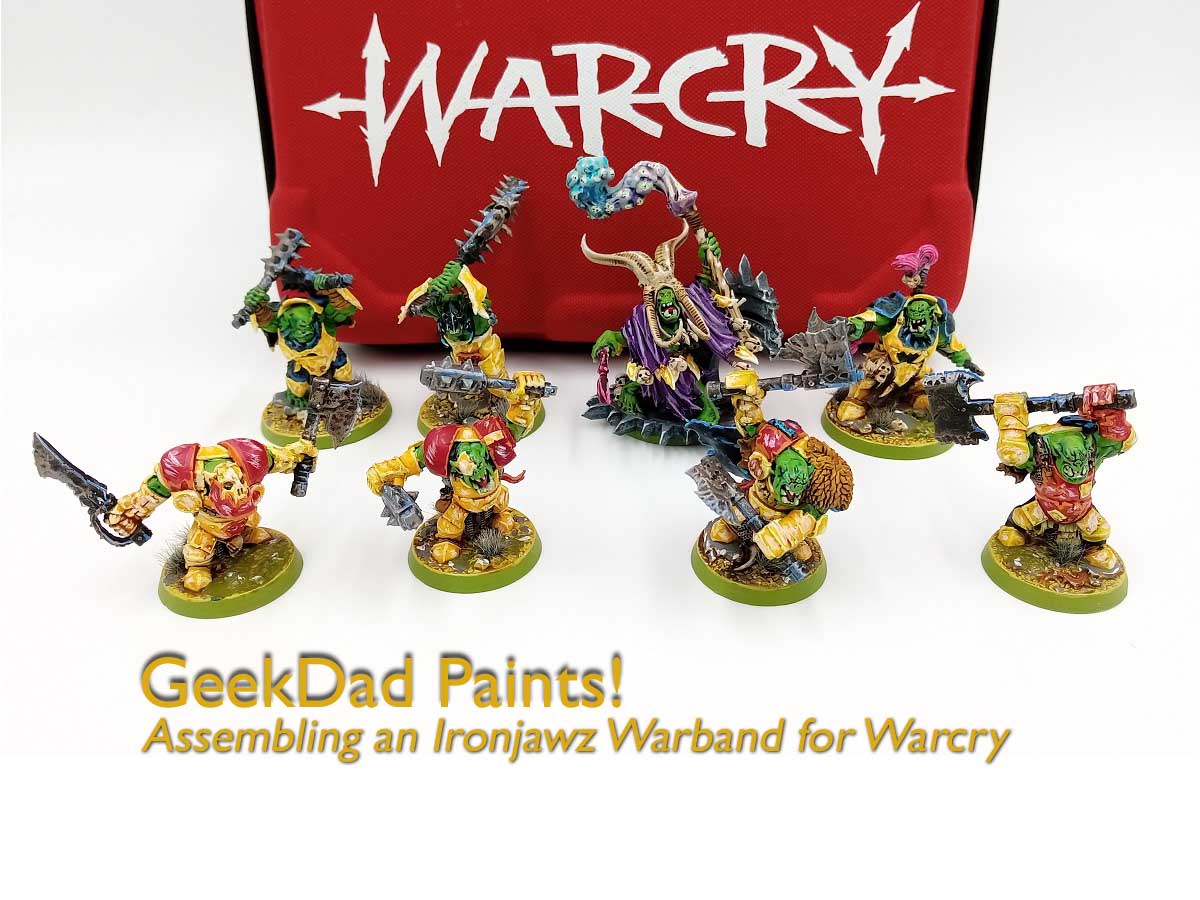 Now is the time for the mighty Ironjawz orruks.

The Ironjawz are huge hulking brutes than long for nothing more than a good scrap. Nothing is more pleasing to the Ironjawz Brutes and Aardboys than the sound of battle, and in Warcry these warriors represent the epitome of a “kill-focused” warband. High points value means you don’t get a lot of fighters in your merry mob, but they hit hard and can take lots of damage. The main drawbacks with the Ironjawz is their slow speed, but they make up for that with some really fun abilities. SO let’s see how I got on with selecting and mainting my models.

The armies in Warcry are broken down into four Grand Alliances: Order, Chaos, Death and Destruction. Each order has an accompanying book with includes all the fighter statistics for the armies of that order. The Ironjawz belong to the Harbingers of Destruction and that book includes over 20 different Ironjawz fighter types allowable in Warcry. For my warband I used five different types of fighter. 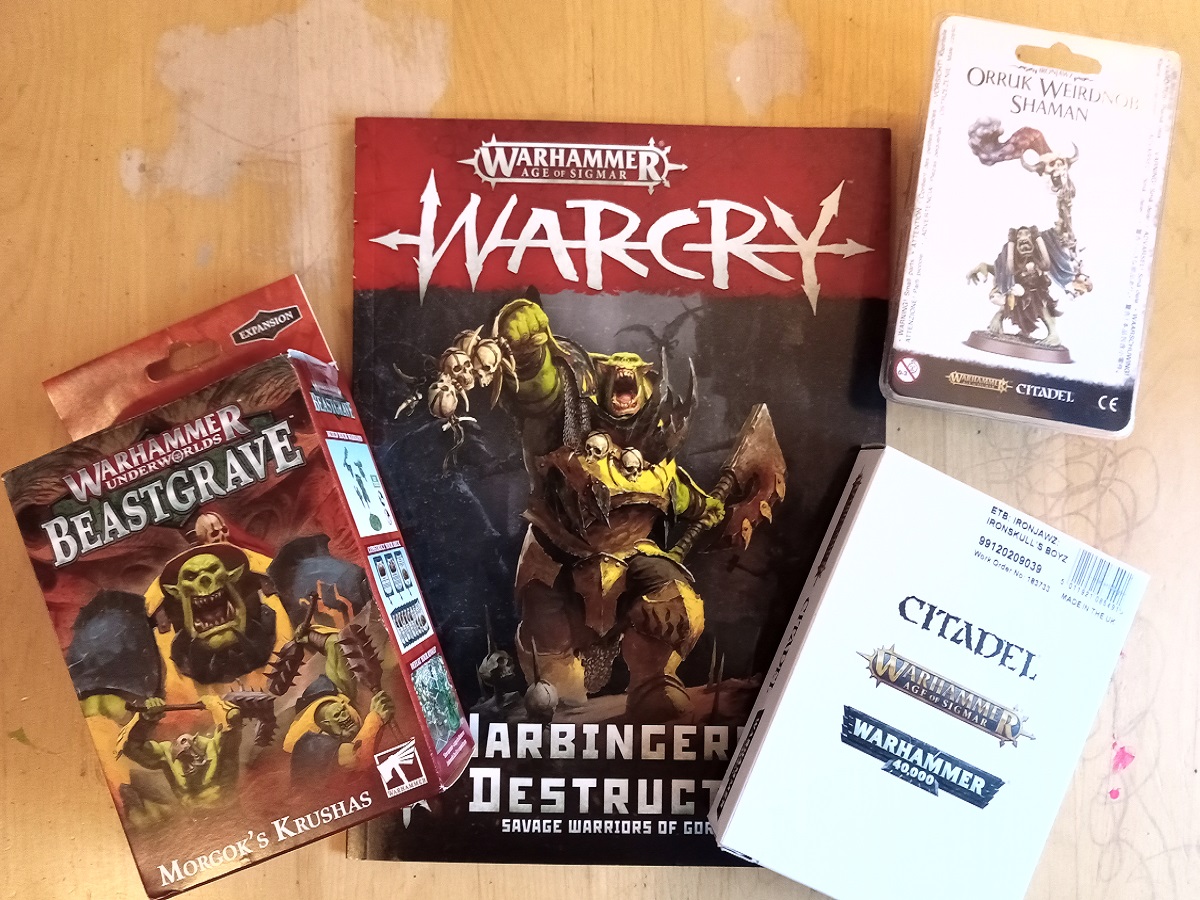 To help build my warband I picked up a copy of the Harbingers of Destruction but couldn’t get hold of the fighter cards as these are now out of print. So I had to improvise and found some templates online and printed off my own fighter and ability cards.

Note: Eventually I was able to pick up a pack of cards on eBay, but these were a bit pricier than I had hoped.

Games Workshop did release an Ironjawz warband for Warcry, but unfortunately I was too late to the party, and it’s now near impossible to get hold of for a sensible amount of money. So, instead, using the Forces of Destruction book and my improvised fighter cards, I selected the models I wanted. I then found two sets of Ironjawz that would make up the majority of my fighters. This included an Easy-to-Build Ironjawz set featuring Ironskull’s Boys, as well as Morgok’s Krushas from Beastgrave Underworlds. Both of these sets included Easy-to-Build models, but they still look really cool, and are actually much less expensive than the more advanced ones. I also added the oddly named Weirdnob Shaman in to the mix to add a bit of variety and some ranged attacks to my Ironjawz warband. In total this warband came to £55, which is a little more than the Warcry box, but seeing as you can’t buy that anymore, this seems like the next best way.

So, in total from the three sets I have:

To begin with I won’t be able to use all these models in a starter warband, so I’ll have to decide which ones to leave out. 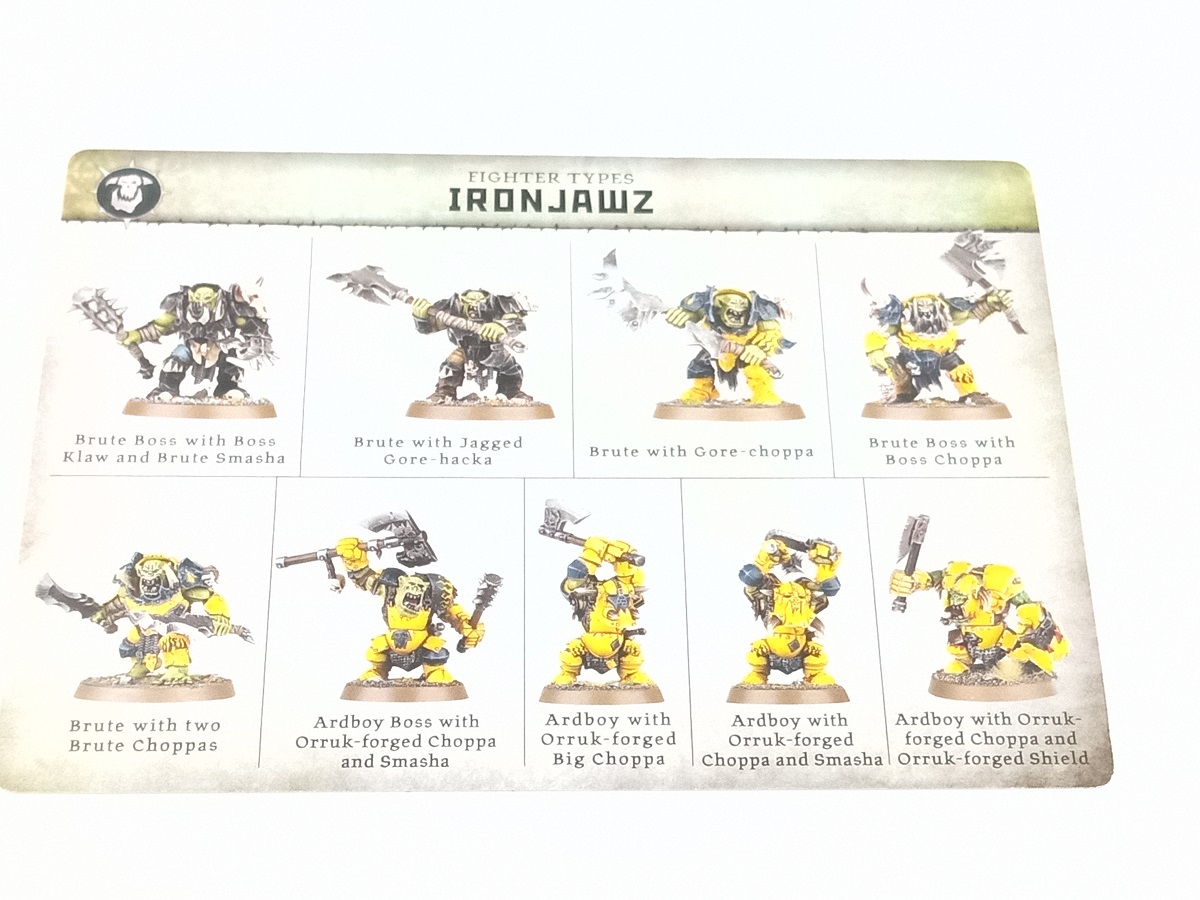 I wanted to keep some consistency within the warband so I kept the paint scheme relatively traditional and easy. I was using contrast paints, so they all started off with a primer undercoat of Wraith Bone. I find this is the ideal base coat for getting the most out of the Citadel contrast paints. 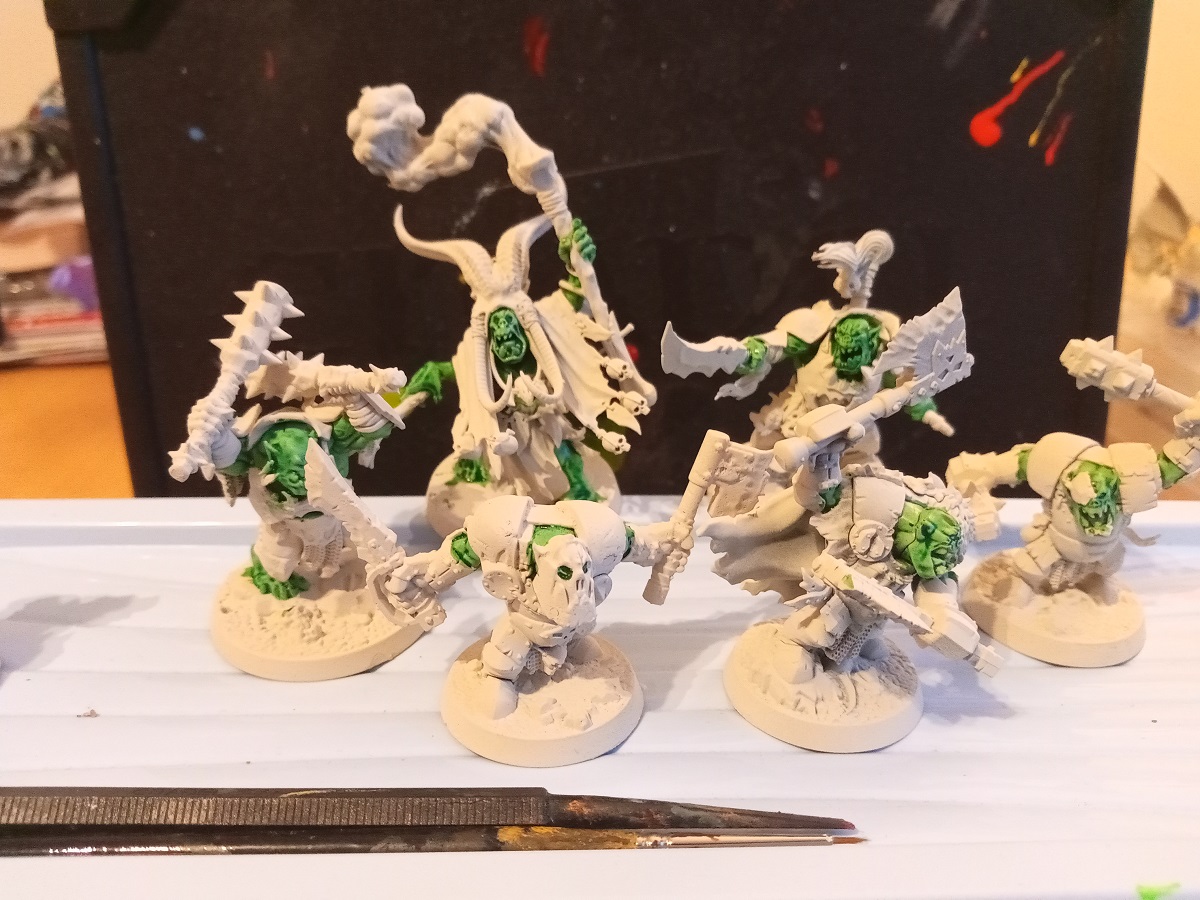 For their green orruk flesh I used the aptly named Ork Flesh contrast paint. I then shaded and highlighted this with fine layers of Warpstone Glow and Moot Green. For their weapons and metal chains I used a base of Leadbelcher and dry-brushed with Sycorax Bronze, before highlighting with Baharroth Blue.

I wanted to use the classic yellow armor featured on the cover of the books, and so to achieve this I used Iyanden Yellow contrast paint and highlighted with Flash Gitz Yellow and Dorn Yellow layer paints.

For the darker iron armor plates on my brutes I used Black Templar contrast paint and highlighted with Lothern Blue and Baharroth Blue.

And for the Red armor sections on the Aardboys I used Blood Angels Red and highlighted with Fulgrim Pink and Fire Dragon Bright. 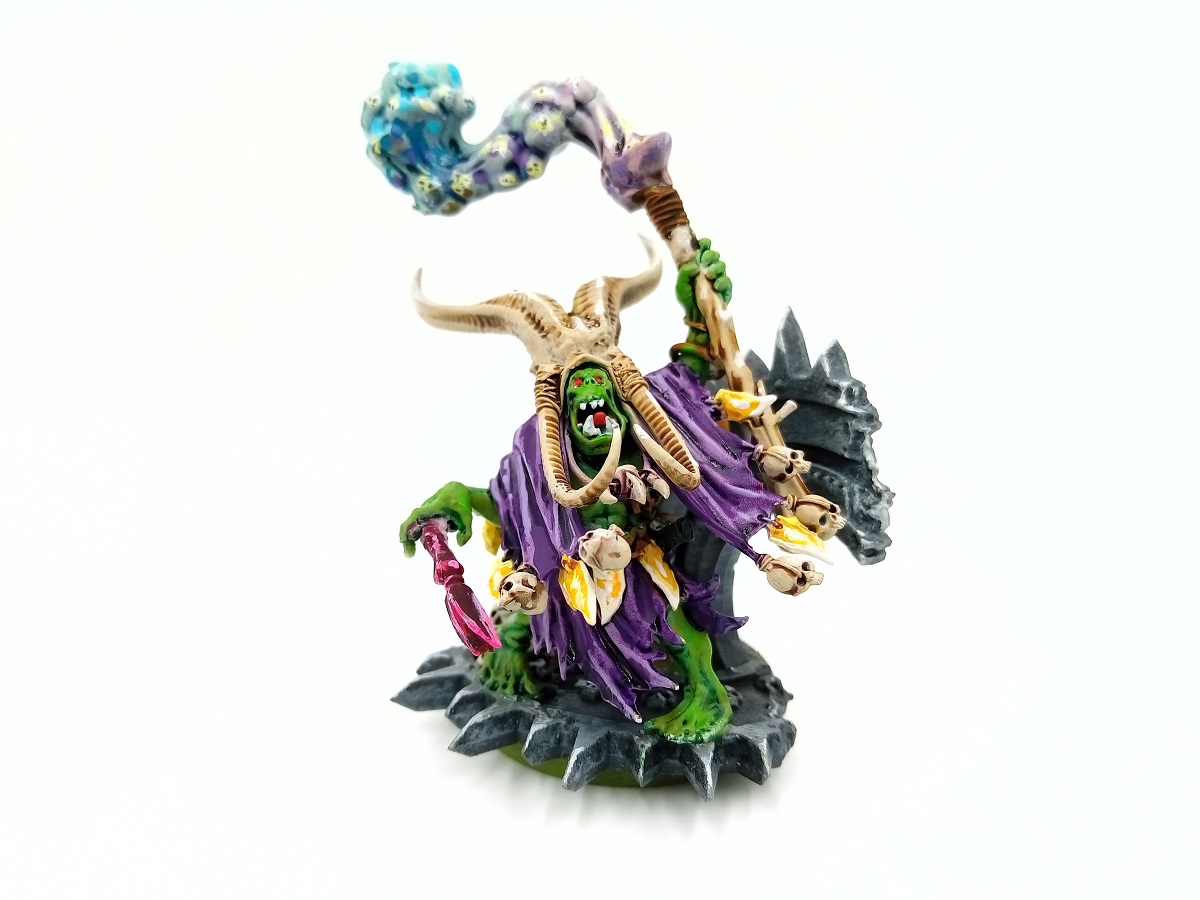 Finally, for my Weirdnob Shaman I used the same yellows and reds where I could and used Skeleton Horde and Snakebite Leather contrast paints for the bones and belts. I also used Shyish Purple for the cape and a blend of Volupus Pink and Aethermatic Blue for the smoke. I modified the shaman too, giving a new headdress and a wand from some left over parts from my Mindstealer Sphiranx .

The bases for the Easy-to-Build models (both the Brutes and Aardboy sets) come with features molded into them, so I didn’t need to do anything fun or exciting with modelling clay or cork or sand. Instead I used Iyanden Yellow contrast paint and then layered the rocks and stones with Mechanicus Standard Grey and Dawnstone. I also included some Nurgles Rot technical paint to create pools of swampy liquid and a few Army Painter Swamp Tufts as well. 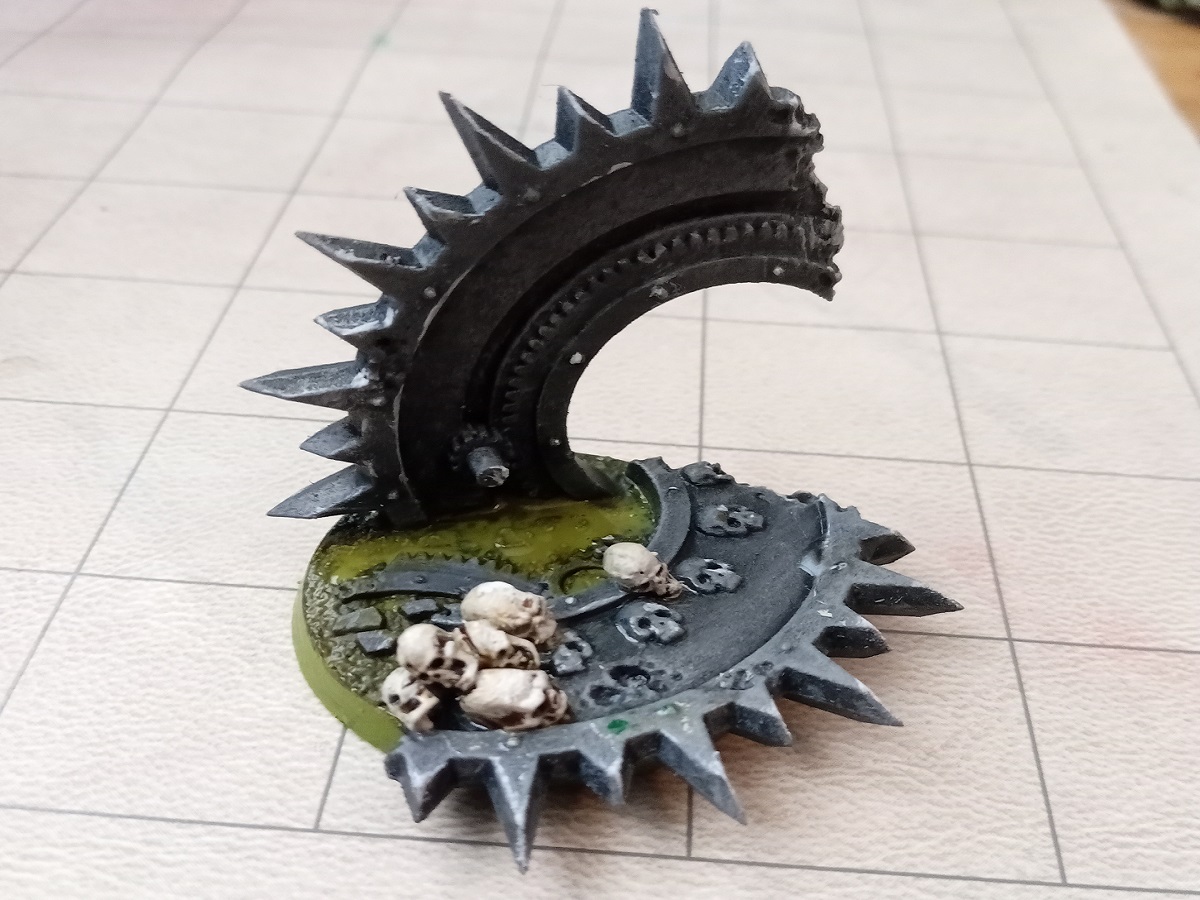 My Weirdnob Shaman, however, didn’t come with a ready-sculpted base, so I instead used a base from a Hero Bases set I picked up earlier in the year. I added some Skulls and Nurgle Rot swampy features too and ended up with the rather extravagant base. Perfect for my rather extravagant leader.

With my models complete I had my 1,000 point Ironjawz warband ready to go.

My Weirdnob Shaman would be the leader. For 235 points he’s quite expensive – so are the rest of the Ironjawz! – but he does have the triple ability Foot of Gork which is a good ranged attack that can do up to 18 points of damage. He also has the universal Ironjawz abilities – which all the following fighters have – Charge! and Rampaging Destroyer. As a leader he also has the ability Waagh! which adds additional movement to allies within range – really helpful for such a slow moving warband. 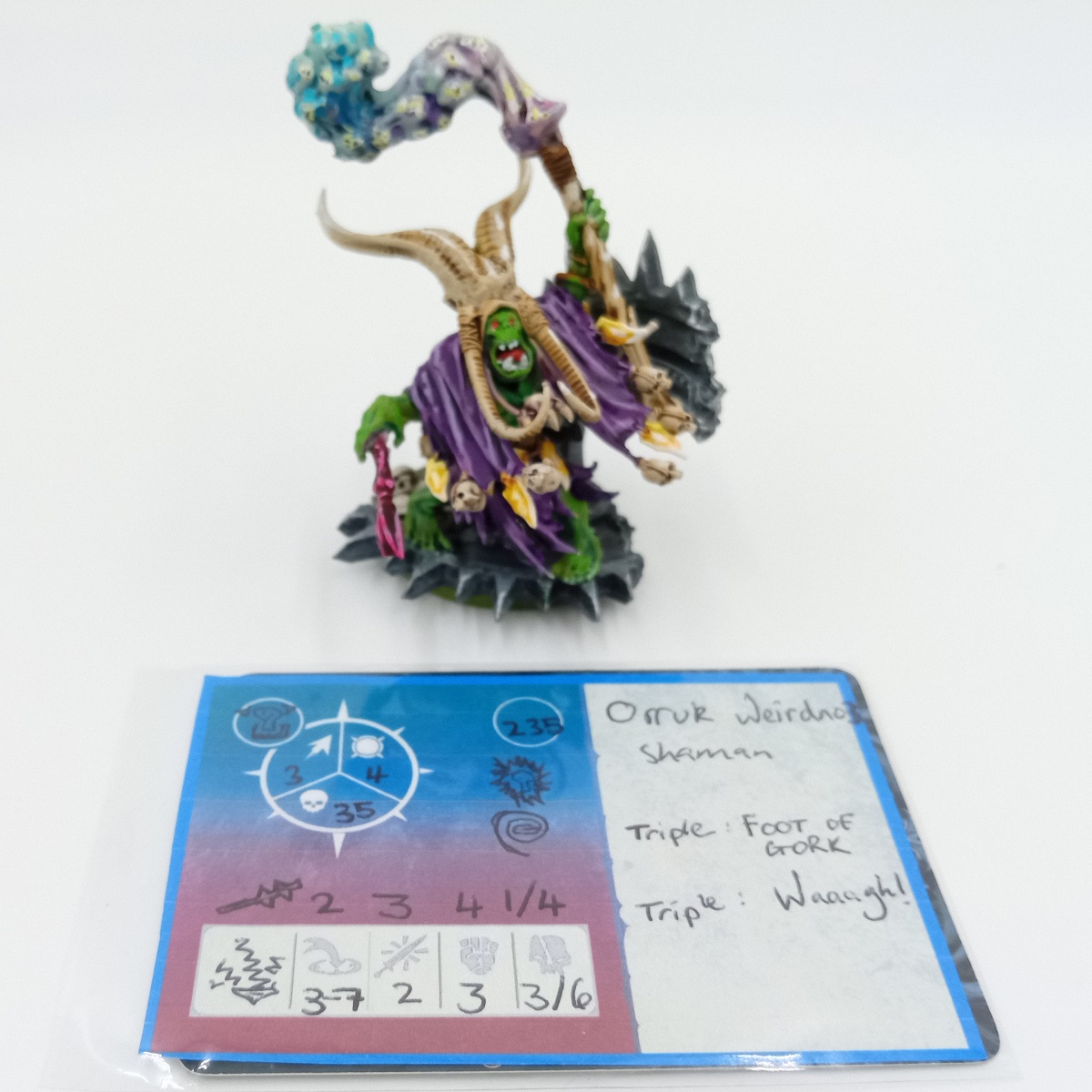 I’m then using two of the fighters from Morguk’s Crushas as Brutes with two Brute Choppas. they are 180 points each and have the ability Duff up Da Big Thing which add bonuses to their strength and attacks when they are fighting powerful enemies. 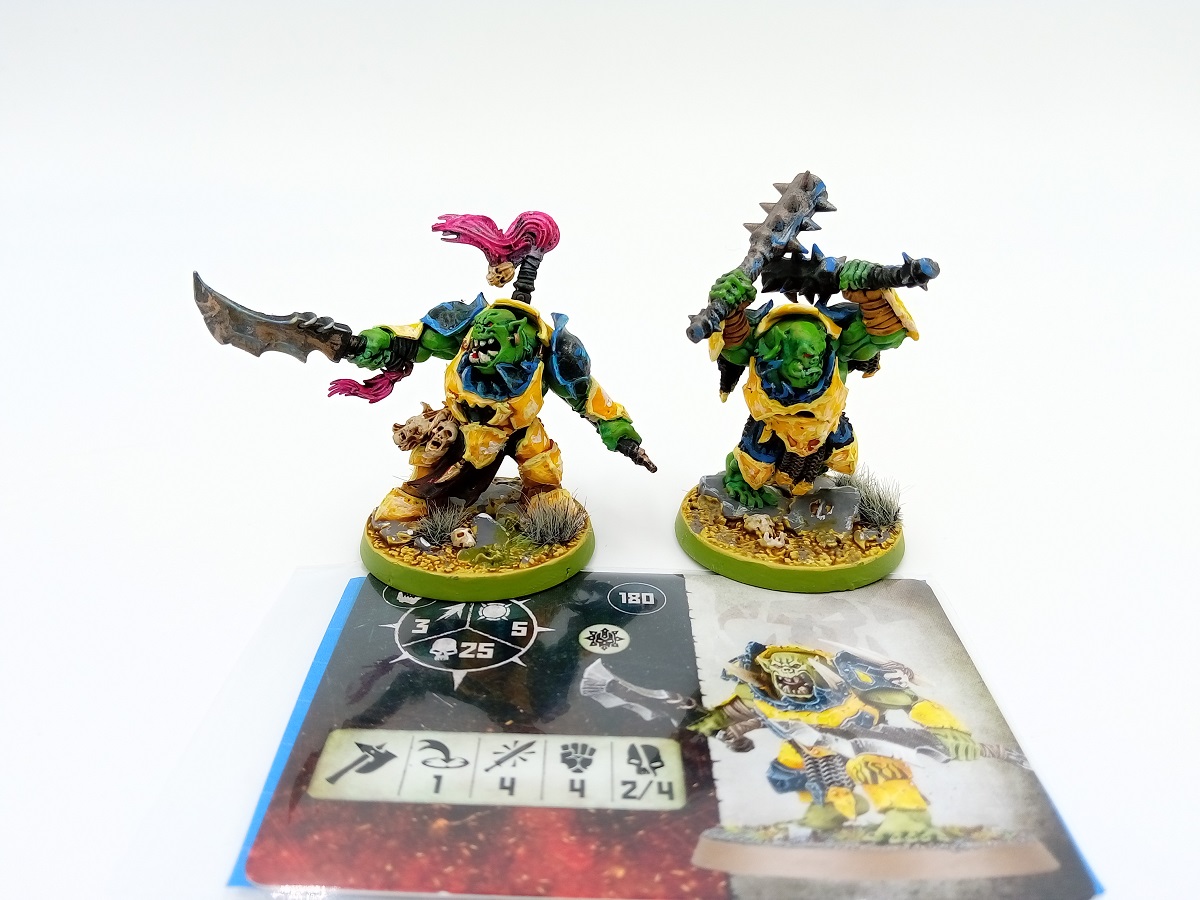 The final Morguk’s Crushas is a Brute with Jagged Gore-hacka. They have the same cost and ability as the other brutes (180 points), but make one less attack at a higher power output. 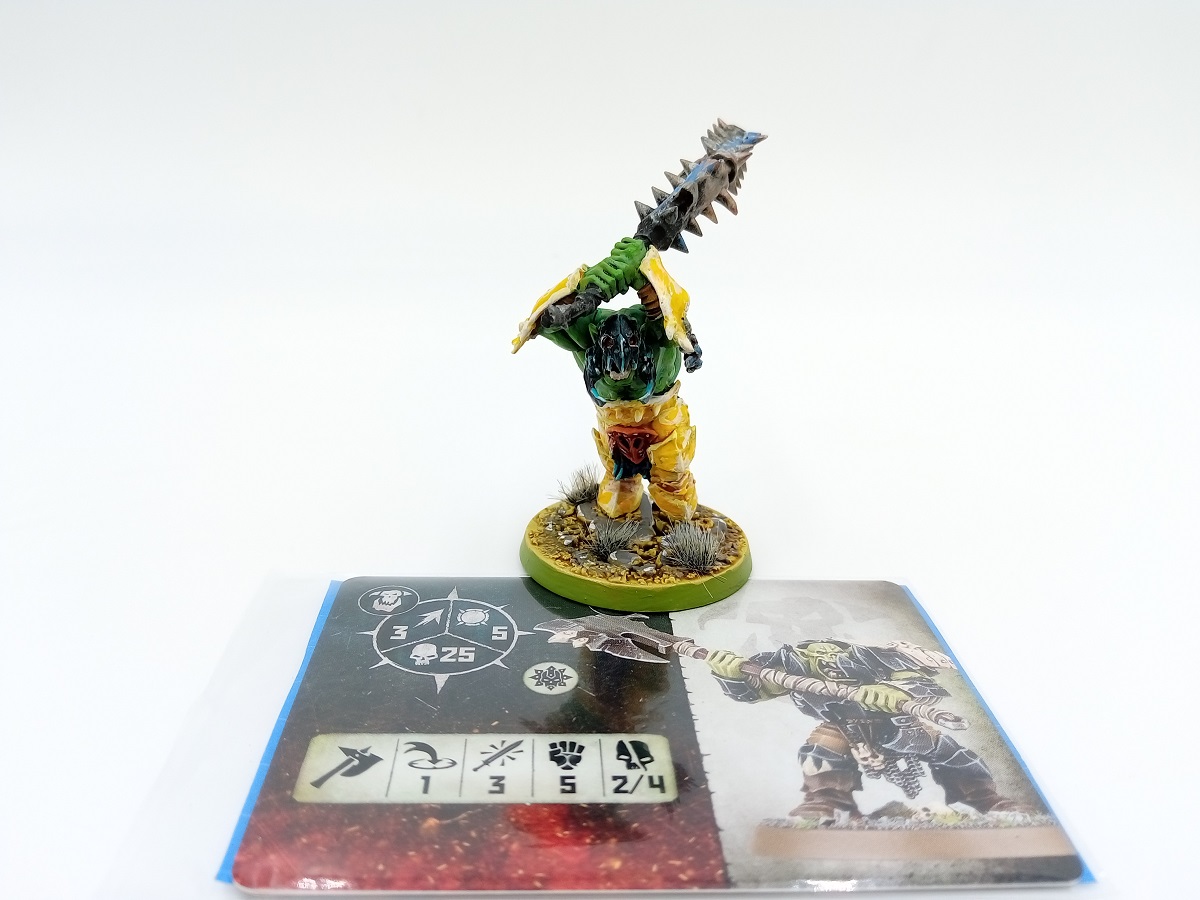 Then I’m using one of the four Ironskull’s Boys as an Ardboy with Orruk-forged Choppa and Smasha. At 110 points, they cost less than the brutes, but don’t have any additional abilities and have less hit points. 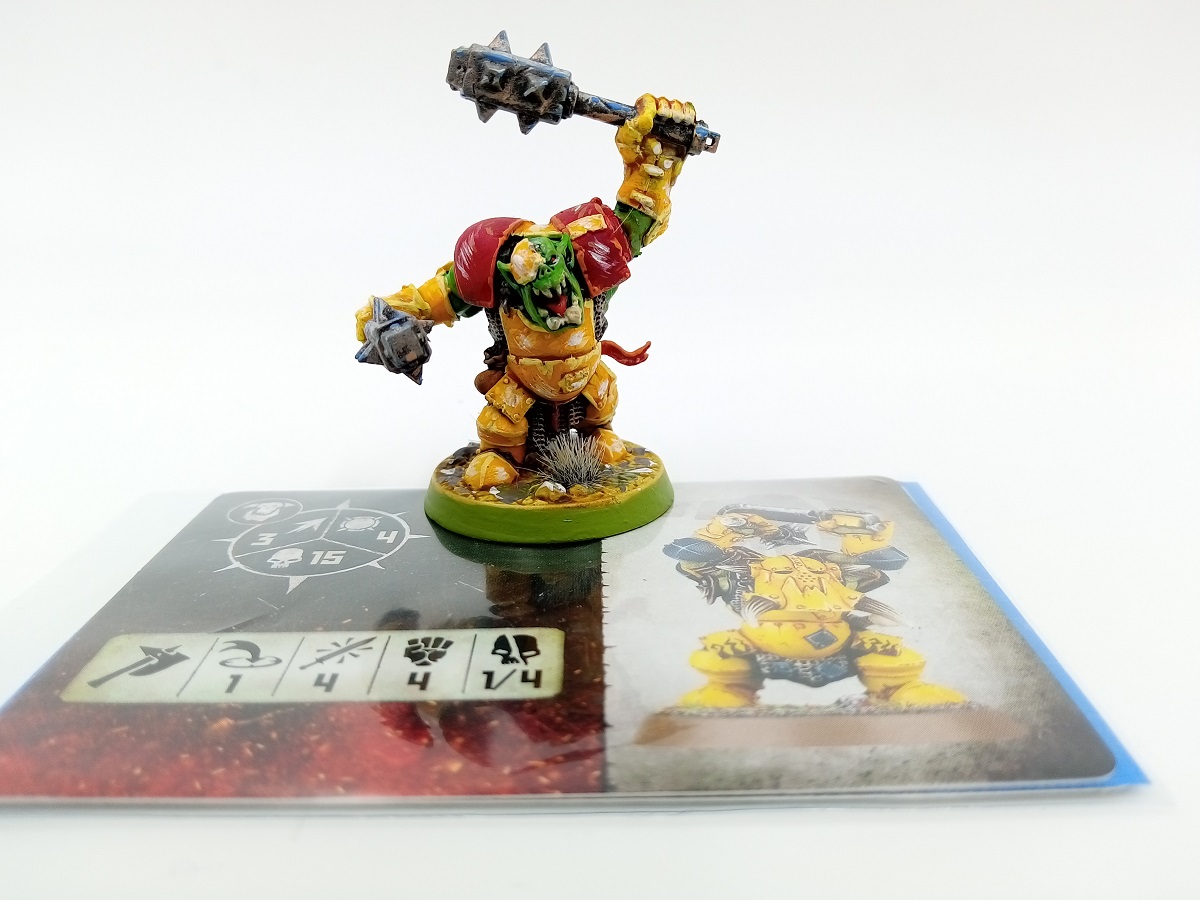 And finally, my sixth Ironjawz fighter is another of Ironskull’s Boys. Im using him as an Aardboy with Orruk-forged Big Choppa, similar to the other brute, same cost (110 points) but with a slightly different range of attacks. 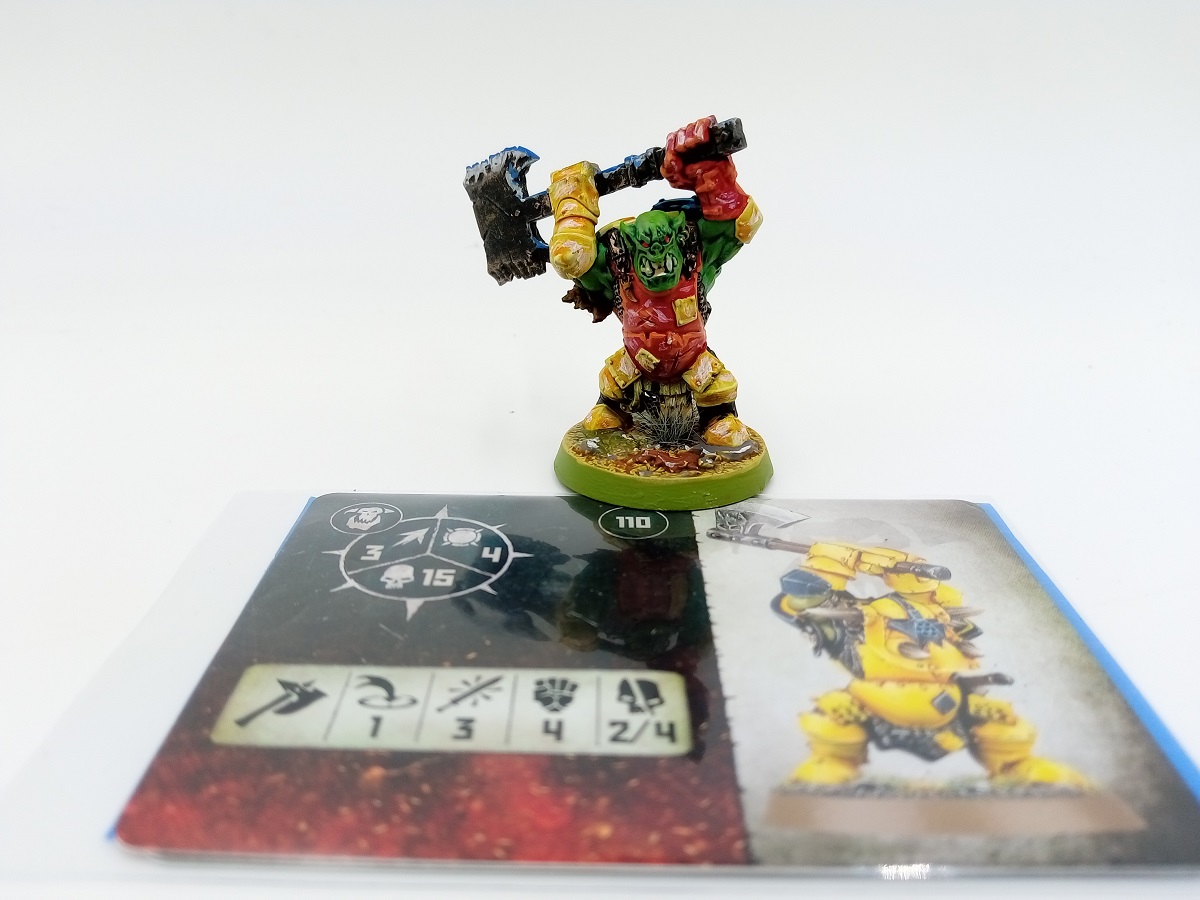 Overall, I’m pretty pleased with this warband. I’ve tested them out a couple of tmes versus my Seraphon and Nighthaunt and they fared OK. They could do with a couple more fighters in the warband – especially for objective based missions – so I’ll probably add ane or two Gloomspite Gitz goblin allies once I can afford more points. I’m quite happy with how the painting turned out too, in spite of my skills deficit I think these will do the job nicely and stand out well on the battlefield.

Next time I’m moving on to the Chaos Grand Alliance and will be attempting to put together a Skaven army. A very different style to the few-but-mighty Orruks, the Skaven are ratfolk and come in swarms of up to 15 fighters.