Ray: The tragedy of The Killing Joke and the time Barbara was in a wheelchair is always at the background of the character’s story ever since she was rebooted as Batgirl in the New 52, but I don’t feel like it’s ever been confronted in as intimate a manner as in Batgirl #27. The last issue saw Batgirl get her implant shorted out by Grotesque in battle, which led to her suffering a seizure in her father’s office.

When she wakes up in the hospital this issue, her implant is still working, but it’s risking a complete failure which will not only cost her the use of her legs but possibly result in brain damage. She’s scheduled for a replacement surgery, and her father insists on taking her home to recuperate until her surgery – and, most likely, to keep an eye on her so she doesn’t exert herself. Back in her father’s home, we get a great look at the dynamics between the two of them, and the way Barbara dealt with her father’s unconscious ableism while she was paralyzed. For the first time in a while, a writer is giving Barbara a little more of Oracle’s voice again. Her inner voice is stronger than in any issue I can remember.

What doesn’t work quite as well in this issue is the rest of the plot. Grotesque, originally created as a high-end art thief who was a fairly minor enemy of Batgirl’s in the Gail Simone run, has now been reinvented as a serial killer targeting the rich. This is a villain character type we’ve seen a lot recently, and while Grotesque is definitely a lot more intriguing than the Citizen, he’s still a bit of a cliche.

This issue reveals the truth behind the difference – the real Grotesque is dead, one of the new one’s victims. That makes this a very similar case to what we saw years ago with Anarky when the General impersonated him. As Barbara’s condition begins to deteriorate further, she winds up in a compromised position that leads to her being framed by Grotesque for the original’s murder. It feels like we’ve seen Batgirl chased by the local police a lot, and especially with her back in Gotham the cliffhanger feels weak – the police in Gotham are used to assuming the Bat standing over a dead body is there to investigate, not the killer. The plot issues aside, this is one of my favorite takes on Barbara Gordon in a while and I’m hoping Scott’s on this book for the long haul.

Corrina: I interviewed Scott about her Batgirl run this week for GeekMom. That meant I read this issue with her words in mind, especially her comments on TKJ, which is that Scott’s only interested in that book so far as it pertains to Barbara Gordon, and she views the events of that book as part of Babs’ life but not as the defining event.

That fine line is being walked in this issue, in which Babs’ implant is one of the many obstacles she has to overcome to fight the new Grotesque. And you can see it as well in her conversation with her father as well.

Babs is clear-eyed about what happened to her and how she feels about it. Jim still views his daughter as somewhat of a victim who needs to be protected, physically and emotionally. It’s beautiful characterization because it gets to the heart of each person. Jim, who sees the worst of the world, is a protector who’s always going to be afraid for his daughter in Gotham, no matter how much he logically knows she can take care of herself. Babs is always going to do what she wants to do, no matter what anyone, even her father, wants her to do.  Again, from the interview, Scott said that while Babs and Jim love each other, Babs is not been a perfect daughter and Jim is not a perfect parent.

And all that fits into Babs’ determination to follow up on her case. Gordons don’t give up, even risking brain damage. Indeed, that’s not Babs’ biggest problem by the end of the issue–that’s being wanted for murder.

I have high, high hopes for this run and Scott is meeting them. 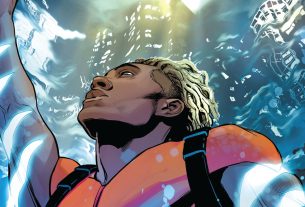