At this point in the proceedings, I’d be remiss if I didn’t spend a moment talking about the end of last week’s Arrow, specifically the flash-forward. Now that we know that it’s not Felicity in the grave (did you ever think it would be?), the speculation train has jumped rails, from Who’s in the grave? to Where’s the ring?

The shot above does two things. It shows up that Felicity is indeed NOT wearing the engagement ring Ollie gave her, and it implies tension. Sorrow is to be expected at a funeral. Outrage, even. But look at the positions of the two actors. Their body language, coupled with the conspicuous absence of the ring, suggest tough times ahead this season for Felicity and Ollie.

Now, onto this week’s episode of Arrow.

Cisco Ramon (Vibe) on The Flash. Mick Rory (Heatwave) on Legends of Tomorrow. These guys are polar opposites, yet both are the heart and soul of their respective teams. Okay, maybe the jury’s still out on Heatwave, but I really hope we see more of the character we saw in last week’s series premiere. Arrow has a pair of these characters. They’re two-thirds of the O.T.A.s. Original Team Arrow. They are John Diggle and Felicity Smoak.

The best episodes of Arrow are the ones that center around these two member of the team. Case in point… until now, the strongest episodes of the season were episodes 4.03. “Restoration”, and  4.07, “Brotherhood”. Just like how Doctor Who isn’t really a show about the title character, rather it’s about how his companions, who are our eyes and ears in that universe, relate to The Doctor, I believe that Arrow is at its strongest when we see the story unfolding through the eyes and ears of Diggle and Felicity.

This week’s episode focuses on two converging storylines centered on these two characters. I’m not going to give you a play-by-play of the action this week, because it’s not needed. This episode stands strongly on the shoulders of the relationships these two characters have with those around them and with themselves. So, enough talk. Let’s get to it.

The team is taking Darhk’s advice from last week’s episode. They’re taking the next couple of weeks to spend time with their loved ones before the HIVE-pocalypse. For Ollie, that means taking care of Felicity in her compromised physical state as she transitions back into their apartment. While battling his own fears and guilt over his role in Felicity’s injury, Ollie’s being the supportive partner. For her part, Felicity appreciates it, but stiffens at Ollie’s suggestion that she get back in the saddle and rejoin the team. 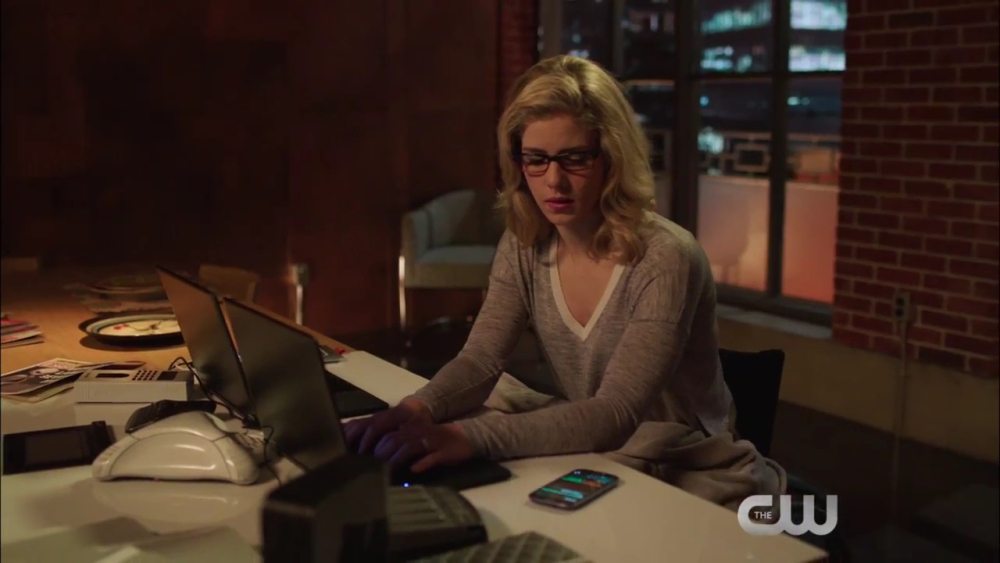 I understand that Ollie and Felicity are a couple and that they are going through this together, but this show has had problems in the past with funneling the attention through Ollie. What does Ollie think? How does Ollie react? What is Ollie going through. That’s one way in which Arrow is different from something like Jessica Jones. On the latter, bad things happen, but the show isn’t all about what the title character thinks. Each victim has the screen time to deal with what has happened to him or her. I am overjoyed that the writers and producers at Arrow used this episode as an opportunity for Felicity to come to grips with her injury. Bravo!

Felicity’s mental recovery is facilitated by a pain killer fueled hallucination. Even though she was just a figment of Felicity’s imagination, it was good to see Hacker Felicity back. Hacker Felicity gives voice to the fears and feelings of inadequacy that have Felicity all blocked up. In short, Felicity sold out. She traded her black hat (make that her goth look, complete with black hair) for a white hat (in this case, blonde hair, glasses, and a better wardrobe). Pretending to be a hero is what got her in this position. 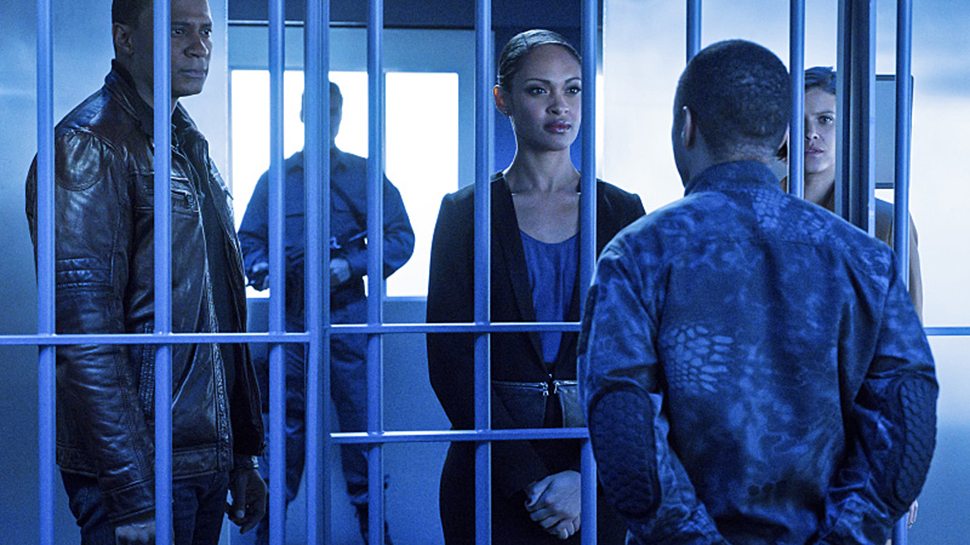 Meanwhile, Diggle is enjoying a rare date night with Lyla when one of her old ARGUS contacts tells Lyla to go to Waller, that he has been compromised and can only trust Lyla because she’s no longer with ARGUS. A black van and a bunch of paramilitary personnel abduct and kill Alan, prompting Lyla and Diggle to let Waller know what’s going on.

Alan was working off the books for Waller, moving against a group known as Shadowspire, which Alan and ARGUS supposedly dismantled three years ago. Diggle recognizes the symbol Shadowspire uses. He saw it before, during his military duty in Afghanistan. If anyone would know about secret terror organizations, it would be the guy who was there in Afghanistan with Diggle, who worked for a time with Shadowspire before faking his own death to join another, more powerful shadow organization.

I’ve said all season that the flashback gimmick to Ollie’s time on Lian Yu–this version of that time–is getting played out. Tonight was a perfect example of how to use the flashbacks to effectively enhance the story again. It’s not the first time we’ve gotten another character’s flashbacks. It’s not the first time we’ve gotten Diggle’s flashbacks. It is certainly a much better use of the device than we’ve seen all season. Another bravo!

Diggle is slowly warming up to Andy, seeing him once again as his brother, as someone with whom Diggle has years of shared history. Diggle and Lyla take Andy from his cell at the Arrow Lair to a new cell at ARGUS headquarters, where Andy tells Waller, Diggle, and Lyla that whatever you think it is that Shadowspire is after, you’re wrong. They are using misdirection. The target isn’t a shipment of railguns. The target is ARGUS.

With Lyla held hostage and the team out of touch, Diggle hotwires one of the surveillance monitors to send a message back to the lair (using a trick he learned from Felicity), straight to Felicity, who has worked past her own fears and issues and is able to work her techno-magic to get Ollie, Thea, and Laurel inside and to Diggle before Shadowspire takes control of something called Rubicon.

It’s Diggle’s trust in his brother and Felicity’s trust in her decision to try and make a positive difference in the world that allows the team to stop Shadowspire with minimal casualties (Waller? I hardly knew ‘er!). In the end, Felicity delivers a moving but–based on the flash-forwards we’ve seen–highly inaccurate speech about how it won’t be out of guilt or vengeance or regret that they take down Darhk, but because that’s who they are. Diggle and Lyla decide that the next step in the rehabilitation of the relationship of the two Diggle brothers is to move Andy in with them, where he can find some peace living a normal life among those who care about him.

Well, Arrow fans, what did you think of this week’s episode? Did you find it as strong an outing as I did? Do you think that in this world of speedsters, shrinkers, time travelers, and flying men that Felicity will walk again? Is time course-correcting after The Flash hit the reset button on the Vandal Savage fight?Do you think Andy will continue to be redeemed, or will we be cursing his sudden but inevitable betrayal?