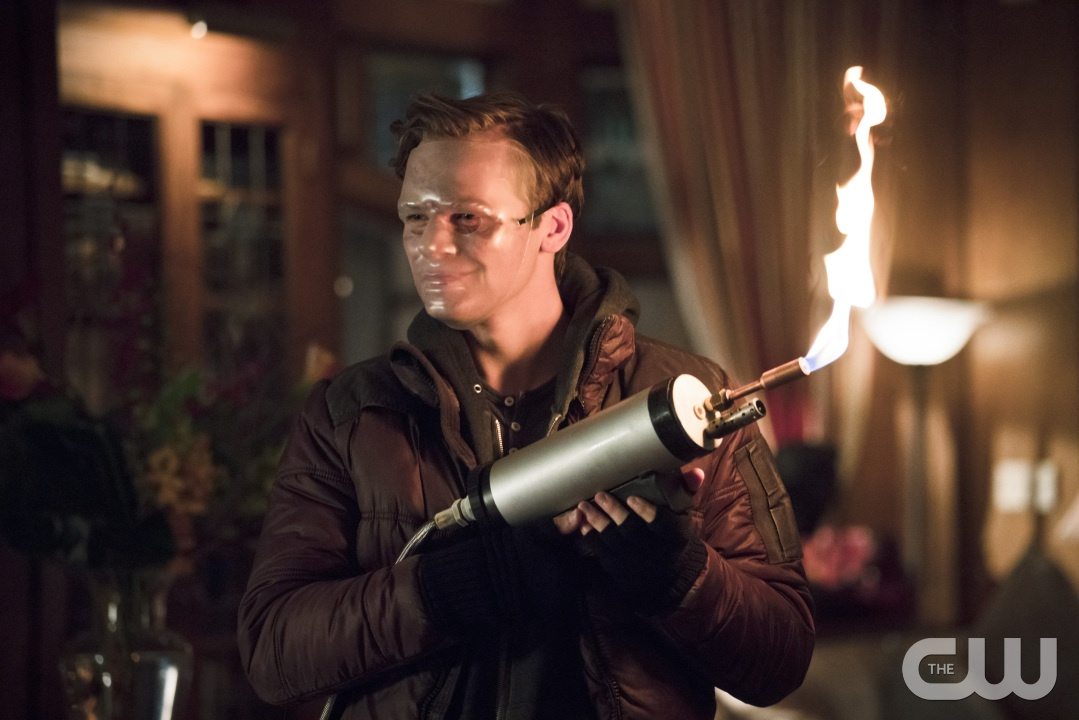 Welcome back from the holiday break. I hope yours was better than Team Arrow’s. Lest we forget, Darhk’s ghosts attacked Ollie and Felicity, shooting up their limo and sending Felicity to the ER. Jumping right into it, this week’s episode opens with the flash forward. The one that closed the fourth season premiere. The one that prompted this discussion about who might be in the grave. This week’s version of the flash forward says the scene in question is now only four months away… just in time for May sweeps!

From the graveside, we get quick cuts between the medical staff trying to save Felicity and Green Arrow working over the ghosts, trying to get something–anything–that might lead him to Darhk. Diggle does the same back at the bunker, bloodying his knuckles raw trying to get information from Andy. The longer Darhk stays off the radar, the less likely the team is going to find him in time for it to make a difference. Ollie plays his last card. He asks Quentin where he and Darhk meet, knowing that doing so will cost the team their man in Havana. Their insider. It’s a last-ditch effort.

Green Arrow arrives at the high-rise, only to find dead ghosts in the halls. Someone with his own vendetta against Darhk beat him there. Someone painting the A for Anarky in blood on the walls. Lonnie Machin is back and has better intel on where to find Darhk than Team Arrow.

Machin’s return causes Thea distress. She burned and disfigured Machin the last time the two squared off. That was back when she was still under the effects of the blood lust. Since Darhk’s attempted voodoo touch on Thea backfired, Thea’s lust has been under control. But, with Machin’s return to remind her, Thea starts to doubt whether she can ever really be from the effects of the Lazarus Pit. She wants that walking reminder of her weakness put away for good.

Ollie is so obsessed with finding Darhk that he doesn’t have time to visit Felicity in the hospital. She understands, but fears that maybe Ollie doesn’t want to be with her now that she’s looking at life in a wheelchair. Did they just give us the DC/CW TV version of Oracle?

The more time Ollie spends away from Felicity, the farther he strays into the darkest part of his personality. And that makes Ollie dangerous. Lance doesn’t approve. “So, you’re dropping bodies again?” The rest of the team doesn’t approve. Diggle, the moral foundation of the team, reminds Ollie that he can’t go back to what he once was. Ollie can’t lose his tether to the better part of his humanity. Ollie needs to go spend some time with Felicity.

Not that Diggle came by this wisdom on his own. Diggle did stop off at home between sessions of “Thump on Little Brother.” Lyla is Diggle’s tether to his better nature, and Lyla is there to point out what is obvious to any ARGUS-trained agent. If treating Andy like a ghost isn’t working, then try treating him like your brother. And you thought all ARGUS knew how to do was torture during an interrogation.

SCPD forensics identified the blood Machin used to paint the HIVE red wasn’t from the ghosts. It was from Machin’s foster parents. The team catches Machin at his former foster parents’ home and move in. Somehow, they weren’t expecting it to be a trap… you know, with Machin using the blood in order to send a message to Darhk to stop by the house. The trap is sprung. Thea confronts Machin, and, in doing so, is forced to confront the darkness within herself.

The team takes Machin to an abandoned warehouse, where Ollie tries his hand at interrogation (these guys are seriously bad at this part of the job), but has to leave when Thea gets a text from Donna saying that Felicity is out of surgery but the news is bad. Ollie heads to the hospital. Machin does his best Joker impersonation. He wins if Thea kills him. She will be completely corrupted then. No coming back. Before Thea can wrestle with the choice, SCPD arrives and apprehends Machin.

At least Diggle is following some good advice. Andy reminds Diggle of the last time big brother took little brother behind the woodshed like this. Andy is crying out. He’s doing more to try and make a connection than Diggle has up to this point. So, Diggle changes his tactic. He tells Andy that Darhk hurt an innocent, someone better than both of them, and Diggle needs to make this right. Andy gives up a name. Stonehaven.

With me so far? Pretty straightforward, right? Good, because this is where the wheels start to come off the wishy-washy bus.

Ollie disables the SCPD prisoner transport and sets Machin free, telling Anarky to go get his revenge on Darhk and to “make sure he’s dead.” Thea pops in at campaign headquarters (don’t forget, Ollie’s still running for mayor, too) and tells Alex that she needs to pull away from whatever relationship they might have.

At least Ollie’s flip-flop had a purpose. When he freed Machin, Ollie placed a tracker on Machin. This was their ticket to finding Darhk. Only Machin disabled the tracker, so there goes that idea. With no Plan B (or are we up to Plan F or G at this point?), Ollie heads to the hospital.

Ollie comes clean with Felicity. He blames himself for her being in this condition. If he hadn’t held back, if he had gone all the way to that dark place and killed Darhk, then none of this would have happened. Felicity, always the light in Ollie’s darkest times, reminded Ollie that the city isn’t worth saving if it costs him who he is.

Finally, a convergence of clues leads the team to a quick stroll up the driveway at Stonehaven, where Machin is holding Darhk’s family and preparing to do a little burning and disfiguring of his own. Ollie stops Machin, who is just as confused as the rest of us by now. First the team caught Machin. Then Ollie let him go and told Machin to kill Darhk. Now, Ollie is stopping Machin again. Make up your mind, already.

While Ollie and Thea take on Machin, Diggle and Laurel get Darhk’s wife and child safely away. Machin runs and the Queens split up to try and find him. Thea manages to catch up to Machin, who tempts her again. Strike me down. Turn to the dark side. Thea overcomes the urge to kill Machin, which allows the psychopath to get away.

Meanwhile, Ollie runs into Damien Darhk himself, looking mad and using his magic to pull arrows from Ollie’s quiver and fire them at the Green Arrow. “Where’s my family?” Ollie tells Darhk that his team saved Darhk’s wife and child from Machin. Darhk tells Ollie to take the next couple of weeks and spend it with his own loved ones because this old world will be pulled down and a new world built on top of its ruins after that.

Wait, the best flip-flop is yet to come.

Nope. The episode ends back at the graveside. Back in the flash forward. Ollie gets in the back of the limo to leave the cemetery and who is with him? Felicity! Presumably, she stayed in the car since she’s unable to walk. And what does she tell Ollie? That Ollie has to “kill that son of a bitch.”

For those keeping score at home, that effectively removes Felicity from the “Who’s in the Grave?” list. So, now that you’ve updated your scorecards, tell me… who’s in the grave?

Final thought: unless there is something in the flashbacks this season that is going to somehow pay off… maybe something mystical that Ollie learns or uses to defeat Darhk (though I’m not sure why Ollie wouldn’t have used it yet), then they are wasted screen time. Seriously. Either make good on a payoff or stop with the gimmick altogether.

Be sure to check back tomorrow for our recap of the series premiere of Legends of Tomorrow. Same geek time, same geek channel! 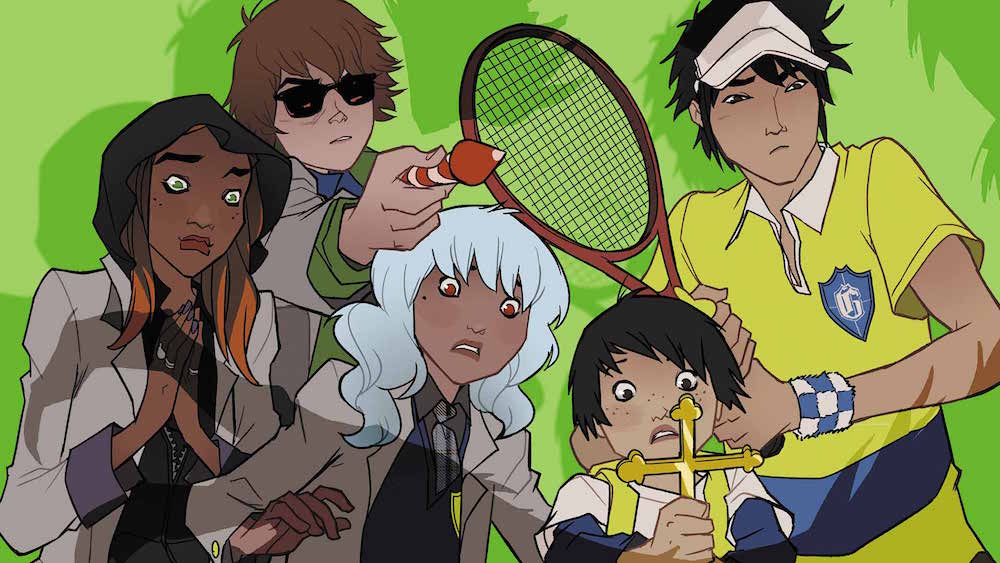