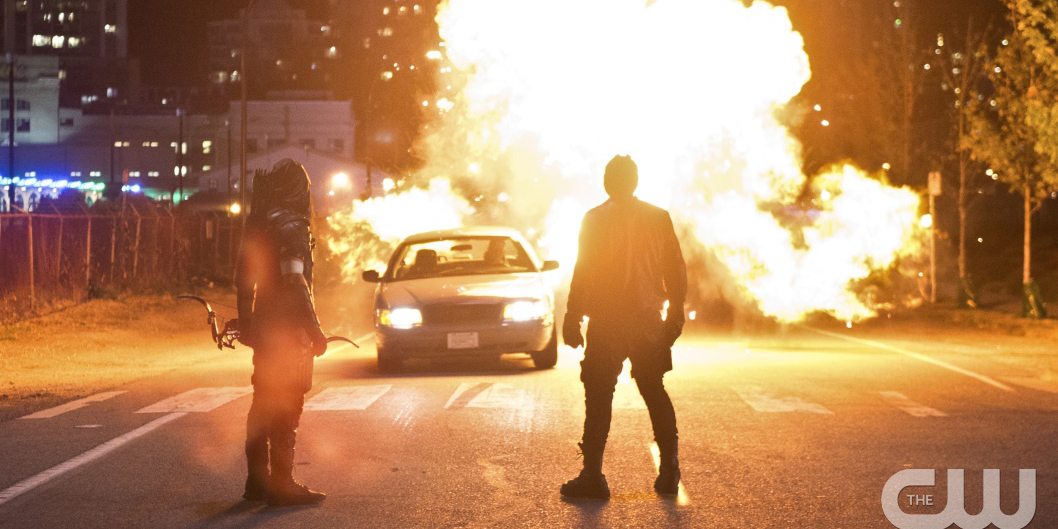 Restoration. That is the title of this week’s episode of Arrow. According to the internet, there are a half-dozen or so accepted definitions of the word “restoration.” They are all pretty much variants of the same principle, but the subtle distinctions in the definitions and the varied contexts where the word restoration might be used are what gives each definition it’s own flavor.

This week’s episode of Arrow presents the idea of restoration in a few different manners.

1) Restoration (noun): a return of something to a former, original, normal, or unimpaired condition.
Once upon a time, Ollie met John. Ollie saved John’s life, but in doing so was forced to reveal that Ollie was the Starling City vigilante. And John was cool with that. So, John joined the team. Ollie was a trust fund kid and John was a former soldier. Together, they had big dreams, but little know-how.

Other people have found out about the team. Most of them have been cool with it, too. In fact, there haven’t really been too many characters to say, “Whoa… wait a minute. You do what? Are you guys nuts? You know we have a whole section of government dedicated to policing the system, right?” Different people have come and gone from the team, but at its core–at the heart of the team–stand Ollie, John, and Felicity.

Then Ollie went and kidnapped John’s wife. Now John can’t forgive Ollie. At one time, John would have taken a bullet for Ollie. Now John doesn’t trust that Ollie would do the same. So, even though the team has been performing adequately since Ollie returned…

No, scrap that. The team has performed miserably. No matter how Felicity tries to sugar coat things and get the feels going, the team has been a disaster. With Laurel and Thea off on their spa treatment getaway, Felicity uses the time with just the three OTAs (Original Team Arrows) to get Ollie and John back on the same page.

Just how far apart these two guys have fallen is made clear in the episode’s pivotal scene. The HIVE leaders aren’t impressed with the job that Damien Darhk has done in Star City. Darhk’s partners are ready to move forward with whatever plan they have for the city (the word “genesis” was spilled at one point). So, they have sent their headhunter to recruit a meta-human who has playing card tattoos that he can peel off of his skin and use as projectile weapons. While Ollie is responding to a seemingly small-time fire and robbery, John is shadowing the headhunter, Fayad, who happens to be the same HIVE recruiter who hired Floyd Lawton to kill John’s brother Andy.

(Quick aside: this is the first time it’s been even hinted at that Darhk isn’t the head of HIVE. We’ve seen Darhk do some pretty incredible things. Evil things, sure, but incredible. Now, who could someone like Darhk possibly partner with or even take orders from? Are the “ghosts” the equivalent of stormtroopers with Darhk as their Darth Vader? If so, who is the Emperor in this scenario?)

Both Ollie and John botch their operations. Fayad gets away from John while Ollie escapes from the meta-human. Back at Arrow Cave 2.0, Felicity lays the verbal smack down on these two. Quit your pouting and figure out how to fix the breach between in your relationship before I get back here or so help me!

2) Restoration (noun): restitution of something taken away or lost.
Meanwhile, Laurel and Thea have decided to dig up Laurel’s dead sister Sara and take her with them, Weekend at Bernie’s-style, to Nanda Parbat for a reinvigorating soak in one of the resort’s acclaimed hot tubs. The nice man in the hood at the front desk leads the ladies to an audience with the resort’s new manager, Malcolm, and the daughter of the resort’s former manager, Nyssa, who are engaged in a duel to the death. Sort of. Nyssa would love to kill Malcolm, but has neither the skill nor a way to stop the healing waters of the Lazarus Pit from restoring Malcolm.

Laurel and Thea demand that Malcolm warm up Sara’s old bones with a quick boil then gentle simmer in the Pit. Malcolm explains to a new set of people looking for immortality that this is a bad idea. He even gets backup from Nyssa. Seems the two can agree on something.

Laurel demands that Malcolm fix this. After all, it was Thea, under Malcolm’s influence and at her father’s command, who killed Sara in the first place. Malcolm reminds Laurel that, in Nanda Parbat, it’s not the guests who are always right, it’s the management.

3) Restoration (noun): the act of reestablishment.
Thea has been suffering from the effects of being revived, or perhaps “restored” is a better word, in the Lazarus Pit. Malcolm explains to her that the only way to satiate the blood lust is to give into it. Feed it, like the hunger it is. Kill a couple of people, then have a Snickers. Horrified, Thea tells Malcolm that she is not going to go around killing people whenever she feels a bit peckish and that she’s withdrawing Malcolm from “father of the year” consideration.

Visibly shaken by this (what is the one trophy you need if you already have everything, including an army of ninjas?), Malcolm suggests Thea get some rest and that Malcolm will take her in the morning to see if the local shaman can give her anything to help with the craving to murder. What Malcolm doesn’t tell Thea is that even though there is no shaman, he has something in mind to get Thea past her urge to kill and to get himself back in the running for the award.

That night, Malcolm sends a couple of his ninjas (what’s a couple when you have an army?) to be slaughtered by Thea. Feeling better? Who’s your daddy, now?

Thea musters all the outrage she can now that she’s mellowed out and says that she and Laurel and presumably Sara’s corpse are on the next plane back to Star City and that they will not be giving Nanda Parbat a positive review online. But Malcolm has one more trick up his sleeve to prove to his now clear-headed daughter–who never gave her father so much as a “thank you”–that he is deserving of the title “#1 Dad” on the mug in his office. He agrees to let Sara have a little time in the hot tub, even though everyone and everything about doing so screams “bad idea.”

At first, nothing happens. Until it does. Sara’s body leaps from the Pit. What has come back from the dead doesn’t appear to be the sweet sister that Laurel barely tolerated, nor the ninja-assassin that Sara was trained to be when she first came to Nanda Parbat. I mean, really… who’d have seen that coming?

In the end, Laurel got her sister’s body reanimated, but we’re left wondering how this show is going to bridge from Sara’s resurrection to the seemingly normal version of her character that we see in the Legends of Tomorrow trailer. Yes, this was another setup for the next spin-off in the franchise, but handled this plot thread more elegantly than its counterpoint in this week’s episode of The Flash.

As for Thea’s relationship with Malcolm… there’s always next time, dad.

4) Restoration (noun): a putting back into a former position, dignity, etc.
Ollie makes it known that his work has turned up Fayad’s name. John understands that going after the HIVE’s headhunter alone has turned up one dead end after another, so he lets Ollie in on the secret that John has been keeping for two years now. John believes HIVE had his brother killed. Could be that by working together, the fellas can found out what reason the HIVE had for killing John’s brother and possibly bring down Darhk. But first, they’re going to have to deal with that pesky meta-human.

While the boys worked out their differences, Felicity has gone full-circle by asking her new miracle worker at Palmer Technologies to take a look at one of the playing cards the meta-human left behind. Curtis doesn’t buy the lame excuse, but knows whose name is scribbled at the bottom of his paycheck, so he takes a look and determines that the card could potentially be used to track down the meta-human, assuming he doesn’t track them down first.

Which, of course, he has done.

Felicity saves herself and Curtis by using the secret elevator someone had installed in the Palmer building (from now on known as “The P”) for just such an occasion. Curtis is now in on the team’s secret, and–to no one’s surprise–is cool with that. Ollie and John track down the meta-human trying to escape back to Central City where he can plague The Flash in some future episode, but, working as a team again, Ollie and John are able to bring in the meta, thereby killing that potential episode of The Flash in order to allow them to shoehorn more Legends of Tomorrow characters into that program.

Ollie even takes a bullet for John. Make that a meta-human tattoo playing card. The team is back on the same page. Felicity finally gets the guys to take her out for drinks. And Ollie reveals that Arrow Cave 3.0 is already in the works.

Final Thoughts:
Moira Queen pulling the family’s strings and keeping its secrets. Felicity being a love interest and a sometime damsel in distress, while at other times injecting Slade Wilson with a cure for Mirakuru or pulling out an assault rifle and opening up on a meta. Laurel and Thea going off on their own and never once talking about boys or shopping. How I wish the Arrow and The Flash writers could consistently create three-dimensional female characters together. This week’s episode of Arrow highlights exactly how to use female characters–the same way you would if they were males! I’d love to see Iris and Caitlin spend an episode of The Flash investigating and dealing with a situation while Barry, Cisco, Joe, Jay, and Professor Stein are off screen setting up Legends of Tomorrow.

We know from the end of the season four premier that someone is going to die by the end of this season, as seen in the flash-forward to six months in the future. Be sure to check back before next week’s episode of Arrow for a very special Same Geek Channel, where we handicap whose name is on the gravestone that Ollie and Barry are visiting in the flash-forward.

Catch up with this season of Arrow on Same Geek Channel:
Episode 4.01: Green Arrow
Episode 4.02: The Candidate