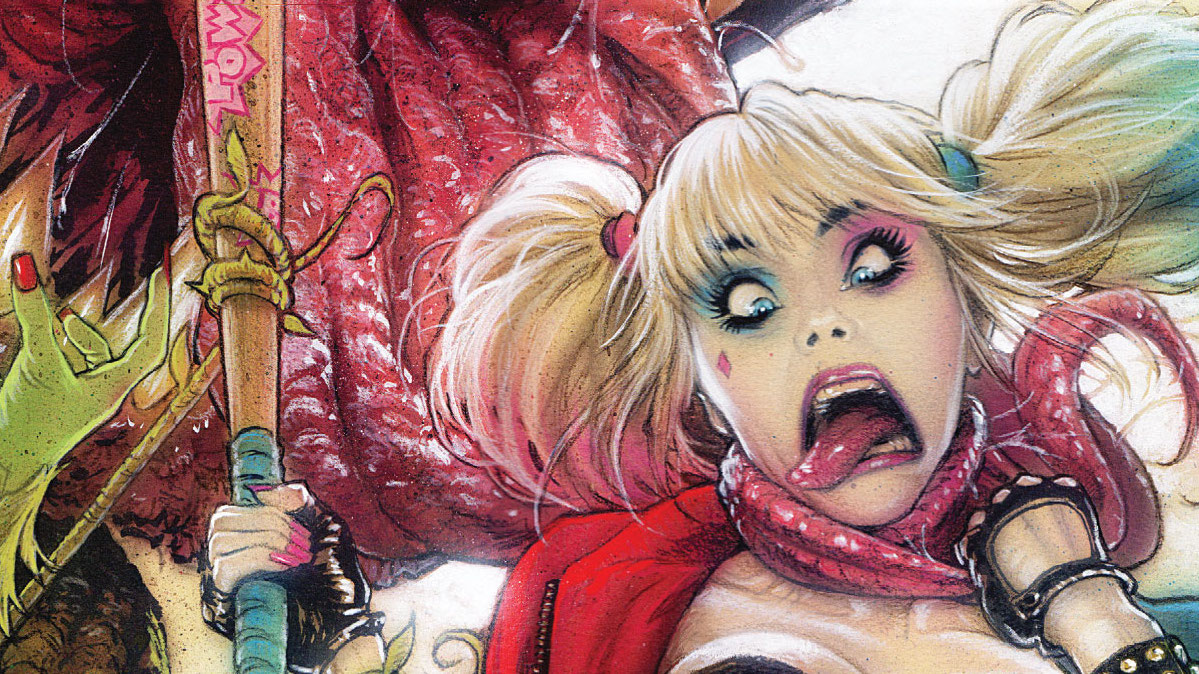 Ray: It’s time for the latest quarterly giant-sized anthology, this one themed to Valentine’s Day. Ten talented creative teams have short stories featuring both couples familiar and unfamiliar. So how does this collection shake up to the last few?

First up is “Perfect Matches” by Gage and Xermanico, focusing on Batman and Catwoman. But it’s not Batman who’s the date of Catwoman to Maxie Zeus’ wedding—it’s Matches Malone. The two are going undercover to bust one of the biggest criminal gatherings in Gotham history, and it quickly turns into a chaotic scene. This is a funny story with a lighter take on Gotham, and uses the diverse mix of Arkham rogues well. It almost has a Batman ‘66 vibe at times, but there are some interesting themes about Bruce and Selina’s failed wedding under the surface.

Next up is “Bittersweet” by Crystal Frasier and Juan Gedeon, a Wonder Woman and Steve Trevor story. The two are on a date when they’re rudely interrupted by a villain called the Blue Snowman. Diana and Steve wound up bound together via blue ice, and this causes a lot of fractures in their relationship to come out of the woodwork. The dialogue here is somewhat odd, and the eventual reveal about the villain’s motivation is a welcome bit of representation but comes out of nowhere. This story has some fun moments, but the tone is all over the place.

“Loose Lips” by Mark Russell and Nik Virella features easily the oddest pairing of the issue—Amanda Waller and Perry White. Of course, this isn’t a standard romance—it’s the two hard-nosed old bureaucrats engaging in a game of cat and mouse while posing as a couple on Valentine’s Day. Lois Lane has gone missing while investigating a coup the Suicide Squad is involved in, and the two constantly draw one card against the other until it builds to an excellent conclusion. Funny, caustic, and quintessentially Mark Russell—one of the best writers at DC.

“A Tale of Two Titans” by Marquis Draper and Pop Mhan focuses on two Teen Titans—Emiko Queen and Wallace West—as they prepare for their first date. Wallace has the help of Avery, while Emiko tries to micromanage things with an assist from Crush. The two don’t actually meet until the end of the story, with a battle against two of the Rogues—on their own mission of love—along the way. The characters are written well here, better than in the title this spins out of usually, but there’s a development with Avery right at the end that I didn’t really connect with. Still, a fun story.

The story everyone is looking forward to most here is probably “The Beginning” by Tim Seeley and Rebekah Isaacs. An epic Harley/Ivy love story, it’s mostly told through splash-page flashbacks as their time together is recapped—sometimes with different perspectives on the same event. But as the story goes on, it starts to move into the future as we see how they eventually became legendary DC heroes—and then we reach the end, as the two elderly women contemplate their future and a potential new start. If anyone still doesn’t ship Harley/Ivy, show them these eight pages—it’s one of the best shorts I’ve read in a while.

Cavan Scott and Jose Luis are the creative team on “Together Forever,” a Hawkman/Hawkwoman story that splits between the present day and their classic adventures in 1940—both of them exploring unfamiliar locations. When they stumble upon an alien spaceship featuring a disturbed extraterrestrial couple, their long-term love story proves the key to eliminating a major threat. It’s a lot of story to pack into a eight pages, but it’s a good follow-up to the recently-ended Hawkman series.

Regine Sawyer and Rob Guillory tackle “Anniversary,” a Mister Miracle/Big Barda story. The two are on vacation to celebrate their anniversary when they come under attack by the Female Furies, who are in search of a new weapon. This leads to an explosive battle and some very personal destruction, with the villains eventually being sent packing and the couple making the best of what they have left. The story has a highly jokey tone, with Guillory’s art being unique and eye-catching, but it’s somewhat thin and a very fast read.

Sina Grace and Karl Mostert take on the other popular Dick Grayson pairing—Nightwing/Starfire—in “Ex-Position.” This takes place shortly after the two break up, when Starfire comes back to Earth and they both get caught up in a fight against a massive space plant. The art is great, and things get chaotic when the creature’s mind-altering spores start bringing out some ugly truths. This isn’t so much a romance as a very awkward reunion, but it’s a compelling spotlight for both characters and a nice throwback to their past dynamic.

Sgt. Rock doesn’t have a romantic partner in the title in “Able,” but Pornsak Pichetshote and Chris Mooneyham have strong throwback to classic war comics. This story focuses on Rock and a famous fellow soldier, Sgt. Samuel Grey, as they escort a female double-agent with intel on the Nazis to safety. While it seems like a standard war thriller at first, a love story does emerge over the course of the story and builds to a tragic conclusion. Pichetshote broke out with his creator-owned thriller Infidel, and this story shows his talent was anything but a fluke.

Finally, John Ridley and Amancay Nahuelpan take the helm for “The Heart Wants,” a story focusing on the complex romance between John Stewart and his longtime enemy Fatality. This is a throwback to the Geoff Johns “War of Light” era, as the Violet Lanterns have kidnapped Fatality to brainwash her. Even though she’s his enemy, John is determined to not let Fatality lose her free will. While there is very little interaction between the two lead characters in this issue, it delivers a hell of an emotional punch at the end.

Overall, a very strong anthology with two tales that could be all-time classics.

1 thought on “Review – DC Love Is a Battlefield #1: Ten Tales of Love”