Ray: With The Lost Carnival: A Dick Grayson Graphic Novel, DC continues its quest to give each member of the Bat-family a standout graphic novel – one that often stands completely apart from Batman. After outings for Cassandra Cain and Oracle, it’s Batman’s original partner’s turn to step into the spotlight.

Veteran comic writer Michael Moreci, an unusual choice for a line that usually favors novelist, handles the writing duties with new-to-comics artist Sas Milledge on pencils. And this story, set amid the later days of Dick Grayson’s career with the Flying Graysons, looks at an era of the character we’ve almost never seen and delivers a fascinating and creepy tale that feels like it would have been perfectly suited for a Halloween release.

Set when Dick was sixteen or so, I’m not exactly sure where it fits into DC continuity if it does at all. In The Oracle Code and Shadow of the Batgirl, we saw a world without Batman, but there’s no confirmation here either way about what does or doesn’t lie in Dick’s future. He’s older here than he would be when he became Robin in almost every continuity not helmed by Joel Schumacher.

But the absence of Batman, Bruce Wayne, and Gotham City has a positive side effect – we get to know John and Mary Grayson in a way we’ve never had the chance before. John is a hardworking, stern but kind man trying to keep his son on the right track in a possibly dying way of life, while Mary provides a listening ear to her rebellious son. It’s great to see both of them coming off as people, rather than sainted dead figures.

The biggest challenge facing Dick and his family is the floundering Haly’s Circus, which is plagued by low attendance and mediocre acts. Besides the Flying Graysons, the closest thing to a star is old-school magician Lodz and his apprentice and niece Willow, who is also Dick’s best friend. This is complicated by the arrival of a mysterious new carnival just outside the perimeter, set up seemingly as direct competition. Haly and the rest of the carnival workers are actively hostile, but Dick can’t help but sneak over and get a look at the mysterious “Lost Carnival” and he discovers a stunning and seemingly supernatural place ruled over by a mysterious magician named Caliban and his beautiful protege, Luciana, who seems to have genuine magical powers.

The script is strong, but the art by Sas Milledge more than carries its weight, especially in a cool little trick using color. Much like other books in this line, it uses a limited color palette, but it switches that palette up frequently.

When in Haly’s humble circus, the colors used are cool, realist blue. But at the Lost Carnival, the art shifts dramatically to cast the whole thing in gold. It helps with the supernatural feel of the place – and makes things all the more dramatic when horrific, demonic beings seem to appear as part of Caliban’s act. What starts as a compelling coming-of-age story combined with a Romeo and Juliet-inspired love story of warring carnivals soon reveals itself to have much higher stakes.

As Dick becomes increasingly obsessed with the Lost Carnival, to the expense of his connection with his fellow workers at Haly’s, the story takes a dark twist that threatens to turn the cold war between the two carnivals to hot. That leads to several shocking reveals, including a dangerous traitor, a quest into dangerous unknown territories, and a tear-jerking conclusion that reveals the tragic secret of the Lost Carnival. The story veers so dramatically into the supernatural that I half expected Zatanna to show up, but I think she’s busy with her own adventures in other DC graphic novels.

One of the most intense and gripping Dick Grayson stories in a while, The Lost Carnival opens up a fascinating chapter for one of DC’s longest-running heroes, and should also hopefully be a breakout for the talented creative team. 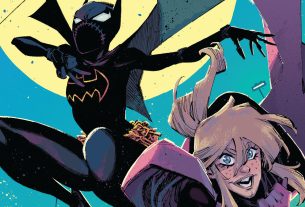 Review – Batgirls #1: The Girls Are Back in Town