Ray: One of the oddest projects to come out of the DC stable in recent months, He-Man and the Masters of the Multiverse from Tim Seeley has nonetheless turned into a compelling take on the alternate versions of the iconic Hanna-Barbera hero.

While He-Man – and his alternate, Anti-He-Man – are on the cover, it’s Skeletor who’s dominating this story. The alternate Skeletor from Anti-He-Man’s world, Prince Keldor, is the key to stopping the evil, but he keeps encountering versions of himself who have fallen to the darkness. The Skeletors in the other worlds are not only evil, they’re stupid and perpetually tempted to give in to dark power. There’s a good segment where Keldor tries to get the Skeletor holding him hostage to make the smart decision and is constantly rebuffed. Maybe this is just cartoon logic, where the bad guy will always make the right decision, but Keldor battling against the futility is compelling.

There are a lot of characters floating around He-Man and the Masters of the Multiverse #3, and the battle can be a little jumbled at time. Of most interest to me is the appearance of a pair of villains, Hordak and Shadow Weaver, who originated in the He-Man cartoon but are now more associated with the brilliant reboot of She-Ra on Netflix, where they’ve become complex adversaries who have their own tragic pasts.

No such complexity here, but the cameos are intriguing. There is a death in this issue as one of the He-Men falls in battle, but the scene tries to fuse the comic and the dramatic in a way that doesn’t quite work. There’s some entertaining absurdity in this comic and that’s its best selling point. The cliffhanger, which has the villain arriving in a very odd world at odds with his style, promises an offbeat fourth issue. It’s not up to par with the Injustice series it spun out of, but it’s a unique look into one of WB’s underused properties and its many permutations. 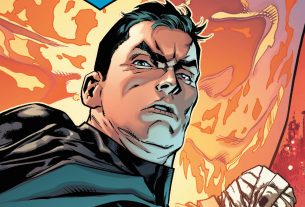 2 thoughts on “Review – He-Man and the Masters of the Multiverse #3: Enter the Horde”