Ray: Tim Seeley is obviously having a massive amount of fun on this comic as he explores the different worlds of Eternia from across the Multiverse. A warrior He-Man, a Chibi He-Man, and a heroic version of Skeletor from a world where He-Man fell to evil are patrolling the dimensions seeking new allies, and their first stop in this issue takes them to a retro sci-fi world where He-Man is a space warrior patrolling in a Flash Gordon-inspired spaceship. The retro evil aliens are a lot of fun, but the best part of this issue is watching Prince Keldor go from reluctant black sheep of his family to a hero in his own right. Seeley’s take on the character is clearly inspired by the comic book version of Loki, maybe a bit too much, but he’s giving him a compelling story arc. Despite the absurd trappings of this series, Seeley manages to infuse it with some real stakes, particularly when it comes to the villain, Anti-He-Man.

I don’t think it’s a coincidence that this comic has its origins in a crossover with Injustice because both of these books take a concept that most writers wouldn’t take seriously—a video game tie-in there, a toy tie-in here—and infuse them with real stakes and real character development. A recurring problem for tie-in comics is that they treat major events with a lack of passion, especially when it comes to multiversal counterparts. By contrast, when an alternate He-Man dies here, we not only see how it affects the team but how it affects his fellow heroes on his world. When a new, darker world is introduced, there’s a sense of dread. This comic is a bit jumbled, like most multiversal team-ups are, and I think it’ll be best appreciated by those very versed in the lore of Eternia. The good news is, even for newbies to this ’80s franchise, it’s full of enough exciting bits and intriguing characters to make it a fun read. 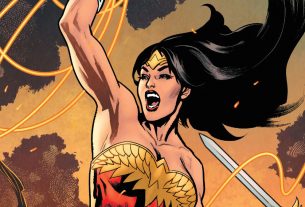 Review – Wonder Woman: Earth One Vol. 3 – The War for Amazonia

2 thoughts on “Review – ‘He-Man and the Masters of the Multiverse’ #2: Eternia in Space”