Ray: As Tom Taylor’s Injustice 2 comes to a close next month (two issues and an annual to go), Injustice 2 #34 starts bringing the sweeping story’s many subplots together. As Brainiac lurks in the atmosphere, getting ready to make a move on Earth, the two factions make some tentative moves towards peace.

Although his trip through the Lazarus Pit left him somewhat addled physically and mentally, Alfred continues to be the heart and soul of the Bat-family as he tries to help Bruce’s imprisoned daughter Athanasia. Although neither she or Bruce are very receptive at first, Alfred keeps pushing to bring the war between Batman and Ra’s to an end. Bruce reluctantly agrees to a meeting, and Harley Quinn heads into enemy territory to communicate the peace offer. Taylor’s Harley, as always, is one of his best-written characters and the scene where she works her way back into Ra’s confidence is excellent. But once the two sides meet, things don’t go nearly as smoothly.

The setting for the peace summit is Atlantis, one of the few territories seen as neutral – but it’s also giving refuge to Jackson Hyde, who was responsible for the attack on Washington.

Aquaman is not willing to bend on President Pierce’s demand that he be extradited, which almost kills the summit right off the bat. Harley and Ivy are able to coax both sides into a one-month cease-fire before they try to solve the bigger issues, but the prospects for peace aren’t looking good. This is about the time that Brainiac starts sending probes into Gorilla City and killing Gorilla, and finds an ally in the equally ruthless Grodd. The issue this series has always had is that it’s bound to being a prequel series for a story that will play out in a video game. That makes me worry about where the ending will go, but for the story it’s telling now, it’s been incredibly entertaining and compelling. 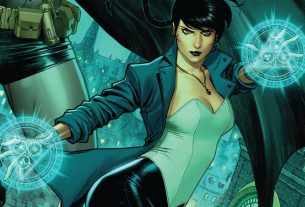