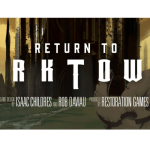 Note: Below you’ll find my original post about Dark Tower (back in 2011). I loved this game. I still LOVE this game. My copy still works amazingly. I cannot tell you how many hours I spent playing this game with friends and solo.

Well… it’s coming back. With eBay prices soaring for the original, those of you who have always wanted to play it won’t have to wait too much longer. Restoration Games has announced it will be bringing the game back to life… and possibly with some upgrades. I will keep you informed as I find more news, and of course, I’ll be reviewing the game once I get my hands on the new one. Now, if you’ll excuse me, I’m going to go pull my original Dark Tower down off the shelf and give it a play. – JFK

As I continue digging down into my box of retro games and activities, I’d like to share with you another great game from my youth—Dark Tower. Dark Tower (Milton Bradley, 1981) was another one of those early electronic board games that included a battery operated device that players would use to play the game. In this case, it was the Dark Tower itself, a spinning monstrosity that sat in the center of the game board. When I say spinning, I mean that—inside is a number of spinning drums that would light up 3 windows that would tell a short story about the current player’s actions. A window might light up a found treasure such as a sword or a Pegasus (useful for an immediate jump to another location on the board) or even a wizard’s curse that can be used against another player to steal 1/4 of his or her gold and warriors. 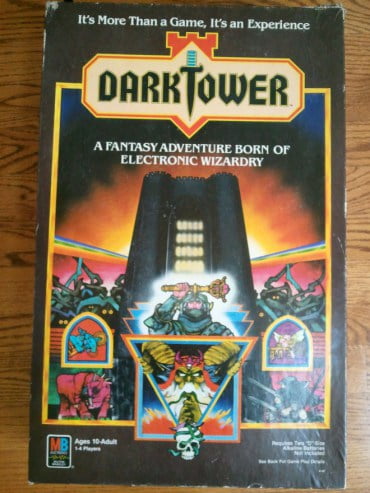 Up to 4 players could play the game, and each player would move a small figurine around the map to locate three hidden keys. Each player starts in his own kingdom but must circle the gameboard, visiting various buildings such as the Tomb, the Bazaar, the Ruins, or the Sanctuary—each of these buildings exists in the other three kingdoms, and players will find one key in each of the foreign kingdoms. After gathering the keys, players can assault the Dark Tower and try to defeat the enemies within and capture the Power Staff of the Empire, a treasure stolen and guarded by a large number of Brigands inside.

As players travel around the game board, they’ll visit the different locations for specific purposes. The Bazaar, for example, is useful for buying food and warriors, but you can also buy beasts (for hauling more gold around), healers for protection from random plagues, and scouts that prevent you from getting lost (another random event). Visiting a Ruin or Tomb is a good place to pick a fight, but you’ll almost always be awarded with gold or treasure… and often with one of the required keys.

The Sanctuary or Citadel (starting point on all four kingdoms) is a good place to get warriors, food, and gold donated to you… depending on what you already have. You keep track of your warriors, gold, food, and other items using a game card and red pegs (just like the ones in the game Battleship). If you take heavy losses during a random battle while wandering a kingdom or after leaving a Tomb or Ruin, you should immediately head to a Sanctuary or Citadel for supplies. 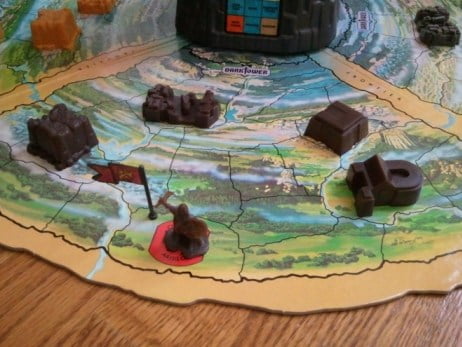 All of the gameplay is done using the electronic Dark Tower and the various buttons on its front. If you move your figurine to the Bazaar, for example, you press the Bazaar button on your turn and hear a little tune played before gaining access to the various items you can buy. (There’s also a Haggle button that you can try to use to get prices lowered, but push it one too many times and the shop will close up and you’ve wasted your turn.) 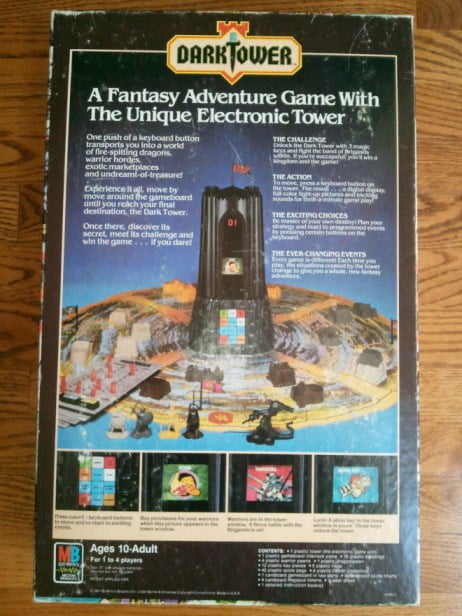 As you wander around the kingdoms picking fights and looking for treasure and keys, you’ll occasionally be attacked by a dragon. If you have found the Dragonsword treasure, you’ll slay it immediately and get a lot of warriors and gold. If you don’t have the sword, you’ll lose 1/4 of your men and gold, but you can then place the Dragon figurine anywhere on the board (other than on a building) and block a player from traveling across that space—it stays there until another player is attacked by the dragon.

All of this happens as you watch the front panel on the Dark Tower—small cartoons are displayed on the screen to indicate fights, dragon attacks, curses, plagues, and more. And after you’ve found all three keys, you’ve still got to make your way to the Dark Tower and determine the proper sequence of using the Brass, Silver, and Gold keys… a bit of logic is needed as you test one of the six different key combinations that will unlock the tower and let you fight the final battle. You (and only you) will get to see exactly how many Brigands are guarding the Power Staff—you may find that you need to retreat and head to the bazaar to buy more warriors… or go pick fights to win more gold to buy more warriors. The game has three different skill levels, and I remember after a while playing nothing but level 3 where the number of Brigands in the tower would be up in the 60 range. 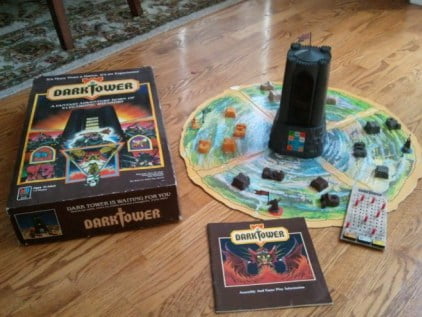 One nice thing about this game, too, was that you could play it solo—you get a rating score at the end of the game, so you were basically playing against yourself to get the highest score. I vaguely remember getting a 40-something score during one solo game, which was an all-time best. (Any GeekDads out there ever get anything higher?)

The pictures here are of my original game—my mom and dad gave it to me for Christmas one year and I played so much that I actually had to replace the bulb inside more than once. The box is beaten up but I’ve got all the parts, including the figurines and the little flags for the Citadels. I put in some batteries and turned it on today—still works!

You can still find the game on eBay but the prices are through the roof! I saw one going for $200 but another up in the $400 range… crazy. I guess if you have one of these stored away somewhere, it’s time to go put some batteries in it and see if it still works, huh?

So, any GeekDads remember this one? Any of you still playing it? My four-year-old is eyeballing it right now, so it’s going to get packed away for a few more years until he’s old enough to understand the rules… and its value!

Want to play? Even if you don’t own the game, you can head over to this Flash version of the game and take it for a spin. It’s even got the original sound effects—creaking door, “Taps” when you lose warriors, and that exotic tune when you enter the Bazaar! Give it a spin—you’ll have a serious flashback (pun intended) when the Duh-duh-duh-DOO-dah, Duh-duh-duh-DOO-dah plays!

Kickstarter Alert: 3D Print Your Own Gaming Figures With MechMaker 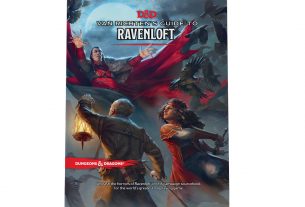 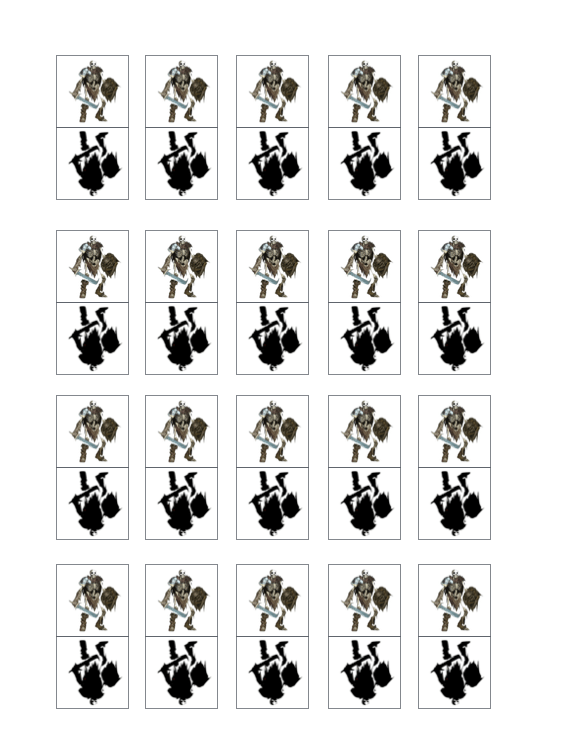 Another Alternative to Inexpensive Minis for Gaming