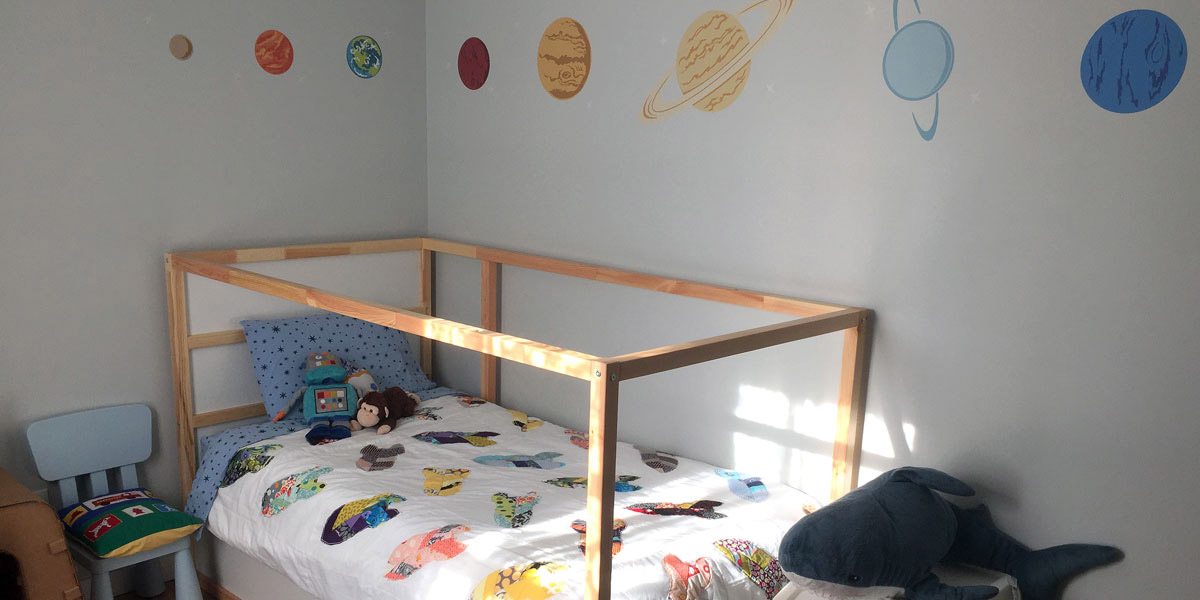 We recently decided that it was time to upgrade my son, Owen, from his nursery to a “big boy room.” When asked what he wanted the theme to be, he unequivocally stated, “Robots and Rocketships” (I expected nothing less from Captain Owen). We let it sit with him for a few weeks while we actually finished the flooring and base paint in his room, but he never changed his mind.

The question of when to upgrade will always vary by child, but there were two main things that were the deciding factors for us–pooping and a potential second child. Recently, my two-year-old decided that he didn’t like wearing poppy diapers (who would), and started using his new-found powers (from potty training) to remove his pants and diapers while full. Because he was stuck in his crib, this resulted in a rather large and disgusting mess we had to clean up several times in just a week.

Thankfully, we were using the Stokke crib which transforms from bassinet to baby crib to toddler bed. We converted the crib to a toddler bed to at least allow him the freedom to get up out of bed and use the potty if necessary. This worked decently as a stop gap measure.

We also have been going through the process of getting ready to adopt our second child, and as we approached the end of the initial paperwork and processing, we knew we wanted him moved to his big boy room in advance of getting our daughter. We did not want him associating his new little sister with being “forced” out of his room.

So with a couple of months until we would be in the adoption pool and potential poopy messes confronting us everyday, we put our big boy room plan into motion.

The most important piece of furniture in the room would be his bed, and we wanted to ensure it would be something that would last him a good long while. After doing a lot of searching, we decided on the Kura Reversible Loft Bed from IKEA. It is a twin-sized bed that can function as normal bed with a canopy top, or, once he’s older, can also be a loft bed. For now, we prefer him lower to the ground (though he’s not fallen out of his bed yet *knock on wood*), and he doesn’t have that much stuff in his room right now (we want to limit distractions from nap and bedtime). As he gets older, though, we’ll transform the bed into a loft to increase floor space and change-up opportunities for play.

And because sleeping is the thing he does the most in his room, we wanted to ensure he had a very nice mattress that would also last a long time. We also wanted something that wasn’t full of chemicals. I remembered hearing about Casper mattresses on the Nerdist Podcast, so I reached out to them, and they were gracious enough to not only send us a twin mattress to review for this write-up but to also give us a special GeekDad.com coupon code for $50 off any purchase (GeekDad50)!

Casper mattresses are made with three layers of foam–latex, polyurethane, and visco elastic memory foam. The mattresses construction promises to be cooling, has low VOC emissions (a big plus for us), and the polyurethane is Certi-Pur certified (that means it’s free from ozone depleters, PBDE flame retardants, formaldehyde, phthalates, mercury, lead, and other heavy metals). It also features a removable, washable cover. That was also a big must for us since we were getting it for a not 100% potty trained toddler.

My son (and my wife) both run extremely hot. In the past, when I’ve held him while he slept, I would always wake up drenched in sweat. Gross, I know. I have, I will admit, fallen asleep in his new bed with him (it’s just so damn comfortable) and have not ever had the experience of being covered in sweat like I expected to be. I can safely say at this point that I am a true believer in Casper’s claims about the mattresses ability to create airflow and prevent overheating. I have even laid down on his bed several times alone (after making it or just when cleaning his room) because the mattress is so much more comfortable than ours. I’ve never been more jealous of any of my son’s possessions as I am of his Casper mattress (though his Star Wars toy collection is starting to rival any I ever had). 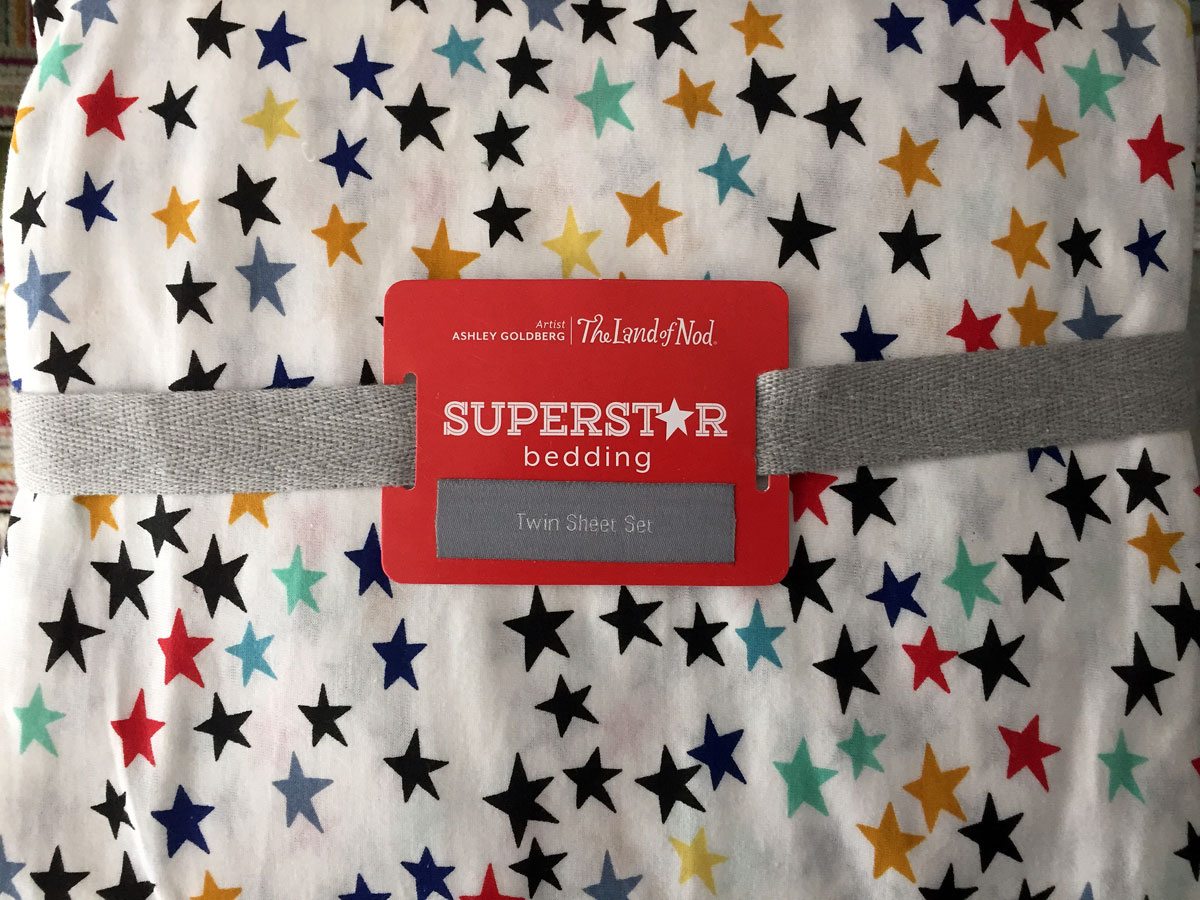 To finish off his bed, we got a couple of sheet sets from the Land of Nod–Superstar Jersey Sheets and Star Sheets–to tie into the space theme. While both sets of sheets are soft and comfortable, I just love the feel of jersey sheets–one more reason it’s so hard to not lay down on his bed and take a nap. We also got him an Ultra Luxe Bamboo Mattress Cover (it’s waterproof, anti-bacterial, hypoallergenic, and contains no pvc, vinyl, or phthalates) and a Sleeper Space Bamboo Memory Foam Pillow (also anti-bacterial and hypoallergenic with a removable, washable cover).

The final piece for the bed was my wife’s most ambitious quilting effort to date. She created a quilted duvet cover full of mixed fabric rocketships. She literally made her own squares of fabric from scraps of fabric she has collected over the years, cut them into rocketships, and then quilted those together! It was quite the effort and quite worth it when all done. We stuffed a Grusblad comforter from IKEA into it to complete it.

Next on the list was a closet to store and organize his clothes and extra toys. We opted for the Algot storage system from IKEA. I’ve used it in several closets before and it’s extremely easy to put up while also being very configurable. Because we wanted something that would last through the years, we wanted a modular system we could tweak as needs changed. We decided to do just one hanging bar (a two-year-old doesn’t have a lot of hanging clothes), five shelves, and six basket drawers to make getting clothes in and out easy for him. The Algot system has a top bar which mounts to your wall and then vertical supports that attach to it. It only took me about 45 minutes start to finish to put everything up.

When I read the Cardboard Guys review back in March, I immediately backed the campaign as I knew the desk and chair would be perfect for our upcoming room upgrade. I’m very happy to say that the quality and sturdiness of the chair and desk blew away my expectations. I never thought a little cardboard chair would be able to reliably hold my weight, but I’ve used the chair multiple times without issue. One word of caution–don’t let an un-diapered, un-potty trained toddler sit on the chair. It is cardboard and getting it wet doesn’t work out too well (though isn’t disastrous). 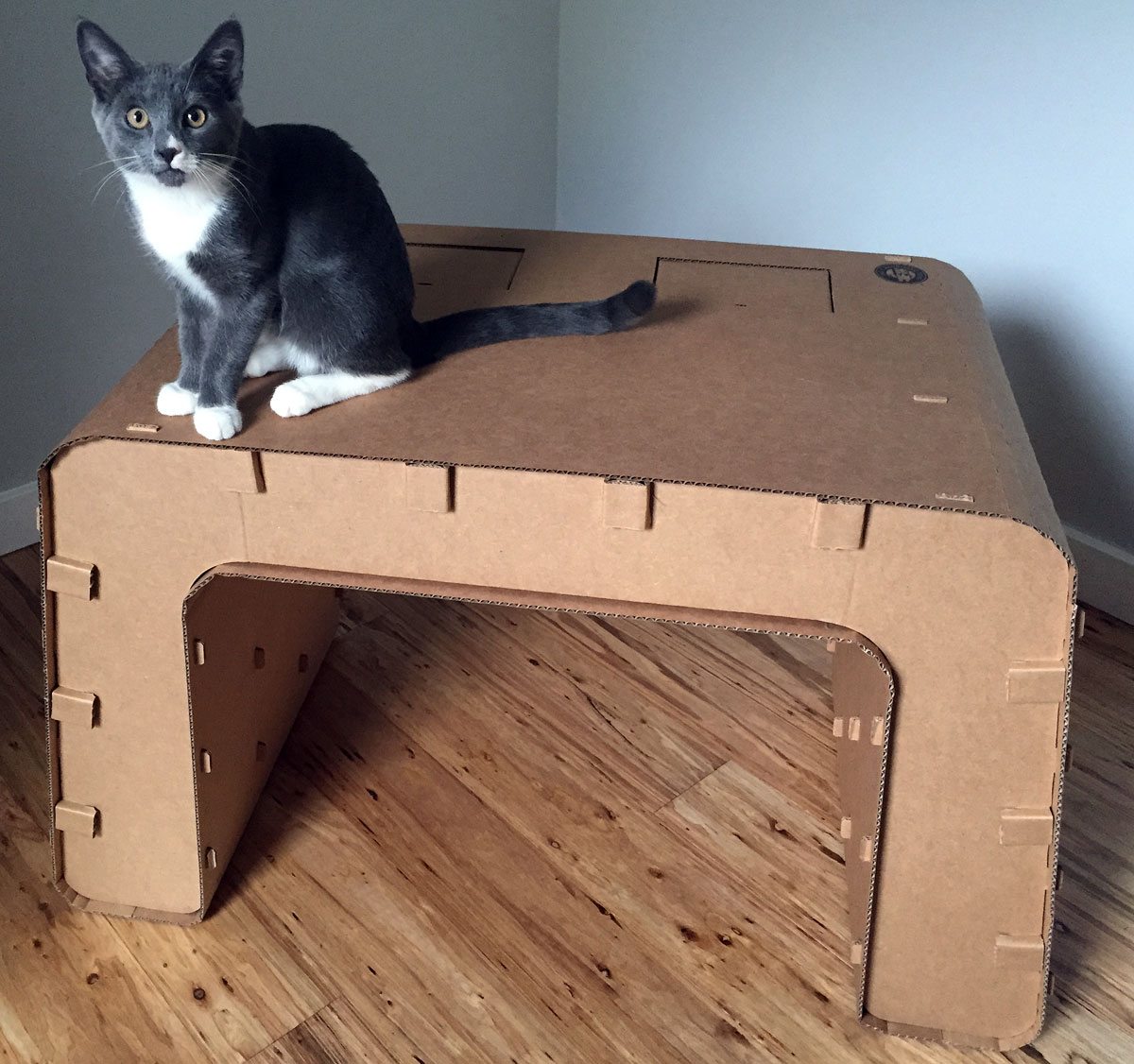 I haven’t put the desk to a weight limit test, but it is also very sturdy and performs its job of keeping things off the floor well. Our cat Nori approves! The furniture set included some paints and markers to allow customization of the desktop which Owen had a blast doing. You can see the final desk down below. If you want cheap, stable, easily customizable furniture for your kids, check out the Cardboard Guys!

We knew we wanted some sort of space-themed art on the walls, but decided against painting something specific. We decided to go with wall decals so we could easily remove them and put something else up when it came time to do so. I did a little research on wall decals and came across Wallums. They had a great variety of decals and were highly recommended so we reached out and were sent three decal sets to try out–a set of nine planets, a John Lennon quote, and a chalkboard robot.

If you’ve ever done vinyl wall decals, they all work pretty much the same way–peel the front off, align the decal on the wall, rub on it to adhere it to the wall, and peel the backing off. All of the decals applied very nicely and easily and are very high quality prints. I’d never seen a chalkboard wall decal, but the robot looked too cool to pass up, and, so far, it’s held up really well without any ghosting. My wife and I also debated about whether or not to put Pluto up (I was pro-Pluto). We finally compromised by putting Pluto behind the door. As a total added bonus, my son can now recite all of the planets by heart.

Here are a couple of final shots with all the random stuff thrown in. The little blue chair, green plastic potty, and white storage bins (along with Sharkie) all came from IKEA.

This is the closet full of Owen’s clothes, diapers, and wipes. The bottom right drawer is his hamper. Having easy access to all of his clothes has inspired a new found passion in Owen for helping me put away his clean clothes. He also loves putting his diapers into his Diaper Genie himself now. Thankfully, he’s not tried to pull them back out and play with them. Having access to his wipes has also allowed him to try wiping his own butt–that hasn’t been quite as successful. Gross, again. You can also see a small fraction of his book collection and the Samsung Smart Cam HD Pro Wi-Fi Camera I recently reviewed.

Here is the completed desk. You can also see the DIY R2-D2 garbage can I made, along with the super cute Bedtime Buddy Nightlight from Land of Nod, a Monster ABC Sticker, and the Steel Blue Robots Lil’ Mo Whimsey Hand Made Area Rug from Momeni Rugs. This is a beautiful, hand-crafted rug that we were able to get at wholesale. Owen loves it and has frequently made up stories for the robots and rockets on the rug. It’s nice and thick and cozy–so much so that he’s even asked to take his nap on the rug a few times.

The final verdict? Two thumbs up! Owen loves his new big boy room, and we’ve built in plenty of room to grow for years to come.

4 thoughts on “Moving on Up: From Nursery to Big Boy Room”