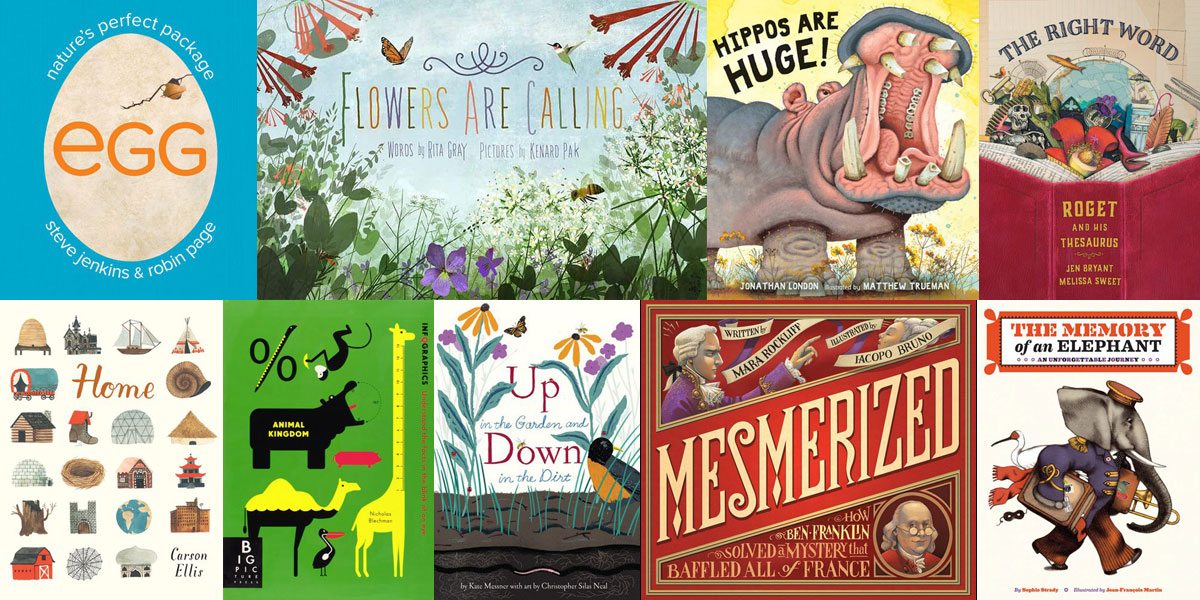 I know, it’s only the middle of the week, but our stacks are really overflowing, so it’s time for another stack of non-fiction(ish) books for kids! Not all of these are strictly non-fiction, but all of them include some educational elements.

I’ve been getting a lot of these lately–they’re a picture-book format, but often extend beyond the typical 32-page limit, and tend to have more text. I’m not always entirely sure what the target age is; my toddler gets impatient when I’m not turning pages fast enough, but older kids may assume that they’re too old for these books simply because of the appearance. My older kids (8 and 11) are happy reading them at home, at least, but I’m not sure they’re the sort of things they would check out at the public library. 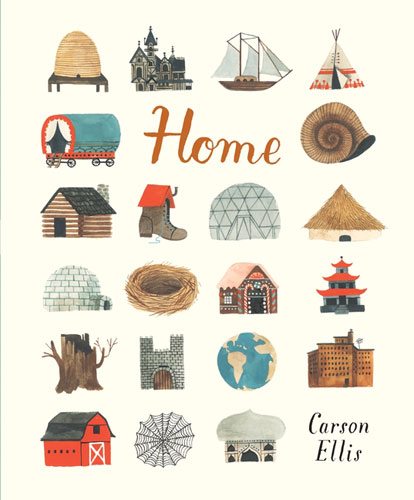 The books in this list are a mix: some are text-heavy, and some are much closer to the traditional picture book format. This one is the latter. Ellis has illustrated a number of books before, including the Wildwood series (written by her husband Colin Meloy). Home pictures many different types of homes: Tall homes and short homes, palaces and underground lairs, real and imaginary. The illustrations are wonderful, and there are fun little details, like a little bird that appears somewhere in every picture. 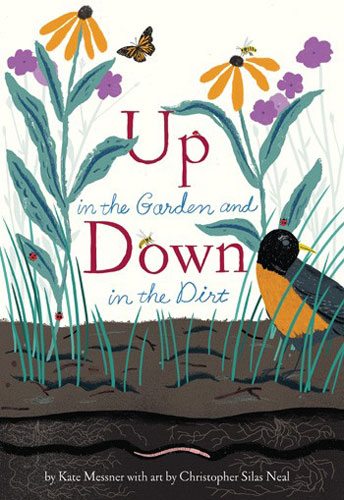 Up in the Garden and Down in the Dirt by Kate Messner, illustrated by Christopher Silas Neal

In this book, a young girl plants a garden with her grandmother. It starts in the wintertime, when the garden is nothing more than an idea. And as the seasons change, we get to see what’s happening down under the dirt and up above in the garden, as people and plants and bugs and animals interact and grow. The book goes through an entire year, ending in the wintertime when the beginnings of next year’s garden are sleeping down below. The book ends with a section about all of the animals seen throughout the book, from earthworms to garter snakes to spiders. 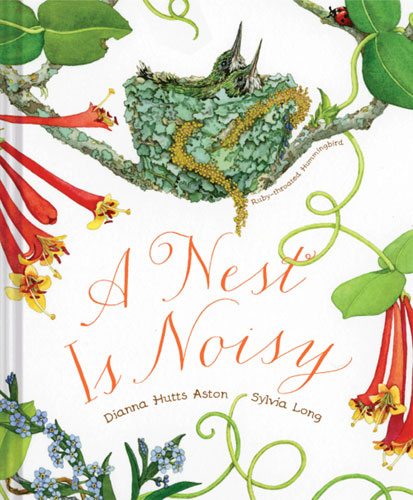 A Nest Is Noisy by Dianna Hutts Aston, illustrated by Sylvia Long

When you first see the cover of this book, you might think it’s going to be about different types of bird nests. But it’s actually about all kinds of nests: birds, yes, but also hornets and platypus and alligators and even orangutans. Each spread has a simple line: “A nest is …” and then an example of a nest that is muddy, or hot, or neighborly, or tiny. The book is filled with beautiful, detailed watercolors, accompanied by text that gives some facts about the nests. My toddler didn’t have the patience for the longer sections of text, but she liked the pictures and the simple phrases. As she gets older, I can read the rest to her, too. 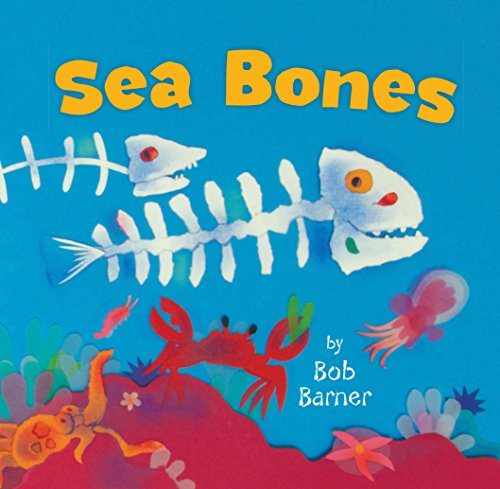 Sea Bones is somewhat similar to A Nest Is Noisy in that it has some larger text that you can read aloud to younger kids, and then smaller text with more details that older kids will enjoy. It’s all about creatures in the sea–the title maybe somewhat misleading because it’s about animals with and without bones. The brightly-colored paper illustrations and rhyming text will appeal to a younger audience. 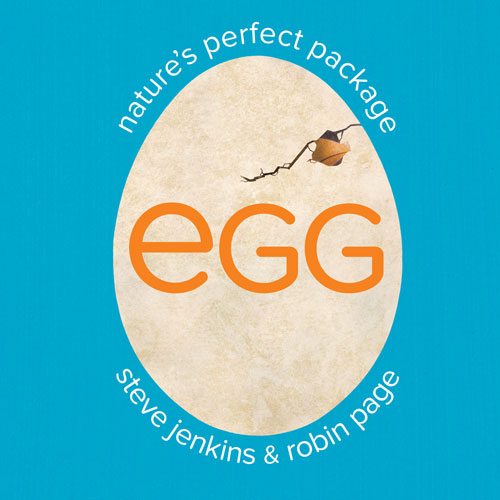 Steve Jenkins and Robin Page are back with another book featuring Jenkins’ amazing cut-paper art. Egg is straight non-fiction without an accompanying story, but it’s filled with fascinating images and information about all kinds of eggs: how big they are, where they are laid, how many are laid at a time, and so on. At the back there are some more facts about every creature seen in the book. This one’s one of my favorites on this list. 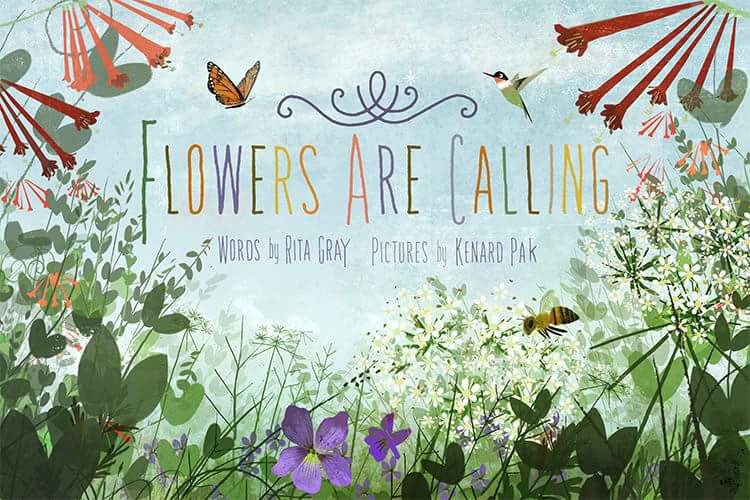 Flowers Are Calling by Rita Gray, illustrated by Kenard Pak

In Flowers Are Calling, different flowers call to various creatures (mostly insects). The book is set up with a few pages of silly rhymes followed by a two-page spread with some close-ups of the flowers and facts about them. The illustrations are lovely, sort of a stylized realistic look, and I liked the flower facts, but the rhymes were a little odd to me, and didn’t always flow well. At the back of the book are a few pages about flowers in general, and what you can learn from their color, pattern, shape, smell, and even time of blooming. 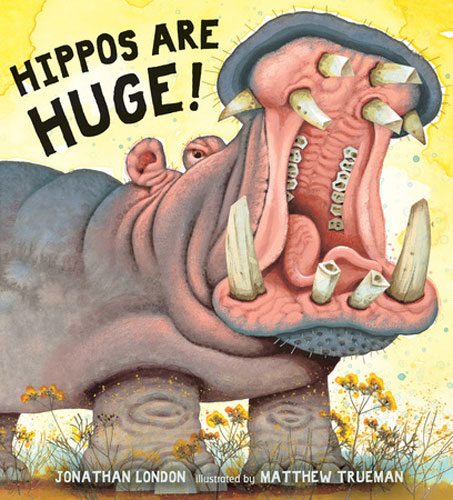 Hippos Are Huge! by Jonathan London, illustrated by Matthew Trueman

Here’s a kid who thinks hippos are just cute and cuddly: Hippos Are Huge! They have razor-sharp tusks, enormous mouths, and they’re faster than you think–and this book will tell you all about them. I mean, yeah, they’re still cute, but a six-month-old hippo can weigh 500 pounds. I was especially impressed with the illustration of a hippo about to bite a crocodile in half. This book has a good deal of text–some large and bolded, and then smaller text that gives a few more details. It’s fun to see this wilder side of hippos, since they’re so often portrayed in picture books as slow, fat, and harmless. 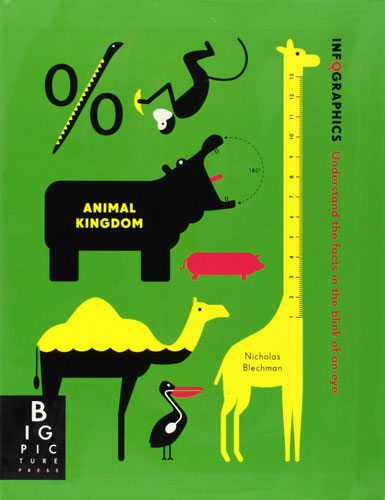 If you want to know more about more animals, Information Graphics: Animal Kingdom has you covered. It’s filled with all sorts of different facts, like how many teeth various animals have (dolphins: 252!) or how much animals eat compared to their body size (duck: 20%). The facts are presented with fun infographics. My only complaint is that the infographics, while fun, aren’t always accurate graphs. For instance, on the page about brain sizes, you would think the size of the brain illustration would correspond to the actual size of the brain–but looking at the actual numbers shows that it isn’t so. Still, for kids who love animals and facts, it’s a fun book to peruse. 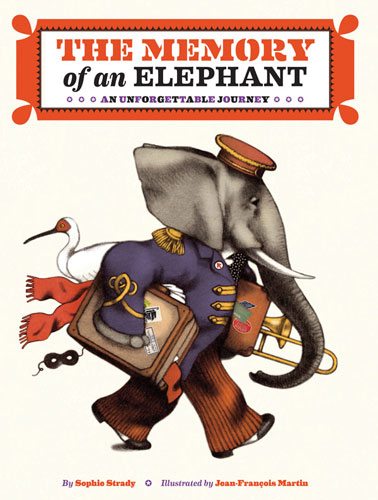 The Memory of an Elephant: An Unforgettable Journey by Sophie Strady, illustrade by Jean-François Martin

Here’s an elephant-sized book about a French elephant celebrating his birthday. The Memory of an Elephant is an oversized picture book that tells a story about Marcel, an old elephant. As he goes about his day, we get lots of facts about all sorts of things: different types of food (breakfast), fashion (Marcel gets dressed), instruments (Marcel used to play in a band), and more. There are, of course, a lot of elephant facts, too, sometimes with funny bits like: “If an elephant is left-handed, like Paul McCartney, then the left tusk is more worn than the right tusk.” It’s a very fun book to pore over, with pages that look like old advertisements filled with images and text. 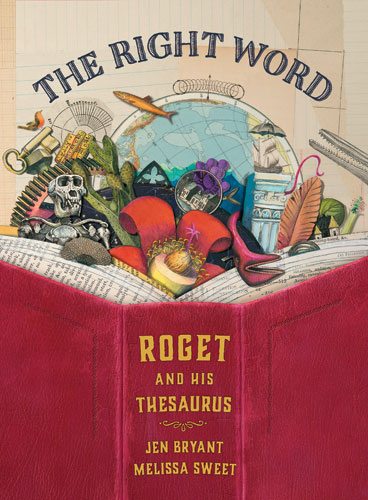 The Right Word: Roget and His Thesaurus by Jen Bryant, illustrated by Melissa Sweet

The Right Word is a great picture book for word nerds: it’s about Peter Mark Roget, the creator of the thesaurus. I’d heard about it because it won a Caldecott Honor this year, so I picked up a copy at the bookstore. I love the illustrations, which are filled with words and labels, and I enjoyed learning more about the man behind the name. It starts with Peter as a boy, making lists of words, and follows him through medical school, giving lectures at science society meetings, and finally publishing his thesaurus. I highly recommend it–it’s all about the power of words, and is great for both young and old readers. 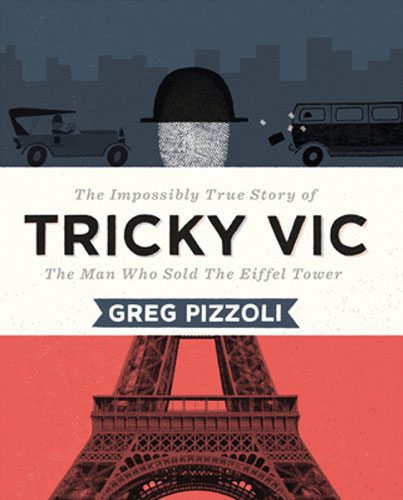 The Impossibly True Story of Tricky Vic, the Man Who Sold the Eiffel Tower by Greg Pizzoli

Count Victor Lustig (real name Robert Miller) was a master con artist, but his most famous trick was selling the Eiffel Tower. In Tricky Vic, Greg Pizzoli tells the story of this sneaky guy and some of his tricks. Because of the content and the amount of text, this one’s recommended for ages 7 and up despite its picture book format. There are sidebars explaining things like Prohibition and counterfeiting, though the story itself is told in a pretty straightforward fashion that isn’t difficult to follow. Pizzoli admits in the Author’s Note that he did take some artistic license with the order of events–and also because hard facts were difficult to come by in the life of this con man–but it’s still a really fascinating book, and the illustrations are fun. 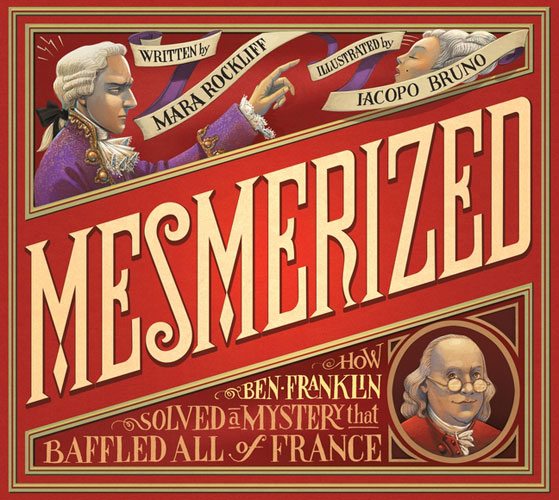 Mesmerized: How Ben Franklin Solved a Mystery That Baffled All of France by Mara Rockliff, illustrated by Iacopo Bruno

The word “mesmerized” comes from Franz Mesmer, a French doctor who was able to cure his patients using an invisible force he came to call “animal magnetism.” King Louis XVI was curious, but wanted to know if it were true. Ben Franklin to the rescue! This picture book tells a simplified version of Franklin’s investigations. Even though it’s a picture book format and isn’t too text-heavy for younger readers, it includes an explanation of the scientific method, describes how blind testing is still used for medicines today, and even mentions the placebo effect. The illustrations are captivating and the story teaches a lesson about scientific evidence that I’m sure any geek parent would approve of. (There is a section in the back that gives more details, since the picture book portion leaves a lot of that out.) My toddler was particularly mesmerized by the endpapers, which have a swirly optical illusion printed on them. 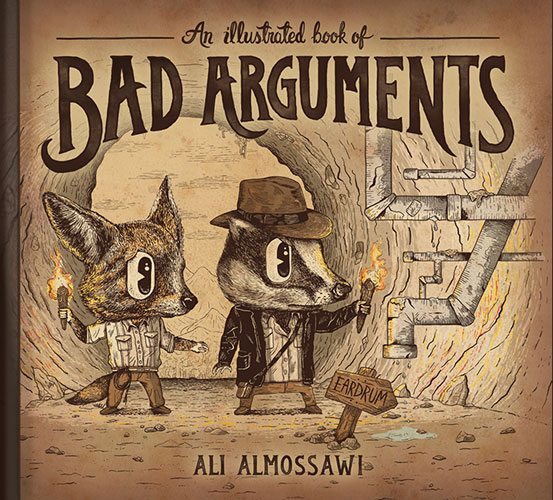 An Illustrated Book of Bad Arguments by Ali Almossawi, illustrated by Alejandro Giraldo

Speaking of the importance of evidence, An Illustrated Book of Bad Arguments should be required reading for every geek kid, as well as anyone who votes. Jenny Bristol reviewed this a couple years ago, but it was since picked up by The Experiment and was republished last fall. It’s basically a list of logical fallacies, from straw men to generalizations to the “no true Scotsman” argument. Each one is given a brief explanation paired with a cartoon illustrating some animal making that mistake.

Disclosure: Except as noted, I received review copies or proofs of the books in this article.

A Feast for the Eyes: Introducing Lonely Planet Food