If you’re familiar with manga at all, you’ve heard of Osamu Tezuka: the so-called “god of comics” or “father of manga.” He’s best known as the creator of Astro Boy, Black Jack, Kimba the White Lion, and Buddha. Taken together, though, his complete works would span more than 150,000 pages.

Much of his work is either out of print in the West or has never been translated into English.

Enter Digital Manga, who have apparently taken up the task of releasing many of these hard-to-find gems. They’ve successfully used Kickstarter in the past to fund editions of Tezuka’s Swallowing The Earth, Barbara, Triton of the Sea, Unico, Atomcat, Captain Ken, and Ludwig B. (All except Captain Ken and Ludwig B. saw well over 200% funding!)

They’ve once again taken to Kickstarter to publish two volumes of Alabaster. It’ll consist of two high-quality paperback books, which they’re listing as 280 and 232 pages, respectively.

If their previous books are an indication of the quality we can continue to see in their Tezuka titles, then I think this is a safe investment (i.e., they look very nice).

Alabaster is a title with which I wasn’t familiar, but Digital Manga describes it like this:

Written in a dark period of Tezuka’s life, Alabaster is a thriller suspense revenge story that touches on the dark side of humanity and the extent one would go to get even. It shows that not only does it affect the victims, but how destructive it is to be surrounded by such animosity. Recommended for older teens and up.

There are lots of rewards levels and random goodies, such as a signed thank you card, bookmarks, posters, coins, and a grab bag of other Tezuka-themed items.

The levels you should care about are:

There’s also a stretch goal ($10,000 above their funding goal for Alabaster) to reprint Tezuka’s 514-page Swallowing the Earth. Considering I missed this one during its initial printing, I’d really like to see this happen.

If you’re at all interested in this, I highly suggest you jump on now. Many of their previous Kickstarter titles are now sold out and selling for exorbitant prices online. Don’t miss out! 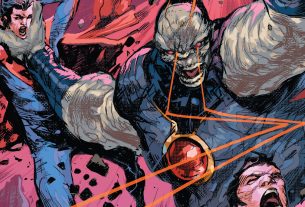 Review – DCeased: War of the Undead Gods #4 – Beware the Guardians