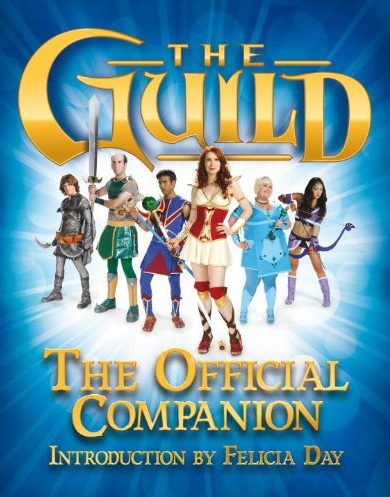 I have a confession to make: I’m really not into MMOs. I’ve played World of Warcraft, City of Heroes, and even The Matrix, but these kinds of games have never managed to hold my interest for long — level 17 for WoW, 21 for CoH, and only 11 for Matrix. But even though MMOs aren’t for me, I do have one MMO-related addiction. And I’ve had it for over 5 years. It’s The Guild.

If you’re not famliiar with The Guild, it’s a video web-series created by Felicia Day that focuses on the relationship between six players of… “The Game.” These six players are members of The Knights of Good, a guild that games together using webcams and microphones. Season 1 introduces the six main characters that include Felicia Day’s Codex (AKA Cyd Sherman), Jeff Lewis’s Vork (Herman Holden), Amy Okuda’s Tinkerbella (April Lou), Vince Caso’s Bladezz (Simon Kemplar), Robin Thorsen’s Clara (Clara Beane), and Sandeep Parikh’s Zaboo (Sujan Balakrishnan Goldberg). These are six dysfunctional individuals who finally meet IRL (in real life). Over the last six seasons, they’ve gotten closer, made discoveries about one another (real names, unusual habits, embarrassing photographs… the list goes on), and faced some unusual challenges as a group.

We fans of The Guild all have our favorite characters and, given the episodic nature of the show, we also have our favorite seasons and scenes. For me, I can’t decide whether it’s Season 3’s rivalry with the members of competing guild Axis of Anarchy (with Wil Wheaton playing the role of guild leader) or Season 5’s focus on the group attending a gaming convention.  When it comes to scenes, the list just keeps growing — Zaboo and The Master Chiefs working over Kevin Sorbo for front row tickets to a panel, the Cheesybeard video, Bladezz sister (“Use the stencil!”), Clara’s young kids playing with kitchen tools and utensils while she’s online, Nathan Fillion throwing a little fit after being denied some social media tutoring by Vork and Bladezz, Zaboo going all Godfather on Neil Gaiman.

It’s a hilarious cast with some great geek in-jokes and a lot of poking fun at ourselves. If you haven’t watched it, you’ve got six existing seasons to catch up on. And if you are a fan and have watched them and become attached to any or all of the characters, you’re going to love The Guild:The Official Companion book from Titan Books. It’s 160 pages of full-color photos from the show as well as behind-the-scenes stuff. Interviews with all the actors as well as Producer Kim Evey and Director Sean Becker provide a ton of great trivia about the show’s beginnings, the casting, and the day-to-day activities that go into creating this kind of entertainment. It’s great to read background on the actors and learn how they found their way into this series as well as some of the other projects they are involved in.

As for fan extras? Well, there’s a suitable-for-printing full page Axis of Anarchy logo (if you’re willing to rip it from the book). Anyone who’s been looking for a copy of the infamous “Highland Sextasy” painting will find a matching full-page copy. Lyrics to the three music videos. Notes and images related to costume design. Plenty of notes on the various props, awards, cons, comics, and even the opening credits.

The Guild: The Official Companion opens with a special Introduction from Felicia Day and ends with an Endgame discussion by actors, producer, and director that speak to the popularity of the show and where it may go next. And crammed between Intro and Endgame are so many great interviews, notes, sidebars, photos, and stories… enough to now make me want to go back and re-watch all the episodes because of all the secrets I now know about the show. There’s just so much great fan information packed into the book that I cannot imagine any fan of The Guild not grabbing a copy.

Note: I’d like to thank Tom at Titan Books for getting me an advanced review copy.

When Left To Their Own Devices…

Nintendo Products to Consider for the Holidays