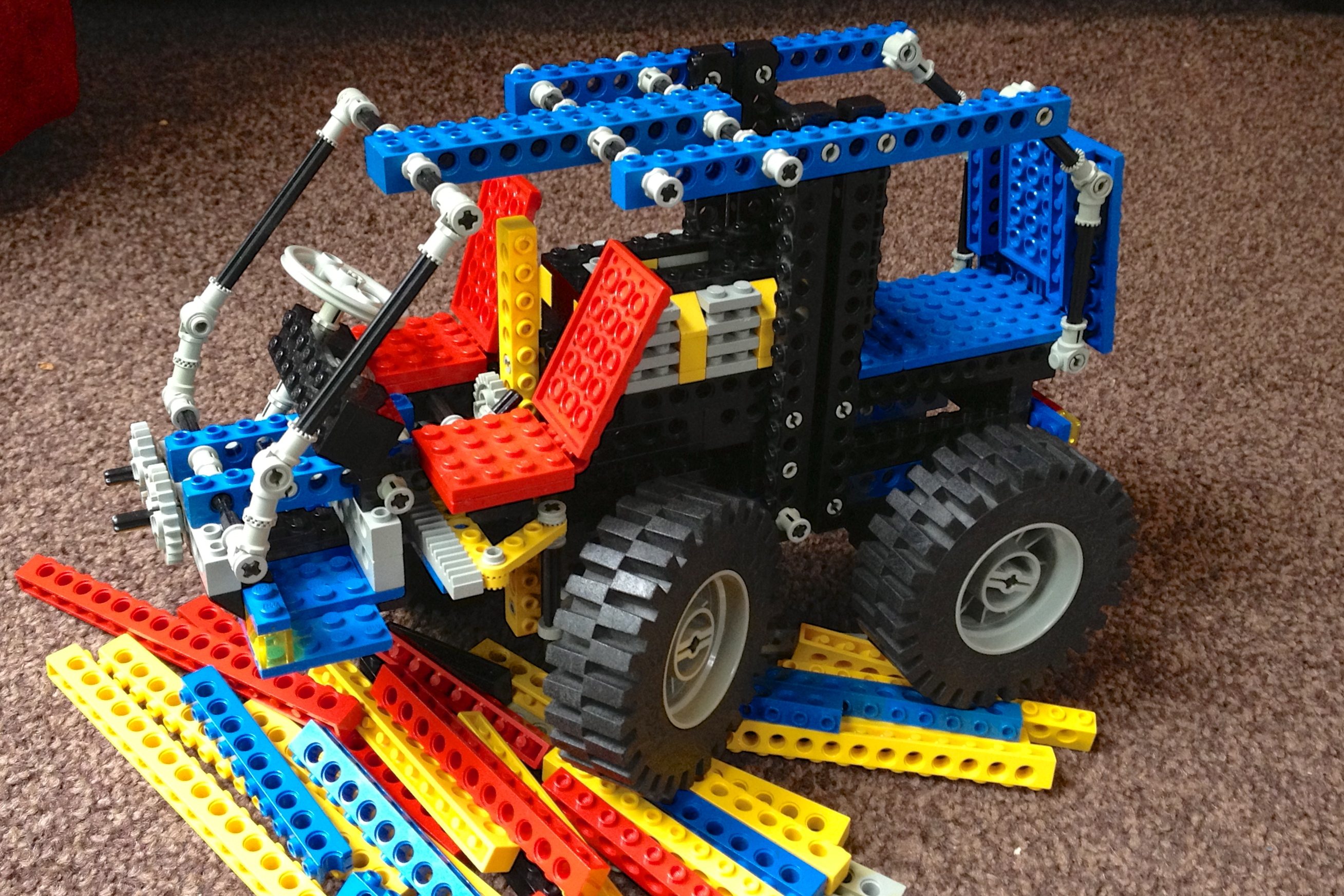 It’s the half-term break over here in the UK this week and that means finding fun things to do with the kiddo, and what could be more fun than going to visit Grandad and her cousins? I’ll tell you what, being rained in and discovering her Dad’s old Lego stored away in a wardrobe in Grandad’s spare room – and I don’t mean for her this time!

When I was around 12, I was a huge Lego freak I had tons of the stuff. I hoarded the catalogues, filed my instruction booklets away neatly and organised my bricks in an old toolbox of my Dad’s – the kind with all the little compartments meant for screws and nails. I had recently made the leap to (then) new Technic range and quickly amassed several of the sets, including the second biggest – #8859, a big blue tractor. I remember being insanely jealous of a friend who had the biggest one – #8860, the car chassis – but at least he let me photocopy the instructions and I had enough bricks from my combined sets to build it!

When the kids pulled out the crates, I felt like I was 12 again and that it was Christmas morning. I poured through the catalogues from 1984 and 1985, mentally saying ‘got’ or ‘want’ for each set as I turned the pages. By this point the kids had already started building – strange multi-coloured cars using wheels that still had a metal axles, or houses with yellowing-transparent bricks for windows. The pumps from the original Pneumatic range had now become petrol pumps in a crazy garage which also had cranes and winches to lift the cars up for repair. We found a few original Space series minifigs, with their simple smile and two dots for eyes. There were some of the really old figures that didn’t have moveable arms or legs or even faces at all, and strange giant figures with fully poseable arms, but legs you just made from regular bricks.

Occasionally my nephew would show me a piece that wouldn’t attach correctly because it had been chewed and I had to inform him that this wasn’t due to a dog or other pet, but was in fact his Mum’s fault. My sister had a terrible habit of chewing my Lego when we were younger – so much so that she had ruined so many bricks that I couldn’t build some of my sets anymore. My Mum made her buy me a basics box out of her pocket money to teach her a lesson! There we so many snapped-in-half baseplates, their ends covered in superglue or carefully carved back to straight edge with a craft knife. None of the bricks still had their crisp sharp edges and I reckon all of them were way past their 37,112 clicks, but none of that mattered.

By now, I had moved on to trying to put my old instruction manuals back together in the right order – my efforts to keep them tidy obviously didn’t work. Pages were lying loose in the box, the sellotape that once held them together dried out, yellow and brittle. There didn’t seem to be any missing, bar the cover of one of the catalogues, and the pictures of the models brought memories flooding back. The blue Go-Kart with its one-cylinder engine, the red Jeep with its springy suspension, the helicopter with its hand-cranked blades. The manuals for larger sets included some brief instructions for extra models you could build – if you had enough bricks – and it was one these that me and a friend had the most fun with. It was a simple car with working steering and a single seat. We used to build one each, customise them, and then hurl them into each other to see whose would survive the longest. It was obvious what was going to happen next…

I chose the biggest set I had, the blue tractor – but I’d always preferred the secondary model which was a big, chunky off-road truck-type vehicle. Turning to just past the halfway mark in the instructions I was surprised to see that the steps didn’t include the small parts list panel that is so familiar to us these days. They were there for the main model, just not the secondary one, so I had to be carefully inspect the images so as not to miss any important bits. As I progressed through the pages I remembered how it was through Lego, and these sets in particular, that I had my first experiences of certain engineering concepts such as rack-and-pinion steering, differential gears and pistons – even if it was the wheels powering the engine in this case and not the other way around! As I finished the engine block (with excellent brick-searching assistance from my nephews) I remembered the thing I didn’t like about this model – the ‘transmission’ cogs and rods had too much friction to actually allow the wheels to turn and they would just skid across the carpet instead of pumping the two-cylinder engine up and down. Maybe I could get it working this time…

Every now and then I would remember a little tweak I used to make when building the model. Being the secondary set, the off-roader had to use the parts from the tractor as efficiently as possible and this occasionally meant having to use a yellow beam where a black or blue one would look nicer. I switched them where I could, confident that there would be enough bricks from the other sets, occasionally having to go back a few steps and extract one when there wasn’t or substituting elements for others that had broken or couldn’t be found. It took about an hour and half to put the whole model together, but would have been much longer if my Dad hadn’t kept the old bricks organised in ice cream containers. I knew he kept the Lego around for when he was babysitting my sister’s children, but what I hadn’t realised until today was that he also built many of the models as something to keep himself occupied after my Mum died.

After a break for lunch, we all came back to the crates and I embarked on the really fun bit – taking the stock model and customising it to make it my own. By this point we were getting low on regular bricks thanks to the ever-expanding garage/crane/loading bay situation, but I found enough to give the off-roader a decent cargo area, a nicer front end and a proper roof with that all-important huge spoiler! I even managed to turn the funny big figure into the driver and put the spaceman in as a passenger.

Now it was play time and everyone wanted a go, even my old Dad. I lost count of the amount of times I had to fix the steering because the pieces had worn out so much that they were no longer tight enough to stay in place, and I still couldn’t get the engine to run smoothly. The giant truck visited the garage many times for other ‘repairs’ too, although most of the repairs had to made to garage because the truck was just too big and kept knocking the pumps over.

I doubt it’ll still be assembled the next time I visit my Dad, but that just means we’ll have to build one of the other ones…

Puzzle of the Week: The Balloons Know 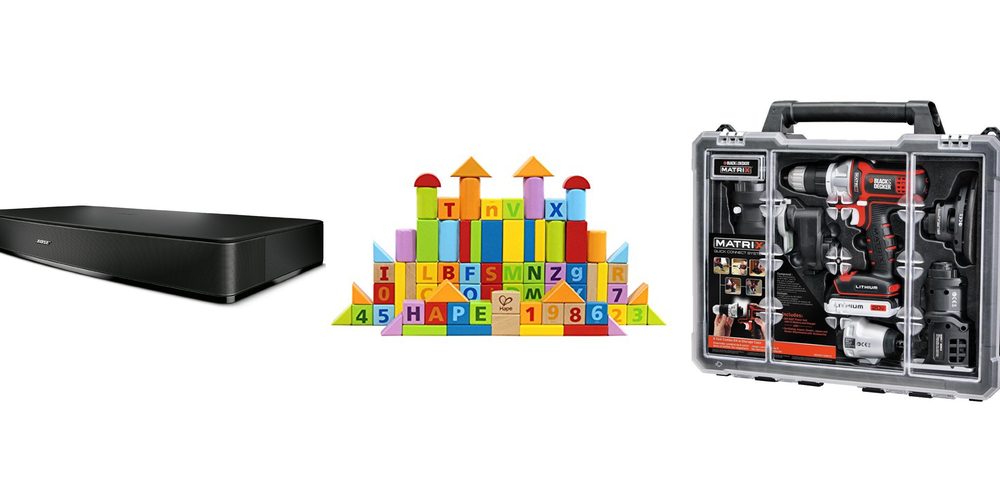