Overview: The United States is a wasteland, devastated by war. Pockets of survivors are struggling for supremacy, negotiating with settlements or simply conquering them for spoils. The goal is to rise again above the other factions, forming the 51st State. 51st State is a card game from Portal Publishing, published in the U.S. by Toy Vault.

Rating: Post-apocalyptic dystopia for gamers! Fun but quite complicated.

Who Will Like It? 51st State is reminiscent of Race for the Galaxy but with the Neuroshima theme rather than sci-fi. If you like RftG and dystopian societies, you may enjoy the theme. However, because of the complexity of the rules, this is not a game I’d recommend for new gamers or those prone to Analysis Paralysis. But if you don’t mind a big rulebook and are looking for something a bit different, 51st State may fit the bill.

Ok, I have to admit, I’d heard of a game called Neuroshima Hex but besides that I knew basically nothing about the Neuroshima before I looked it up on Wikipedia (and you can too!). But all you really need to know to play 51st State is this: the U.S. was devastated by nuclear war and there are little pockets of survivors in different areas. It’s kind of funny to me that a Polish RPG system would be about the post-war U.S., but that’s the gist of it.

The artwork helps to get you into the world and the mechanics seem to go with the storyline. Gasoline, a very precious commodity, is used as currency to negotiate deals. Weapons, of course, allow you to conquer territories. Scrap and Building Materials are used to incorporate new districts or rebuild. The locations also call to mind abandoned factories and equipment, burnt-out vehicles used for scrap, and repurposed military installations.

That said, the gameplay can still feel pretty abstracted when you’re still learning the rules, but I think the illustrations and names of the cards go a long way toward creating the right mood. Scoring track is on the back of the box.

51st State comes with a deck of cards and a whole lot of little cardboard tokens:

There’s also a sizable rulebook (only 12 pages, but with tiny text), and the scoring track is printed on the back of the box. I believe the rulebook was probably translated from Polish but it’s done pretty well, but there’s just a lot to take in. If you’re planning to teach this game to friends, I highly recommend reading through the entire thing and maybe even setting up a mock game on your own so you can work out the kinks before everyone arrives.

I really like the artwork, which is gritty and industrial. The game’s logo looks like a worn embroidered patch, which for some reason really appeals to me. The cards are laid out well, with three sections of icons representing Conquest, Negotiation, and Incorporation — for Conquests or Negotiations you tuck the card under your base and only the relevant icons are visible.

However, there are a lot of icons in the game. The cards make it easy to locate the relevant icons, but the summary of icons takes up nearly two pages of the rulebook. We’ll get to that more later, but this is not a game in which you’ll be able to learn and memorize all the icons the first few times you play. Count on referring to that rulebook frequently.

The tokens are typical cardboard chits, pretty easy to identify and about dime-sized. There’s a lot of them, so if you decide to sort them before playing it may take some time. One odd thing about the victory point tokens is that they have different values on the two sides: one type has 1 or 2 points, and the other type has 3 or 4 points. I suppose it’s nice so you don’t have to have quite as many tokens, but it also means that if you accidentally (or intentionally) flip over a token, it changes the number of points you have. The cards are standard sized, decent quality but not super sturdy. My set started showing some wear on the edges after the first two plays or so.

Now, about the box. You can see in the components photo above that the game is basically a deck of cards and a bunch of small tokens. Even sorting and bagging the tokens separately, the whole thing can fit into a much tinier space. You don’t really need the huge box (which comes with a very flimsy cardboard divider) for any reason except for the instructions and — oh, yeah — the scoring track on the back of the box. But even that’s not really necessary, because you calculate your score at the end of each round. You can’t get rid of the rulebook, though. 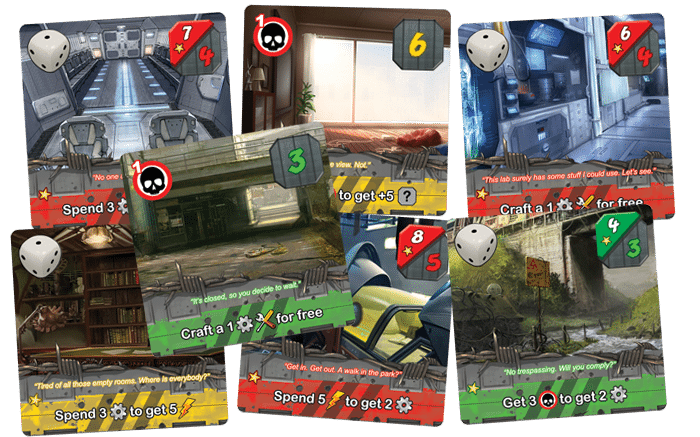 The object of the game is to get to 30 victory points first (during Phase 4 of the round).

Each player chooses one of the four factions (see the image at the very top of the post), each of which has slightly different strengths and abilities. You get a faction Base card and three Permanent Contact cards which can be used (with appropriate resources) to Conquer, Negotiate, or Incorporate. There are also a few tokens. The rest of the cards — Locations, Contact cards, and Leaders — are shuffled together in the deck and each player gets four to begin.

Each round has 5 phases:

Lookout Phase: This is basically where you get more cards. The rules are kind of complicated, indicating how many cards to lay out, when to replenish and not to replenish. Essentially, though, each player will get to choose two face-up cards and one face-down card in turn.

Production Phase: Everyone looks at their available locations to produce resources. Each faction Base produces 3 Workers and 1 specific resource. Any Deals made (by negotiating) will also produce resources during this phase. Spoils (from conquered locations) can be exchanged for resource by discarding the Spoils card. Finally, any locations marked with a production icon will produce whatever the card indicates.

Action Phase: This phase is the bulk of the game, and there are a bunch of different actions that can be performed. Each player does one action (or passes) until everyone has passed once, and then the phase is over. I won’t list all of the actions here, just some of the more major choices. You can Conquer, Negotiate, or Incorporate a Location from your hand if you have the right combination of resources and Contact cards. You can send workers to work at a Location (which often results in either resources or victory points). A few of the leaders and locations.

Here’s how the Conquer/Negotiate/Incorporate action works. Each Contact card has one type of contact on it (color coded red, blue, or grey to go along with the three zones of the Location cards). Conquering generally requires weapons, Negotiating requires fuel, and Incorporating requires scrap, although there are some cards in the deck which allow you to use these actions without additional resources. Each Location has a “distance” from 1 to 3, and the Contact cards also have numbers from 1 to 3. Your Contact ability has to be at least as high as the distance on the card in order to use the action.

If you successfully Conquer or Negotiate with a Location, that card gets tucked under your faction Base card so that only the red or blue strip shows. There’s a row of icons that shows what resources or benefits you get from that Location — there are always more spoils (red), but it’s a one-time use. Deals have fewer icons but you’ll get to collect that resource during every Production phase. However, you can only have 3 cards tucked under your base at any given time (with some exceptions).

Incorporation is a little different. When you Incorporate, the Location card goes on the table in front of you and you refer to the large grey area in the center, which has more icons. If there’s a little factory at the bottom of the picture, then it’s a production facility and will produce some resource (or workers) each round. Some Locations will allow other players to send workers, and some can only be used by you. There are also some cards which simply give benefits like victory points.

VP Count Phase: Once everyone has passed, you count up victory points to see if anyone has reached 30. Each Location card is worth a point, as are Leader cards. In addition, some Locations will produce victory points by various means during the turn, which are tracked with the tokens. If anyone hit 30 points at this phase, they win. Ties are broken by number of cards in hand, then number of unused resources and workers.

Clean-Up Phase: At the end of the round, all unused resources, workers, contact, and redevelopment tokens are discarded back to the pool. There are a couple cards that allow you to store unused resources, but otherwise everything gets discarded.

I really like the idea behind 51st State, both the theme and the mechanics. I’m a fan of future dystopia stories (think The Matrix — but not the sequels — or Terminator) and this was an easy fit. I also like card games that involve building up an empire of sorts: Citadels and San Juan come to mind.

However, 51st State is extremely fiddly. There are rules upon rules upon rules. The first time you play you’ll probably get something wrong, and you’ll need to keep the rulebook handy even after a few plays to look things up. When I played, I felt like once I got going I enjoyed it and was able to think about planning out a strategy, but it takes a while to get going. If your felllow gamers are prone to the dreaded Analysis Paralysis, this is a game that could drag on forever.

However, if you’re not afraid of a bit of a challenge, 51st State has a lot to offer. I love the fact that each Location card can be used in three different ways — it gives you flexibility in how to build up your victory points and play to your faction’s strengths. The graphics are excellent and it’s a great theme.

Here’s a litmus test for whether you’ll like the game. Take this (awkwardly-translated from the Polish) phrase from the back of the box: “One Card, Three Possibilities, Tens of Decisions.” If you think that sounds cool, then try 51st State. If your reaction is, “Oh, no! Not more decisions!” then you might want to avoid it like a nuclear wasteland.

The Return of King Doug: A Funny Take on Fantasy Tropes