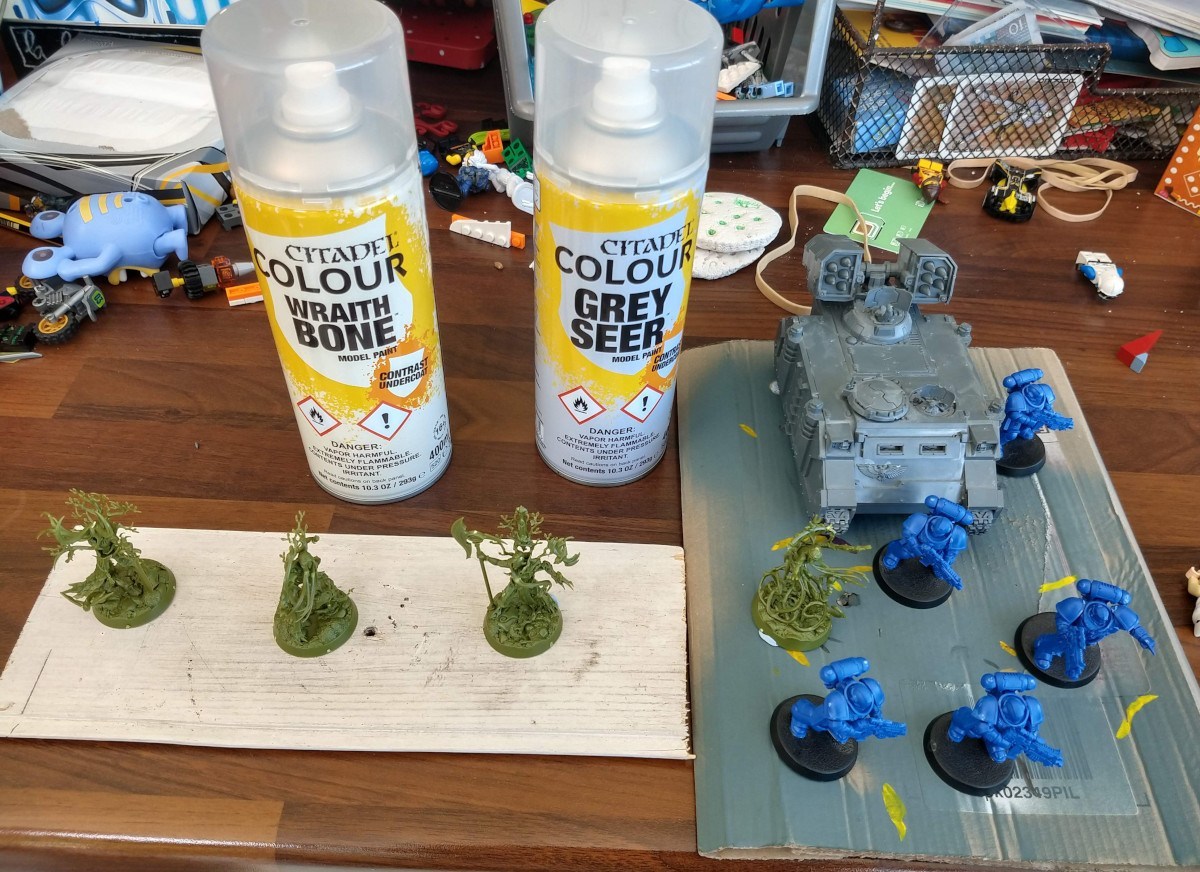 Big changes are afoot over at Citadel Colour as Games Workshop tries to change the way you paint. Or rather, tries to encourage those of us put off trying to paint because of time and talent constraints. Citadel Contrast has been released under the slogan, “1 thick coat.”

The paints have been specially formulated to go over new “contrast” undercoats and then leave the recesses shaded and the edges with rudimentary highlights. This should cut down the painting time and make it easier to batch paint large armies. Or so the theory goes.

GeekDad has been lucky enough to have been sent a box of contrast paints and, over the coming weeks, I’m going to be testing them out to see whether they’re going to revolutionize my painting life.

I’m going to be taking a four-pronged approach.

The holy grail for most GeekParents is having their kids join them in their nerdy passions. I’ve written before about painting with my kids, but if I’m honest it rarely happens. There are a number of reasons for this, including space constraints, my own lack of enthusiasm for clearing up paint and repairing my paint brushes, and sorting out tantrums.

Tantrums? Who’s having tantrums? Well, in my house at any given time, it could be any one of us, but I tend to find that artistic endeavor often ends in tears. Sometimes due to sibling rivalry and general winding up, but more often than not because the finished miniature doesn’t look like the ones in White Dwarf magazine.

My oldest, in particular, becomes very frustrated when his painting doesn’t look how he imagined it will. This is a hard skill to learn. I’m still not quite there myself and I’m 32 years older than he is. This problem is exacerbated because, not unreasonably, he wants results fast. If there’s one thing worse than having your models not turn out how you wanted them, it’s spending a long time getting to that place you didn’t want to be.

I don’t think Contrast paints are going to completely solve this problem. Most teenagers’ (and indeed adults’) miniatures don’t look like the ones in White Dwarf. Contrast is not here to make our miniatures look better. It’s here to make them look “good enough” in less time. They’re for when you don’t have much hobby time or have lots of models to paint.

Seeing as my son doesn’t have time to tidy up around the house, do his homework, or even put his clothes in the wash basket, he really must be short of time to painstakingly paint his army. (Curiously, he had time to take my money down to the shop to buy said army.) Contrast paints should give him quick results, covering what is usually 2 or 3 steps in one sweep of the brush.

Going down the ages, my middle son has even less paint patience than his brother. Fortunately, he’s also far less exacting. Some broad sweeps of the contrast brush to give some rudimentary highlights and he should be more than happy. My youngest son? Well, who knows what will happen there? He’s as predictable as the British weather.

The boys have chosen some Space Marines, with one of them desperate to paint his tank. It’s fairly well documented that Contrast paints aren’t really designed with flat surfaces in mind, so it will be interesting to see how this goes.

2. Using them To Paint to a Decent Standard.

This is to my “decent standard.” Which is OK, but not exceptional. I’m interested to see if I can get to grips with these paints to produce models I can be proud of. I have some Sylvaneth models from Warhammer Underworlds: Nightvault to paint: “Ylthari’s Guardians.” I really love these models and I think with their natural textures and potential for a nature-inspired color palette, they’ll make an excellent test of the paints’ capabilities.

You can already see how a seriously good painter, Tyler Mengel, has done this with Contrast Paints, on the Warhammer Community website.

3. Using them over Metal.

One of the things the slightly translucent properties of the paint offers is the possibility of creating colored metallics. I’ve done this a few times over the years with standard paints, most recently to create a rich tangy red, using GW’s “Blood for the Blood God” paint. The Contrast consistency is not dissimilar to BftBG, so they should make excellent pigments over metallics.

I’ve got hold of a couple of Necron models, which have been sprayed in Leadbelcher (gunmetal) and I’m interested in seeing if I can use the Contrast Paints to give them a spectral glow.

4. A Lord of the Rings Speed Paint Comparison.

My birthday present to myself this year was FFG’s Journeys in Middle Earth (affiliate link). Which of course has since sat on my shelf doing very little. It’s my hope to record some solo playthroughs of the game for my YouTube channel, Agents of Sigmar. In order to do this, I need to paint the models.

This sort of task can seem insurmountable in amongst family life, but this year I discovered Midwinter Minis. Midwinter Minis is an excellent YT channel that has completed an impressive speed paint of GW’s Blackstone Fortress. In his tutorials, Guy lays out excellent tips and techniques for getting good looking models in an impressively quick time. They really work! (You can check out the fruits of my labor, here).

Long-term GeekDad favorite, Sorastro, has been making the official painting guides to Journeys in Middle Earth. Again, he describes his techniques as a “speed paint,” though I suspect his definition of the term, and mine, might be a little different.

Throwing Contrast into the mix seems like an excellent way to compare methods, techniques, and results and see which of the three methodologies produces the best miniatures in the quickest time. The Journeys in Middle Earth set has multiple copies of most of its figures, so this should be a fair comparison of all three methods.

The Slowest Fast Paint Ever.

Parenting and miniature painting aren’t the greatest of bedfellows and I’m some way behind the curve on testing these paints out. There are many different explorations of the paints’ properties across the internet, but I like to think GeekDad’s is one of the few written by somebody painting level sits around “average,” and I’m almost certainly the first to have handed the paints over to the kids and seen what they can do with them (maybe).

In the time it’s taken me to write the whole of this piece, I have done a fair amount of the work outlined above, so look out for my follow up pieces soon. 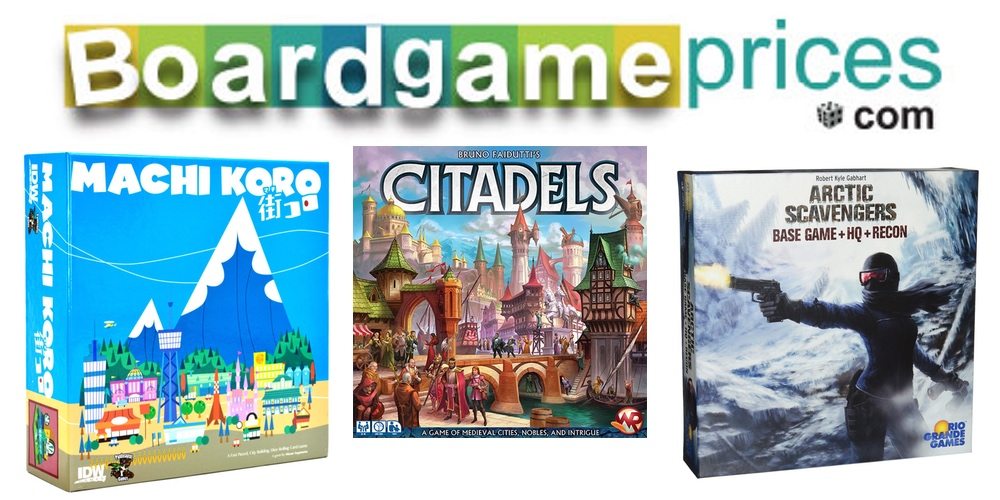 Top Board Game Deals for March 2017 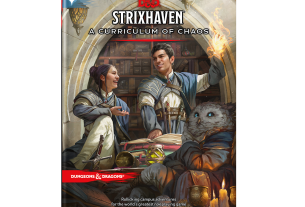 4 Things That Make ‘Strixhaven: A Curriculum’ of Chaos a Great ‘D&D’ Book