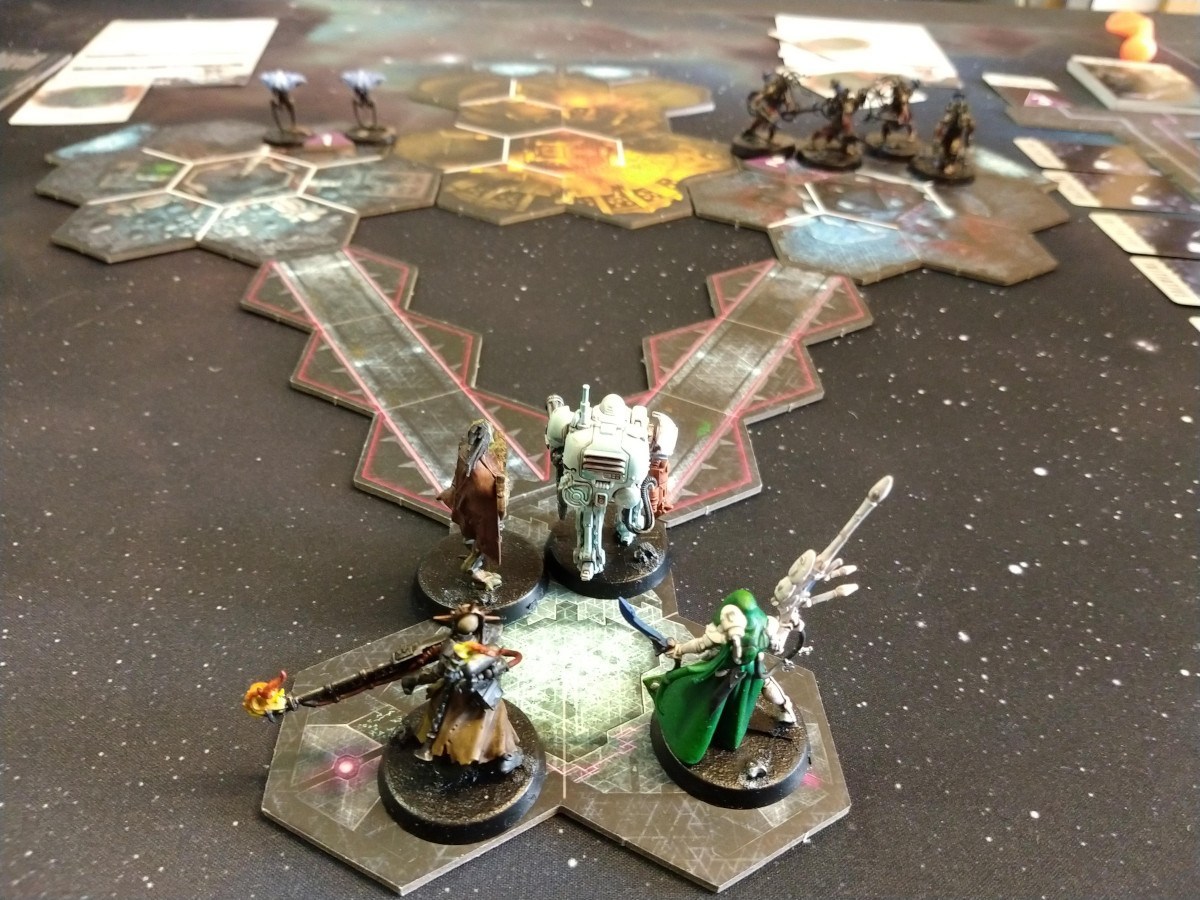 Last Christmas I picked up a copy of Blackstone Fortress to play with the family. This didn’t quite work out how I hoped, as my middle son was still a little young to play. Nevertheless, I have continued to play the game with a couple of friends and recorded the experiences for our YouTube Channel, Agents of Sigmar.

This post, then, is not a full review, but a break down of my experiences about the game, and the things I like and dislike about it.

What is Blackstone Fortress?

Blackstone Fortress is the third game in the Warhammer Quest series, since its reboot in 2016. It’s also the first game to be set in the Warhammer 40,000 universe. All previous incarnations take place in a fantasy setting. It is, in essence, a SciFi cooperative dungeon crawler. With awesome minis.

The game is designed for up to 1-5 players. With 1-4 players, each person takes one or more explorers. When 5 people are playing, the 5th player takes over control of the enemy miniatures, otherwise they are controlled by the game’s enemy A.I.

The Blackstone Fortress is a defunct spaceship behemoth, marooned in deep space. The ship is filled with ancient treasures “archeotech” that is worth both fame and money to plucky adventures prepared to risk all. Games take these “Rogue Traders” deep into the maze-like corridors of the city, as they head towards the fabled hidden vault at the gargantuan spacecraft’s heart. The spaceship has ancient defenses, forgotten monsters, and the players are not the only forces aiming to recoup the archeotech. Sinister forces under the sway of the chaos gods have their own nefarious plans to discover the hidden vault.

This is realized, in-game, by a series of expeditions into the Fortress. An expedition is formed of up to 8 “explorations;” essentially 8 cards that tell you what to do. These cards are drawn randomly from a large selection. Four cards will be “Combats” and the other 4 “Challenges.”

Combats involve laying out the map tiles that come with the game in varying configurations, setting up some bad guys and trying to defeat them. Combats form the bulk of the game. Players have to traverse each map, whilst picking up artifacts along the way. Challenges are usually fun interludes and may include games of physical skill or entertaining dice roll-offs.

Blackstone Fortress is a legacy game. Each expedition sees the drawing of “legacy cards.” These may change the game state for future expeditions, and in addition, once all the cards are gone, the game (in its widest sense) is over. If the Hidden Vault has not been opened then the players have failed. Characters can die exploring the Blackstone Fortress, and if they do, it’s possible they’ll be permanently removed from the game. Once an expedition is complete, rolls are made for each character that was taken out of action whilst in the Fortress. Depending on the results, a character may recover but they may die from their wounds, never to return.

There are also some game mechanics surrounding time spent outside the Blackstone Fortress. Between expeditions, your characters return to the spacecraft, “Precipice.” A hive of scum and villainy, if ever there was one. This, in essence, is the equivalent of the D&D inn characters return to so they can level-up and buy new equipment to aid future expeditions.

What do I think of Blackstone Fortress so far?

We’re only a couple of sessions into our journey but I’m enjoying the game so far. I’ve always enjoyed the “destiny dice” mechanic (employed in all the modern Warhammer Quest releases) which helps generate a random number of extra shared activations for the players each turn. These can really turn a game, and it’s great to discuss and plan together, the best way to use them.

There is quite a steep learning curve for the game, I think. Once you’re up and running it’s fairly intuitive, but some terminology is quite confusing. Most notably, “Combat” means an entire session of a game, using the map tiles (i.e. the resolution of the entire combat card.) In pretty much every other Warhammer game a “combat” is a single fight (whether that be between single or multiple opponents). This unusual distinction makes it tricky to explain things to even those versed in GW games.

There’s a fair amount of flipping through books (there are 5 (I think) very thin books included, a couple of which can largely be ignored, but there are two in particular, that you have to refer to a lot, and I sometimes found myself thumbing through the wrong books, because it’s not always obvious in which book a particular rule should be found. . Nevertheless, it’s fairly straightforward to get the rules approximately right and have a good game. As you get used to the mechanics, things start to slide into place and you can correct your mistakes. Best of all, being a cooperative game, as long as everybody is having fun, it doesn’t really matter if you’re not playing things right.

The game’s AI is good. It feels natural. It’s not as good as the Games Master led Shadows over Hammerhal but it’s a huge improvement over the arbitrary randomness of Silver Tower. The game is entertaining to play against, and it feels like there is a reason for being there, with a defined purpose for your searching through the fortress.

If you’re going to record battle reports, you need painted minis. GW have lots of tutorials on Warhammer TV, but I was going to need something in a hurry. Step up Midwinter Minis. This is a newish, but hugely popular channel devoted to speed painting miniatures. It has a heavy Blackstone Fortress bias, but the techniques used on the channel are applicable across all types of miniature painting. Check out the channel today. It’s saved me lots of time AND convinced me that even speed painted minis look great on the tabletop.

I do hope you’ll watch our Blackstone Fortress video series. Episode 3 will arrive later this week. You can expect to see bad tactics, jokes, and singing.

Congratulations to the Winner of the GeekDad Battlefield 3 Origin PC Token Giveaway!

Pick Your Brackets in the GeekDad Basketball Group