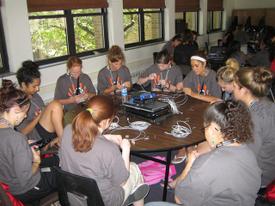 You may have noticed that Best Buy and its in-house technology troubleshooters, Geek Squad, don’t have the best reputations on the web.  While they’ve surely earned a certain amount of scorn thrown their way, they also do something that should earn them a measure of praise:  They run an inexpensive-to-free summer camp to get kids educated in how to use technology and how computers and networks are put together.

The Geek Squad Summer Academy has twelve two-day or three-day sessions in ten different locations across the U.S. this summer (five in the east, four in the middle, and one in the west).  It has classes in the web, multimedia, networking, Mac/Apple-specific education, and, in a sign of the times, green technology.  Each session includes other classes as well, in partnership with local organizations—for instance, the Atlanta class includes a class where students build robots.  In between classes, kids can do outside activities or, of course, play video games.

One of the more interesting aspects of the camp is that it has a heavy focus on getting girls and kids in urban markets interested in technology.  It began two years ago in Chicago as an all-girls camp, and, while it is now coed, the staff separates the boys and girls during classes to help the kids concentrate on learning rather than competition or social anxieties.  Many sessions have partnerships with local Girl Scout organizations, which makes them better able to spread the word about the camp.  It seems to be working—the Atlanta camp filled up four days after registration began.

It’s a different spin on the "traditional" computer camp, and one which I hope they will continue to expand in years to come.

(The camp’s cost varies from session to session, depending on the partnerships, but from my research does not seem to ever be more than $20 per student, and is in some cases free.  The only indication of the age range it covers that I could find is that the registration form only allows the years 1989-1999 for a student’s birth year, meaning a range of 9-19 years old.)

GeekDad Day at the Wired Holiday Store This Saturday