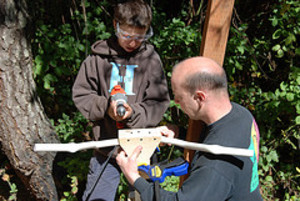 Treehugger has an excellent write up about Gever Tulley’s "Tinkering School," a summer camp where kids as young as 7 handle power tools, engines, fire, spears, and boats of their own creation.

I’ve wanted my kids to attend this camp since I posted about Tulley’s excellent TED talk "Five Dangerous Things You Should Let Your Kids Do." Video games and Lego are great but there’s definitely an element missing from today’s accepted notion of fun, something that Gever Tulley noticed as well. He came up with the school when at a friend’s home he noticed that the kids were not allowed to play with sticks. Naturally, like any self-respecting geekdad, he thought that kids should not be barred from playing with such a natural toy and set about launching his camp where

…With some power tools and sharp instruments thrown in. Nothing epitomizes this idea more than this video of kids in their hand-crafted boats with their hand-crafted paddles. Fellow Dads, did you ever get smacked with the notion that you were born at the wrong time?

This video brings back some excellent memories of exploits at my cousin’s house where we did the same thing—but without the benefit of adult supervision, life jackets, and shallow water! (Ah, those were the days.)

Gever’s got an excellent array of more videos of his kids in action that is sure to inspire your own "risky" projects with the geeklings. There’s a lot we take for granted about when or where we got the start on our own paths to geeky madness. For me, I suppose it was my own "Bad Dad" experience when my Dad and Granddad let me loose in their tool & die shop to grind, drill, and cut hunks of metal and wood into unrecognizable blobs when I was 9. Gever Tulley is on the right track creating similar moments with his campers. Now, when does he start up the camp for their Dads?