Doing magic with your kids is one of the more excellent things you can do as a father. For one thing, kids are a truly appreciative audience, and if you’re an amateur like me, probably the only truly appreciative audience you will ever actually get! Also, kids can be a tough audience, because they haven’t developed the preconceptions that make certain forms of misdirection more effective on adults. Finally, teaching your kids a card trick is a special bonding experience because it involves the sharing and keeping of powerful secrets. 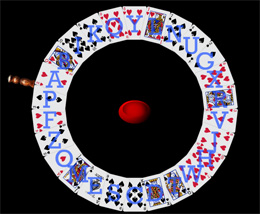 Every few years I renew my casual acquaintance with conjuring. I now have a  small library of books about magic, and a case under my desk which is filled with all manner of scarves, cards, coins and secret apparatus. Because I’m a computer geek,  many of the magic tricks in my repertoire involve the computer in some way. For example,  I’ve made a number of Flash based card tricks, such as Mind Power, shown here.

My most astounding tricks, however, require that a magician be present next to the computer. One such trick is my "Bondoogle" effect, which you can read about on my website.

Most of the card tricks performed by professional magicians involve expert card manipulation, something which I’ve never really mastered, hence my repertoire of computer-assisted slights. However, there is a whole class of tricks which are  called "self working" which can be easily taught to kids and are much easier to perform.

You’ll find a large number of high-quality self-working tricks in the inexpensive Dover series by  Karl Fulves, which includes Self Working Card Tricks and More Self Working  Card Tricks.

I imagine every reader of this blog knows at least one card trick which is worth passing on to a child.  Here’s the very first card trick I ever learned, an excellent first trick for a very young child.

The magician fans out the cards, face down on the table.  He says to the spectator, "Point to a card that you think is a five".

The spectator points at a card.  The magician picks up the card, looks at it and says "Very good, now point at a card that you think might be a seven".

The spectator points at a card.  The magician picks up the card, looks at it and says "Excellent, now point at a card that you think might be a queen".

The spectator points at a card.  The magician picks up the card, looks at it and says "Great, now I’m going to pick up a card that I think is a four."

The magician picks up a card, and lays all four cards face up on the table.

The cards are a five, a seven, a queen and a four!

This trick uses a well known method called "one ahead".

The magician knows the position of the five.  In the simplest version of this trick, you just look at the bottom card and use that card.

When you grab the final card, position it first in the pile in your hand, so that when you lay down the cards, the numbers appear in the correct order.

Quiz: How Much of a Geek Are You?