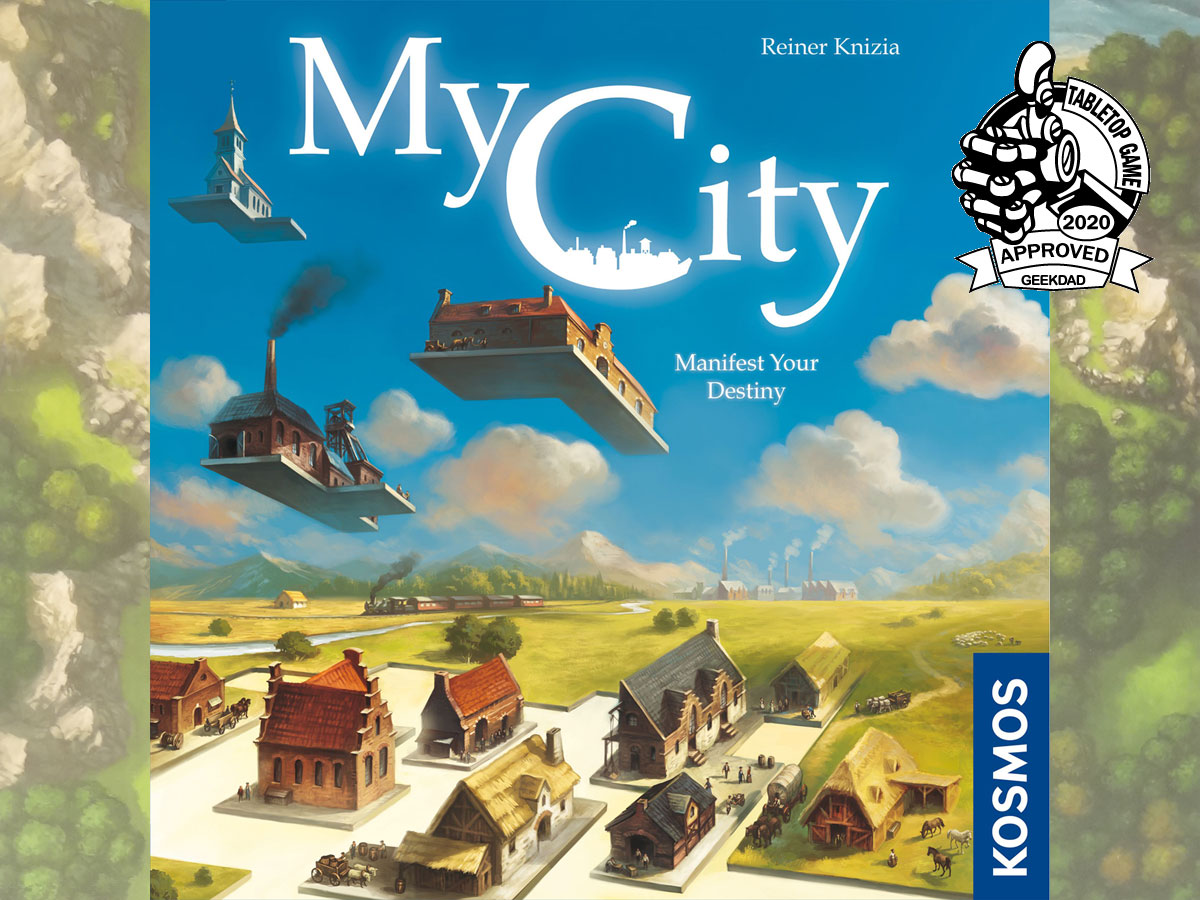 Build and develop your city, from its beginnings through industrialization, in this legacy-style game.

What Is My City?

My City is a tile-laying game for 2 to 4 players, ages 10 and up, and takes about 30 to 45 minutes to play. It retails for $34.95 and is available in stores now. My City includes a legacy-style campaign that is played over 24 “episodes,” as well as an “eternal game” that can be played separately from the campaign. Ideally, for the campaign you should play the entire thing with the same group of players. As for the age rating, my 7-year-old was able to understand the rules and played the entire campaign, though the long-term strategic planning was more difficult—she had fun, but was not able to be competitive.

My City was designed by Reiner Knizia and published by Thames & Kosmos, with illustrations by Michael Menzel and graphics by Michaela Kienle.

Since My City is a legacy-style game, there are some components that are hidden in envelopes at first and will be revealed later. My review will include some images of these components but I’ll try to avoid too many spoilers about the direction of the campaign.

That’s what you see when you open the box, anyway. Of course, the envelopes themselves have other components in them—primarily stickers that will be added to your boards as you play, but there are also some additional cards, wooden components, and cardboard components as well.

The building tiles are polyominoes of varying sizes: there are 8 different building shapes that come in yellow, red, and blue, and each player gets a full set of the same buildings. The buildings are marked on the back with a small colored animal icon, which also matches the icons in the corner of the player boards, so that you can make sure everyone has a full set of buildings. The tiles punch out fairly easily, though the cardboard doesn’t feel like top-notch quality.

The construction cards depict the 24 different buildings, one per card.

Each of the player boards is double-sided. One side is used for the campaign and has various things to fill out: a city name, a series of progress circles across the top, and a wide border on the left and bottom of the board. The bulk of the board depicts a landscape on a grid, with features like a river running down the center, some mountains, rocks, trees, and forests. The other side of the board is used for the eternal game, and shows a similar gridded landscape, though without the extra borders and scoring bubbles—and a few other features that don’t exactly match the campaign board.

You’ll need to have a pen of some sort to mark on your boards—a fine-tip Sharpie works well.

How to Play My City

The legacy campaign is played over the course of 24 episodes, divided up into chapters of 3 episodes each. Each of the 8 envelopes includes a rulesheet introducing the new rules that will be in effect for that chapter, a scoring summary that shows rewards that will be earned in that chapter, and any additional components needed. I’ll give an overview of the basic rules of the game, but I won’t give a lot of details about the additional rules within the envelopes.

Each turn, flip over the top card of the construction deck. Every player finds the matching building in their supply and adds it to their player board. Your first building of the game must be placed adjacent to the river, and each subsequent building must be adjacent to an existing building. (Adjacent means an edge is touching, not just a corner.)

Buildings cannot be built over the mountains or the forest, but they can cover up the rocks and individual trees—rocks that aren’t covered up will cost you points, and trees that aren’t covered up will gain you points. Buildings cannot be built so they span the river, though you can place a building on the other side of a river from another building and it counts as adjacent.

If you can’t place a building, or choose not to, you may spend a point to skip it. If you don’t have any points left to spend, you must place the building or else be done for the episode. At any time, after a card is revealed, you may decide that you are done for the episode and stop (without spending a point).

The player with the most points gets to fill in two progress symbols; the player in second place gets 1 progress symbol. Typically, there are also stickers awarded to players based on placement.

At the end of the 24 episodes, the player with the most progress symbols is crowned the winner of My City.

The “eternal” version of My City is primarily intended for those who have played the campaign—it’s so that you can continue to play the game, though without any more legacy changes. This version uses the other side of the player boards, and includes scoring and gameplay elements that were introduced in the first five episodes, so ideally you shouldn’t play this version until you’ve played at least that far in the campaign, if you want to avoid spoilers. The ruleset used in the eternal game is similar to episode 10 in the campaign.

In the eternal game, players are just competing for the highest score. 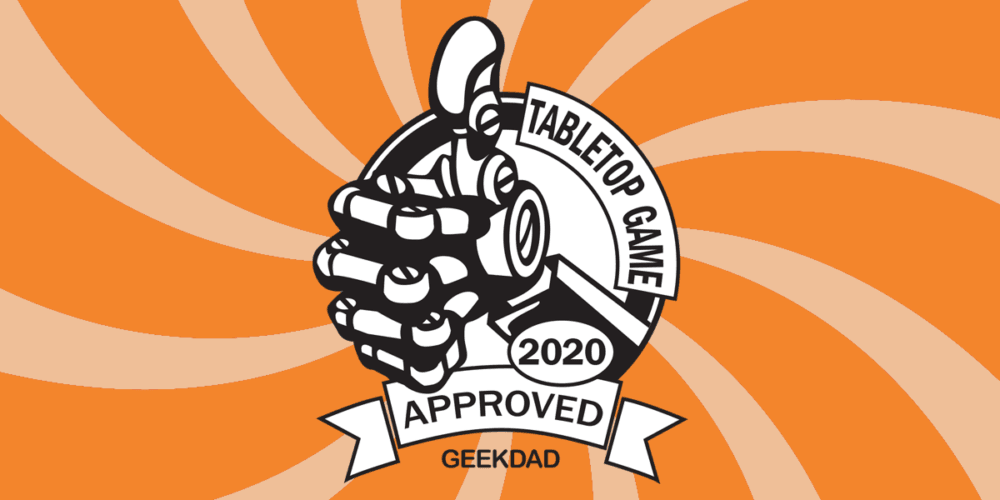 My City is GeekDad Approved!

Why You Should Play My City

I played My City with my 7-year-old and my 16-year-old. My 13-year-old tried the first session with us, but decided it wasn’t her type of game and sat out the rest. At its core, My City is a packing-style game, where everyone gets the same sequence of pieces and has to figure out the best way to arrange them on their boards. There are a number of games that use similar mechanics, like Scarabya or NMBR9, so your enjoyment of My City will depend at least in part on whether you like that sort of puzzle.

I have this piece now that could fit here, but I’d prefer to get this other piece instead… but how long will it take before that other piece shows up? Do I take the imperfect piece now, or risk having a hole I can’t fill in properly later if the cards come in the wrong order? Those are the sorts of puzzles that you’ll have to think about—and they drive my 13-year-old up the wall, because she hates when things don’t fit in perfectly.

And, of course, things won’t fit in perfectly. The cards will come in the wrong order. You’ll create the perfect spot for a building, forgetting that you’ve already used that building elsewhere on your board. It’s a frustration that for whatever reason my brain finds delicious, looking for a solution to every new problem that arises.

Where My City stands out from other similar games, of course, is the legacy-style campaign. Each time you play, the game shifts: just a little between episodes, and a bit more between chapters. The chapters tell the story of a developing city: from the first discovery of the new land, through a gold rush and industrial revolution, and so on. I’ll note that the game sidesteps problems with colonization by pretty much leaving out the actual people. Yes, there are people illustrated on some of the buildings, but the gameplay is largely abstracted: rocks are bad, trees are good, and buildings are packed in from edge to edge of the territory as much as you can. There are no indigenous people to be displaced. There is something there about the way the landscape changes over time, but the game doesn’t really dig into any moral or ethical issues about cutting down forests or mining ore from the mountains.

Each episode of My City plays fairly quickly—one time through the deck (sometimes with a few agonizing decisions), and it’s over. Although 24 episodes can sound daunting at first, we often ended up playing an entire chapter in one sitting, so it took us only 7 or 8 sittings to play through the whole campaign. I liked the way that new features were introduced as we played—some elements were added that stayed through the whole campaign, while others were present for a few episodes and then removed again in the relentless march of progress.

I also liked the way that the rewards for each episodes served as a bit of a balance: for instance, in the early episodes, it was common for the winner to add rock stickers to their board, and the loser to add tree stickers to their board, serving as sort of a catch-up mechanic. We all started with identical boards, which meant that there was an ideal placement of the buildings in the first game. But as our boards diverged, each player had different optimal placements that would cover up rocks, reveal trees, and so on, which meant that you couldn’t just crib from your neighbor’s work (one of my complaints with Scarabya).

Since everyone is playing on their own board, it can feel a bit like multiplayer solitaire, where you can’t directly affect another player’s actions. However, in many of the chapters, there were elements that introduced a race aspect to the game: the first person to do X during the episode would get a bonus. That gave you a reason to watch what other players were doing, because there were often trade-offs between completing the race objective and maximizing your episode score.

My City is a great entry point into legacy-style games for those who haven’t tried them before. It can be a little nerve-wracking the first time you go to put a sticker on your player board (or even coming up with a name for your city to write on your board!), but this eases you into it. Sure, the stickers you put onto your board are permanent decisions, but generally your personal decisions make small, incremental changes, so it doesn’t feel quite as daunting. There are some interesting long-term consequences that play out over the course of the 8 chapters, but it’s best to go into it not knowing what’s coming ahead.

My City was nominated for the Spiel des Jahres this year, and although it didn’t win, it’s easy to see why it was picked. It’s an easy-to-learn game that’s family friendly, and it puts a new spin on the packing genre with the legacy elements. My daughters and I had a fantastic time playing it. We were a little sad to see the campaign end (my 16-year-old won, by the way), but I like the fact that there’s still an option to play the eternal variant if we get the urge to scratch that puzzle-solving itch again.

I highly recommend My City for players who enjoy polyomino games, and if you haven’t tried a legacy-style game yet, this one’s a great way to dive in and see what that experience is all about.

For more information about My City, visit the Thames & Kosmos website. 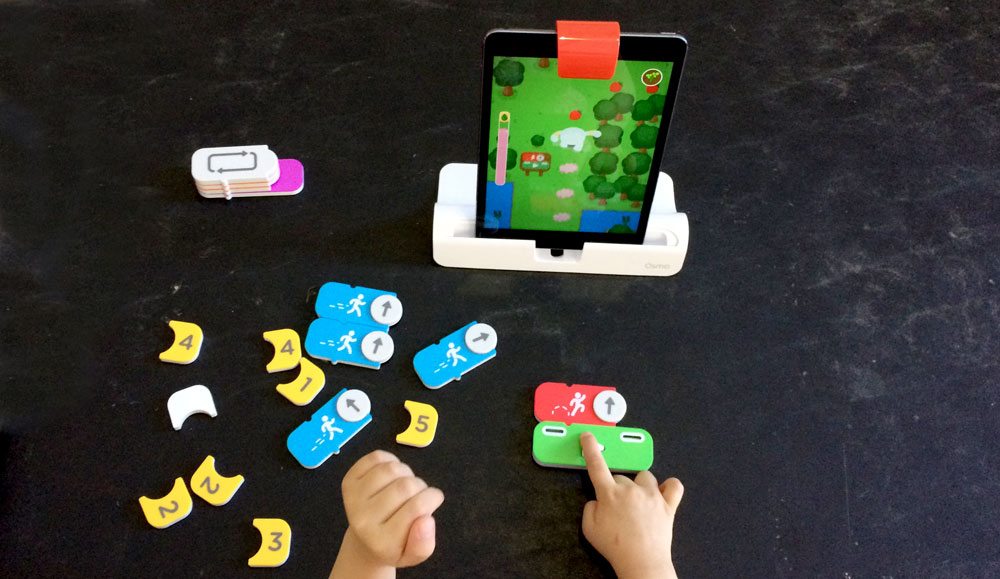 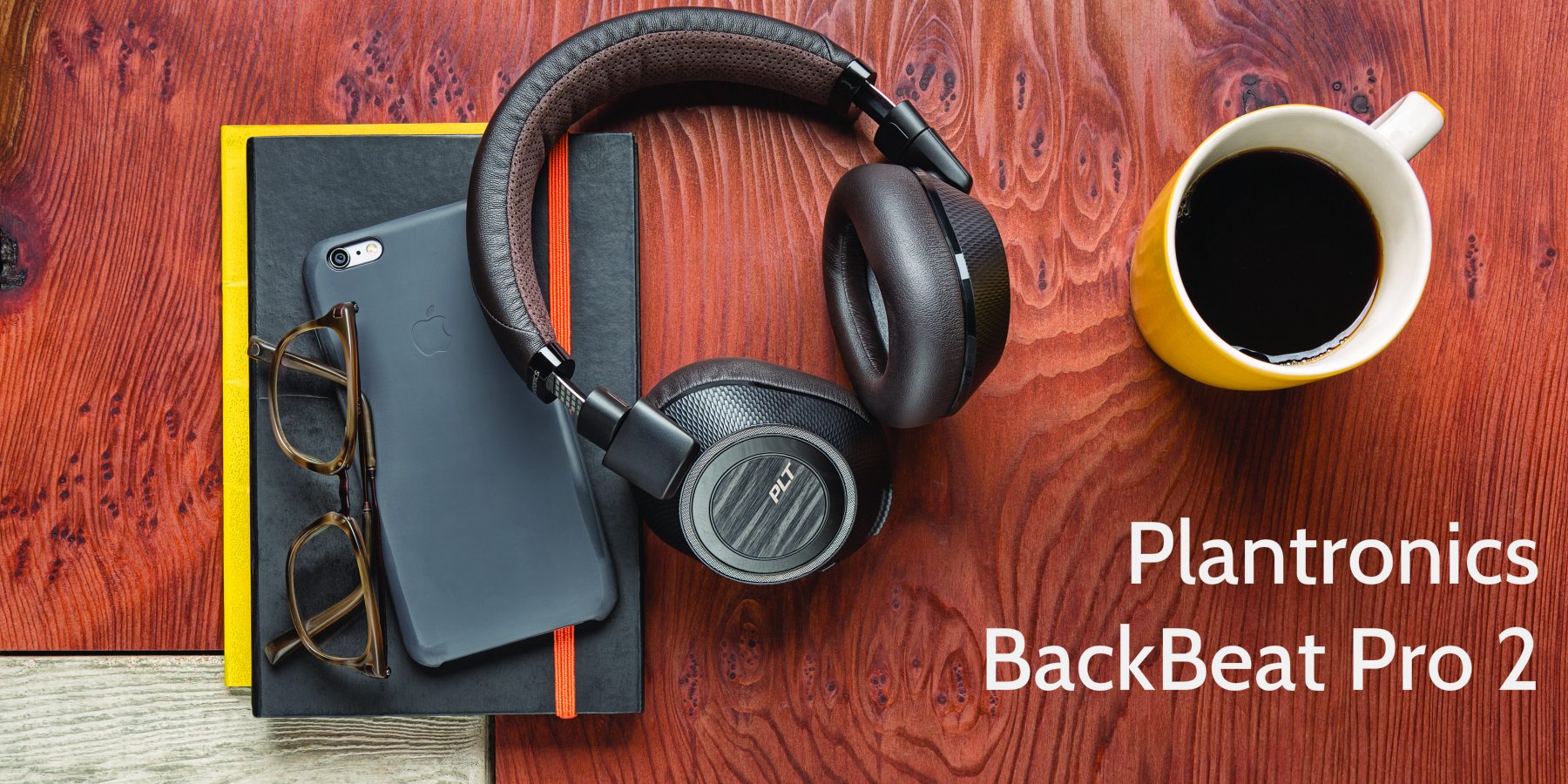 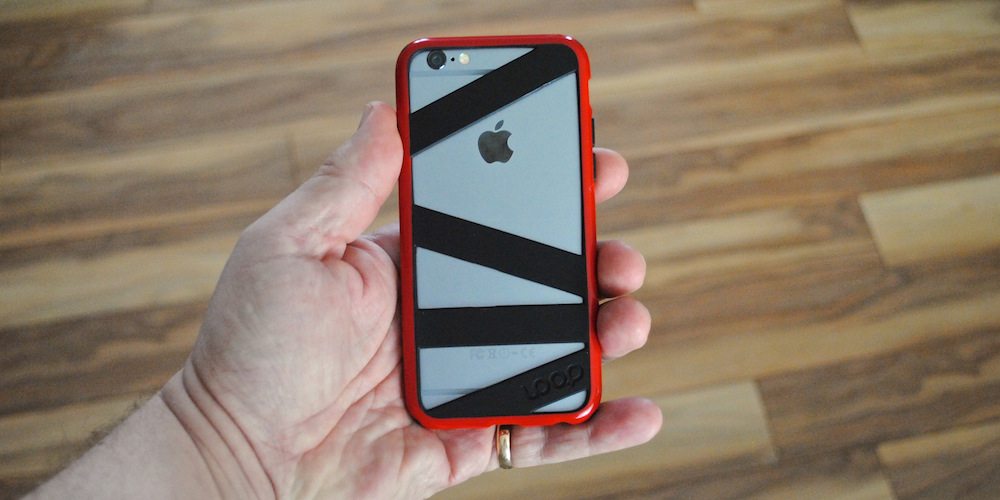