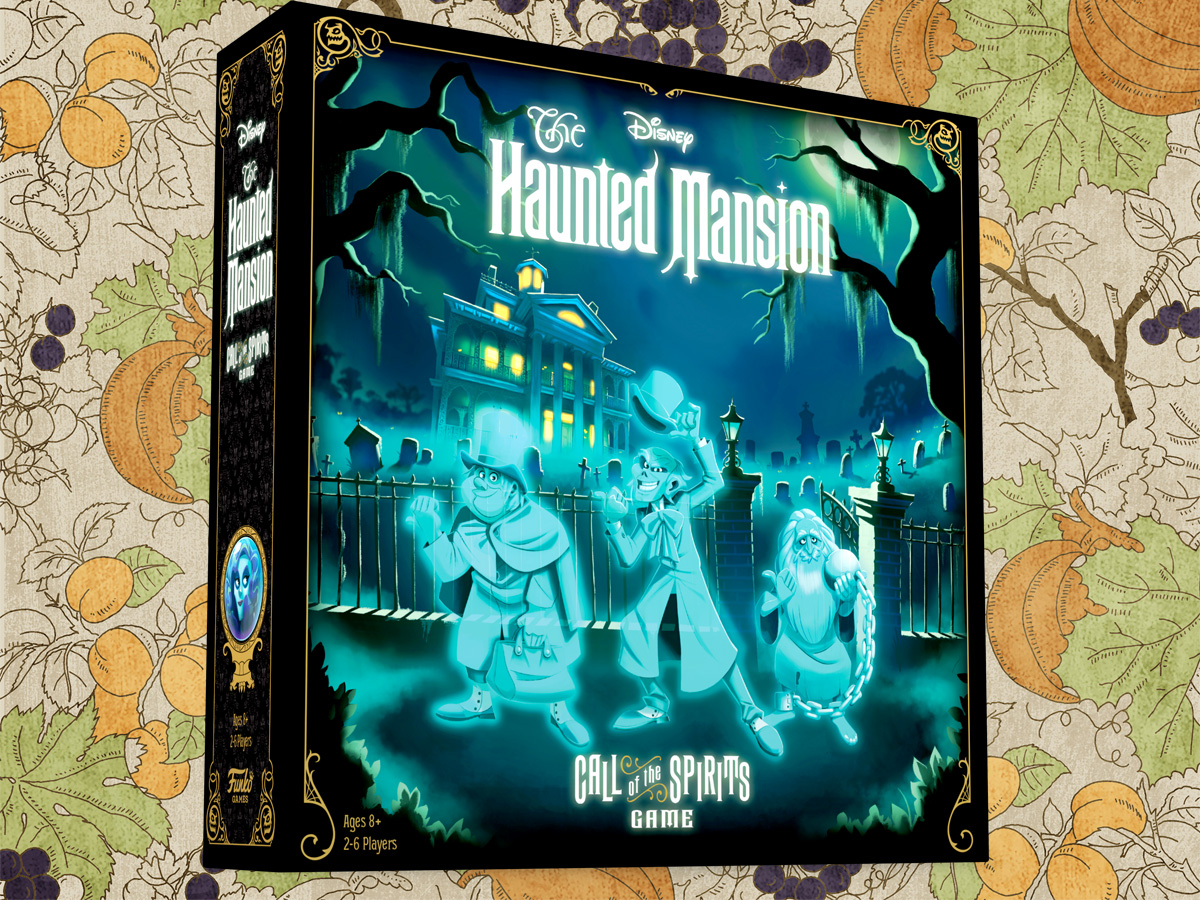 Move through the rooms of the Haunted Mansion and socialize with ghosts to earn points…no Doom Buggy required!

What Is The Haunted Mansion: Call of the Spirits?

The Haunted Mansion: Call of the Spirits is a set-collection game for 2-6 players, ages 8 and up, and takes about 30 minutes to play. It’s from Funko Games, and designed by the team at Prospero Hall, with art by Kiersten Hale, Sam Wood, Charles Deroo, and Lucy Xinwen Cui. It is available to purchase from Amazon, and retails for $24.97.

The Haunted Mansion: Call of the Spirits Components

First off, let me just say that if you’re a fan of the Haunted Mansion ride at Disneyland, you’re going to be delighted when you open up The Haunted Mansion: Call of the Spirits. The production design for the game is certainly a love letter to the attraction, and I found myself humming the music from the ride as I opened the box.

Inside the box lid, you’ll find that you’re looking up towards the ceiling of the stretching room, just like you do on the ride:

And once you remove the instructions, you’ll see the back of the folding player board, with a message to the players matching that on the ride:

The game board is double-sided, but only one side is playable. The back of the board has a nice print of the exterior of the Haunted Mansion. It was unnecessary for the game, but a nice touch for fans:

The playable side of the board shows the different rooms inside of the mansion, all familiar to those who’ve been on the theme park attraction. The Séance room is part of the Endless Hallway, a rotatable circle that inserts in the middle of the board.

Game pieces are of a uniform high quality. The Bidding Dials and First-Player Marker are all made of thick board.

The Player Movers are plastic, and there are Reference cards in matching colors. The Movers may be recognizable to fans as the bat stanchions from the Haunted Mansion. I would have preferred the Doom Buggies, but these certainly take up less space on the board, and are also highly thematic.

The component that will make most fans happy though, is the Hitchhiking Ghosts Mover. Made of translucent blue plastic, it’s a faithful reproduction of the three hitchhiking ghosts from the Haunted Mansion. Sadly, though, this piece does not glow in the dark…a missed opportunity in my opinion.

If I had one serious quibble regarding the components, it’s with the Haunt cards. These are mini cards that you will frequently draw during the game, and there are 120 of them. Mini cards are hard enough to shuffle in small amounts; a deck of 120 is just vexing. These cards function as the negative points you will accrue during the game, and could easily have been tokens you draw out of a bag instead. This would have been a much more elegant solution and saved time and frustration during setup.

How to Play The Haunted Mansion: Call of the Spirits

Socialize with the ghosts in the Haunted Mansion, collecting sets of them worth various points.

Place the Hitchhiking Ghosts in the Crypt.

Shuffle the Ghost card and Haunt card decks, and place them next to the game board. For the Event deck, set aside the Final Round card. Randomly remove a number of cards equal to the number of players and place them back in the box. Shuffle the remaining Event cards, then take the bottom three cards from that deck and shuffle them with the Final Round card, placing those four cards on the bottom of the Event deck.

Place the two Bidding Dials near the game board, and the player who most recently heard a ghost story takes the First-Player marker.

Each round consists of two phases: the Event phase, and the Action phase.

The First Player draws an Event card, placing it next to the Event deck. The Hitchhiking Ghosts are then moved the number of rooms and direction indicated by the card.

The First Player then draws a number of Ghost cards equal to the number of players, plus three. They place the first two Ghost cards in the same room as the Hitchhiking Ghosts, then place one Ghost card into each room moving clockwise until they have placed all those cards.

Finally, read the Round Condition on the Event card. That condition will be in effect the entire round.

Starting with the First Player, each player can take up to 3 actions on their turn, and then play proceeds clockwise to the next player. These actions are:

After every player has taken a turn, the First Player Marker is passed to the next person clockwise, and a new round begins.

If the Event card revealed is the “Final Round” card, then that will be the last round of the game. Three extra ghosts are drawn when placing ghosts in this round. After all players have taken their last turns, scoring happens.

Before scoring, each player counts their Haunt cards. Whoever has the most must discard all Ghost cards of a type that they have the most of. If there’s a tie, they must discard the type that would give them the most points.

Then, players add up their scores. Many cards are worth different values depending on how many you’ve collected. In the example above, the card with the red picture frame symbol would be worth three points if it’s the only one of its type, but zero points if you’ve collected two. And three cards of that same type would yield twelve points!

Whoever has the most points, wins.

The Haunted Mansion: Call of the Spirits – The Verdict

The design team of Prospero Hall has been knocking it out of the park. They’ve been creating a bunch of great titles for Funko Games, such as the GeekDad-Approved Back to the Future: Back in Time. And now they’ve got another licensed hit on their hands with Disney’s The Haunted Mansion: Call of the Spirits.

If you’re a fan of Disneyland’s Haunted Mansion ride, you’ve probably had a preorder in for this game since it was announced. And the good news for you, is that you’ll be very happy when you receive your game. The Haunted Mansion: Call of the Spirits combines fantastic art design with quick and light gameplay. As I discussed with the components, the production design is just phenomenal, translating most of the memorable parts of the ride into a tabletop board game. There are a lot of great Easter eggs for the Disneyland attraction, from the stretching room in the box lid to the Ghost deck having 99 cards (a reference to the 999 happy haunts, though having 999 Ghost cards would have been cumbersome to say the least).

The gameplay is simple enough to teach children, yet still offers enough strategic choices to be engaging for teens and adults. I love the mechanic of moving through the rooms via the Endless Hallway. It’s a great way to give you the feel of moving through the various rooms of the mansion on the ride, though of course you still have full control as the player as to where you end up. I found that dueling didn’t occur that frequently in my games, but it is a nice risk/reward mechanic for when you really need that one card to complete a set of Ghosts, and one of your fellow players is currently holding it.

Managing Haunt cards is important, even though every player accumulates several of them throughout the game. If you draw several of the high point-value Haunt cards, you may need to visit Madame Leota to discard some. After all, if you have the most Haunt points at the end of the game, you could end up having to discard a lot of points. It would be pretty painful to lose that set of 5 musician ghosts you spent all game collecting…and also miss out on the 25 points those cards would have given you!

I only have a couple of nitpicks with the game. As I’d mentioned earlier, it would have been preferable to have tokens to draw from a bag instead of the mini Haunt cards. I actually wouldn’t be surprised to find some custom ones up for sale on the BoardGameGeek store at some point in the future. And come on, Funko…would it have killed you to put some Doom Buggies into the game?

Hurry back! Hurry back! Be sure to bring your death certificate… if you decide to join us. Make final arrangements now! We’ve been dying to have you… 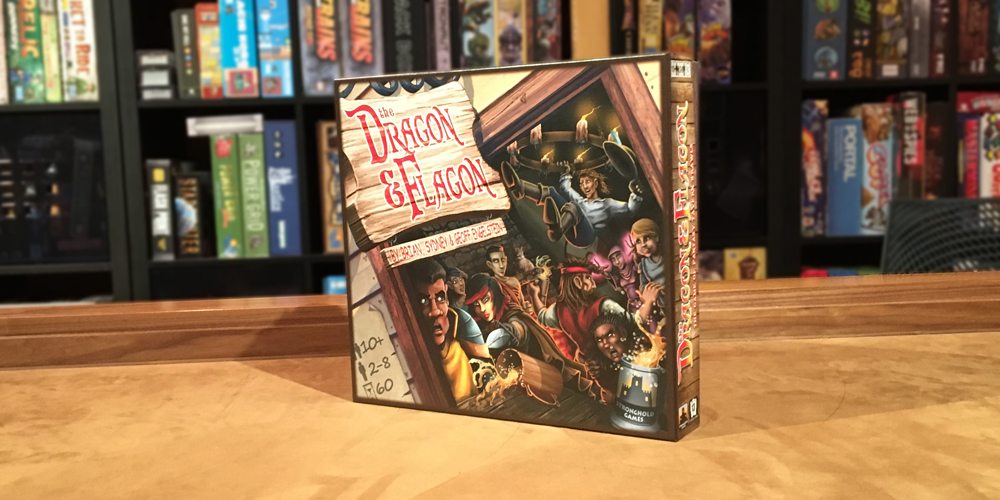 Throw Chairs, Knock Over Tables, and Kick (Cardboard) Butt in ‘The Dragon & Flagon’ 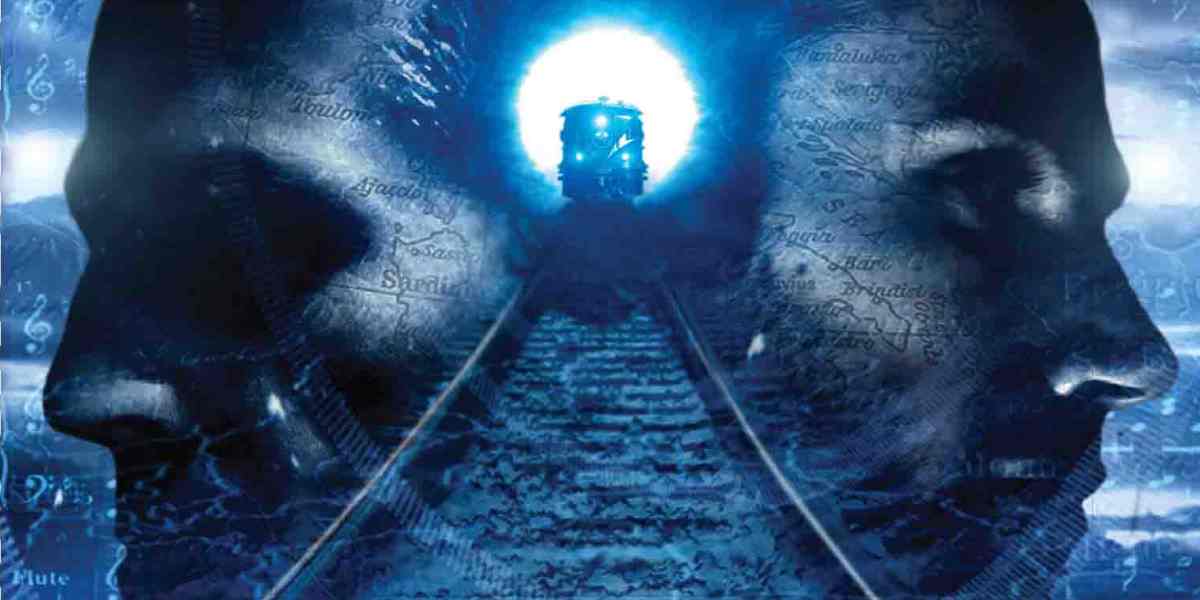