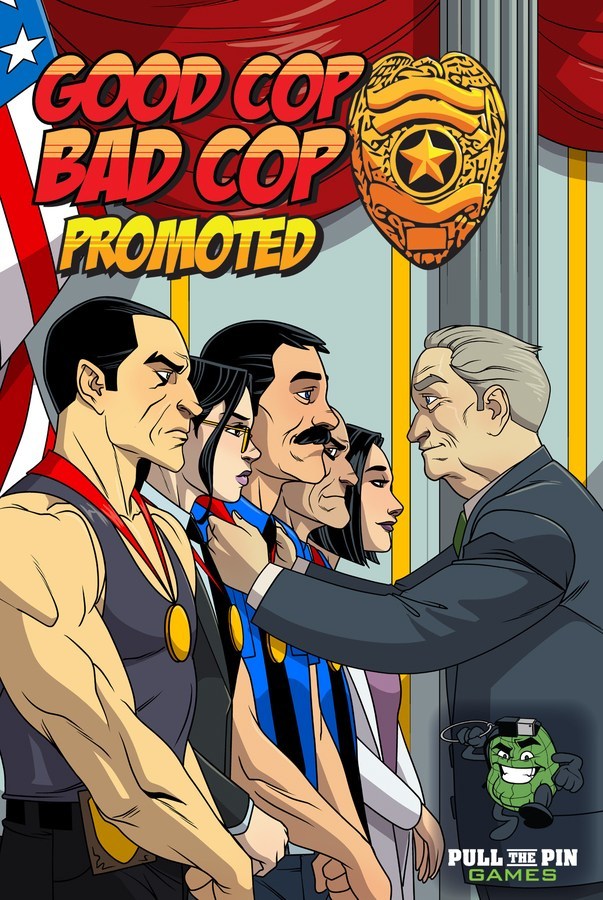 You’ve proven your worth, protecting your team leader on the force—you deserve a promotion!

Good Cop Bad Cop: Promoted is an expansion for Good Cop Bad Cop, a social deduction game for 4 to 8 players, ages 13 and up. (You do need the base game in order to play Promoted.) Each “game” of Promoted takes 15 to 30 minutes, and a full “series” is five games. It’s currently seeking funding on Kickstarter, with a pledge level of $14 for a copy of the game, or $28 for the deluxe edition. Or, if you’re new to the series, you can get the “all in” package for $67, which includes the base game and previous expansions as well. The “13 and up” age recommendation seems primarily due to the theme, which is about a struggle between good cops and corrupt cops trying to track down the opposing leader.

Note: My review is based on a prototype copy, so it is subject to change and may not reflect final component quality. Some of the graphic design is not final.

The deluxe edition of the game will add cardboard medal trackers that look like badges, dual-layered to hold the medal tokens. It will also include a big storage box that will hold the base game and all expansions, with tuckboxes to organize the various sets so you can easily carry just specific sets with you for travel.

The components in this expansion are fairly simple: a set of cards, and some cardboard tokens. The equipment cards are similar to those in previous Good Cop Bad Cop sets.

The promotion cards are new in this game. Each one has the name of a role, and a special ability. There’s a broad range of ability types dealing with equipment, guns, integrity cards, and so on. They have the same comic-book style illustrations (by Dwayne Biddix) as in previous sets, and I like that there’s a lot of diversity and different personalities that come through in the illustrations. (The “Decoy” card, shown above, makes me laugh.) The cards also have little “bullet hole” icons at the bottom—these are used for breaking ties during scoring.

The medal tokens are simple—one side has a star, and the other side has a score, either 1 or 2. They fit on the medal tracker cards to complete the medal pins pictured there.

You can download a copy of the rulebook here. (You can also download rules for the base game.)

I wrote about the original Good Cop Bad Cop when it was on Kickstarter back in 2014, and have since covered the Bombers & Traitors and Undercover expansions as well. I won’t explain the base gameplay here, but feel free to check out those reviews for a more in-depth look at the game. Here, I’ll explain what’s new.

Good Cop Bad Cop: Promoted extends the play into a 5-game series, and your objective is to score the most points by the end of the series.

The main game setup is still done as usual, with these additions: Place the game tracker tokens face-down (with the medal silhouettes showing) in game order. Turn all the medal tokens star-side-up and mix them up. Shuffle the promotion cards and set them nearby. Give each player a medal tracker card.

Medals are kept on your medal tracker; you may look at the point value but they’re kept hidden from other players. When you earn your first, third, and fifth medals (marked with the “up” arrows on the medal tracker), you also get promoted. Draw 3 promotion cards and keep 1, placing it face-up in front of you. Each promotion card has an ability on it—this can be used instead of a regular action on your turn.

After each game, award medals and flip the game tracker token, and then shuffle and re-deal integrity cards and equipment cards for the next game.

The series ends after five games. Players reveal their medals and total up their points—highest score wins. In case of a tie, count up the bullet hole icons at the bottom of the promotion cards, and the most bullet holes wins.

The backs of the game tracker cards also have ranks listed on them: flip them over and compare your score to the cards to find your rank! (And, if you want, you take a selfie with your rank card and share it on social media with #GCBCGame @PullThePinGames.)

I’m not generally a big fan of social deduction games: those where players have secret roles and you’re trying to figure out who’s who based on how they’re behaving. I like it better when there’s a little more evidence involved, like actions you can observe and so on. But even then, the games can be difficult for players who dislike bluffing (or are simply bad at it). Good Cop Bad Cop stands out because it’s one of the rare games in which it’s possible to succeed without actually lying, in part because of the way that your team is determined. Each player has three integrity cards, and your team is determined by the combination of all three rather than a single card. Even as your integrity cards are revealed to other players, there’s always a possibility that the last card could contradict appearances.

Unfortunately, though, current circumstances mean that I can’t play Good Cop Bad Cop with my friends. Because of the way that it relies on hidden information (both in the integrity cards and equipment cards), and cards that can be exchanged and mixed between players, it’s impractical to play over video with remote players, the way that I’ve been managing a lot of my games lately. So my post today is more of an introduction to the game and some musings, but I have not had the opportunity to sit down and play it yet. (My at-home gaming group is limited to myself and one of my daughters, so we don’t have enough players to fill the table.)

The new equipment cards are, as before, a mix of different types of abilities: bullets that inflict more damage, cards that boost investigation abilities, protection from getting shot (or at least the ability to retaliate). The one equipment type I’ve seen that is specifically related to the new Promoted rules is the “Secret Plans,” which gives you a medal if you’re holding it when you get eliminated or at the end of the game. It provides an additional way to earn a medal, even if your team lost.

The biggest wrinkle is the promotion cards, of course. You can have up to three of these in play at a time (though I would guess that getting to five medals to earn that third promotion may be difficult), and from what I can tell, these promotions are permanent and nothing can remove or deactivate them. All of them have a new action you can take on your turn: you can change who gets shot, hoard equipment, get information more easily, and more. They’re a bit like equipment cards, but permanent instead of single-use, and could be quite powerful if used at the right time.

I think it’s interesting that the leader of the winning team awards an additional medal to somebody on their team—it’s a way to give a bonus to somebody who was valuable during that game. However, there’s no guarantee that that player will still be on your side in the next game, and in any event they’ll still be competing with you for final score at the end of the series. I’m curious to see how that will play out in actual play: will people easily pick an MVP to earn that extra medal, or will they simply give it to the person who has the least, in order to spread out the medals as evenly as possible?

Good Cop Bad Cop can vary in game length, just depending on how aggressive players are, but it’s easy to play a few rounds in a row. Depending on how many players you have, that means a full 5-game series could take anywhere from under an hour to over 2 hours, which is a pretty broad range. Promoted is geared toward those players who would want to use Good Cop Bad Cop as the centerpiece of a game night, but perhaps not those who play it as a quick filler between the longer games. This expansion turns Good Cop Bad Cop into the longer game.

I think current fans of Good Cop Bad Cop will enjoy the new twist with the promotion cards and medals; even if you don’t always play the whole series, it may give a more satisfying scoring condition than simply deciding which team won and which team lost. I also like the idea of the combination storage box, since now there have been enough expansions of this small-box game to warrant a single container for those. For those who haven’t experienced Good Cop Bad Cop yet, I encourage you to check out some of my previous coverage to see if it’s a game that your group might like!

Right now, particularly with the news that Gen Con and Spiel have canceled this year, it may seem impossible that we’ll get to sit around a table and play an 8-player game. Hopefully by next February (when this game is anticipated to deliver), things will be looking better. I have a feeling that when we can get together again, we’ll be excited to have games like Good Cop Bad Cop. 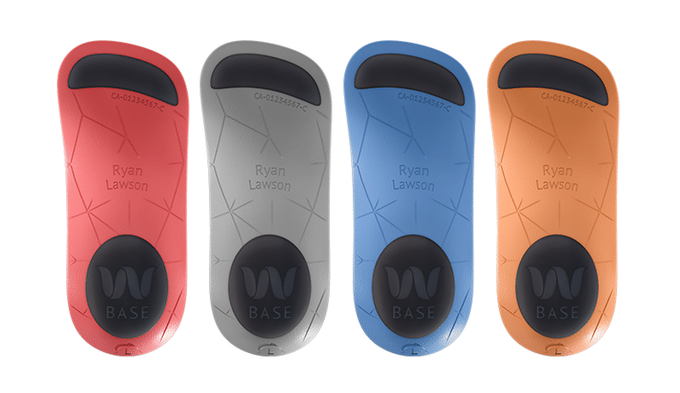 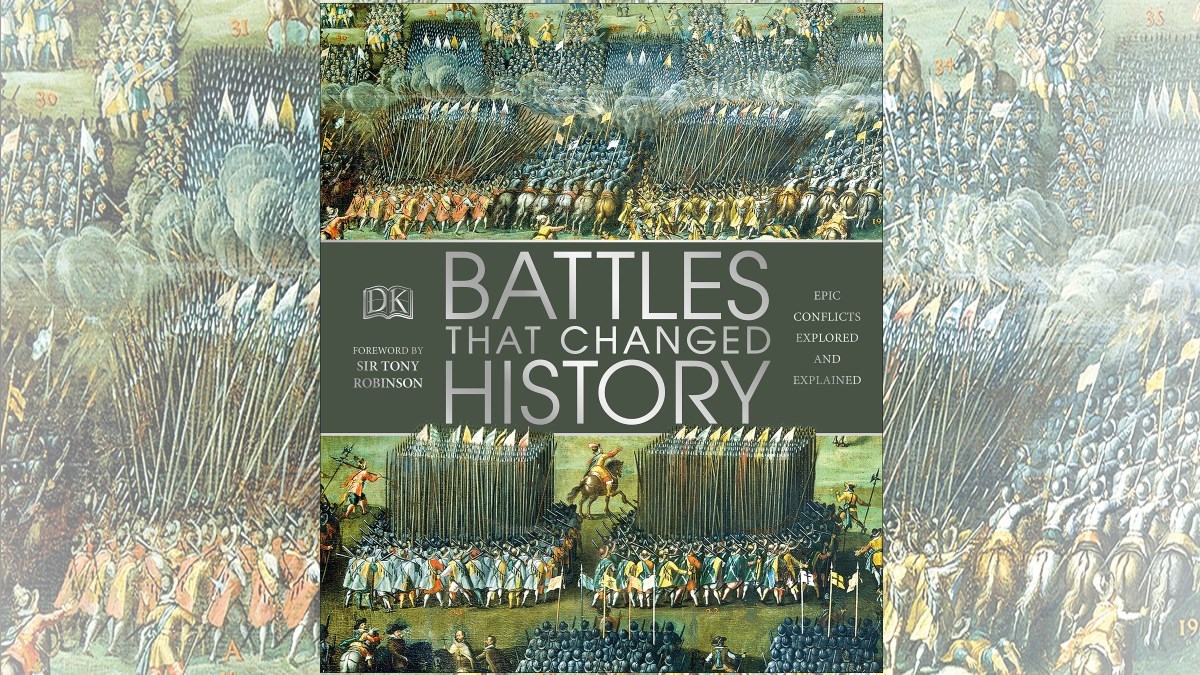