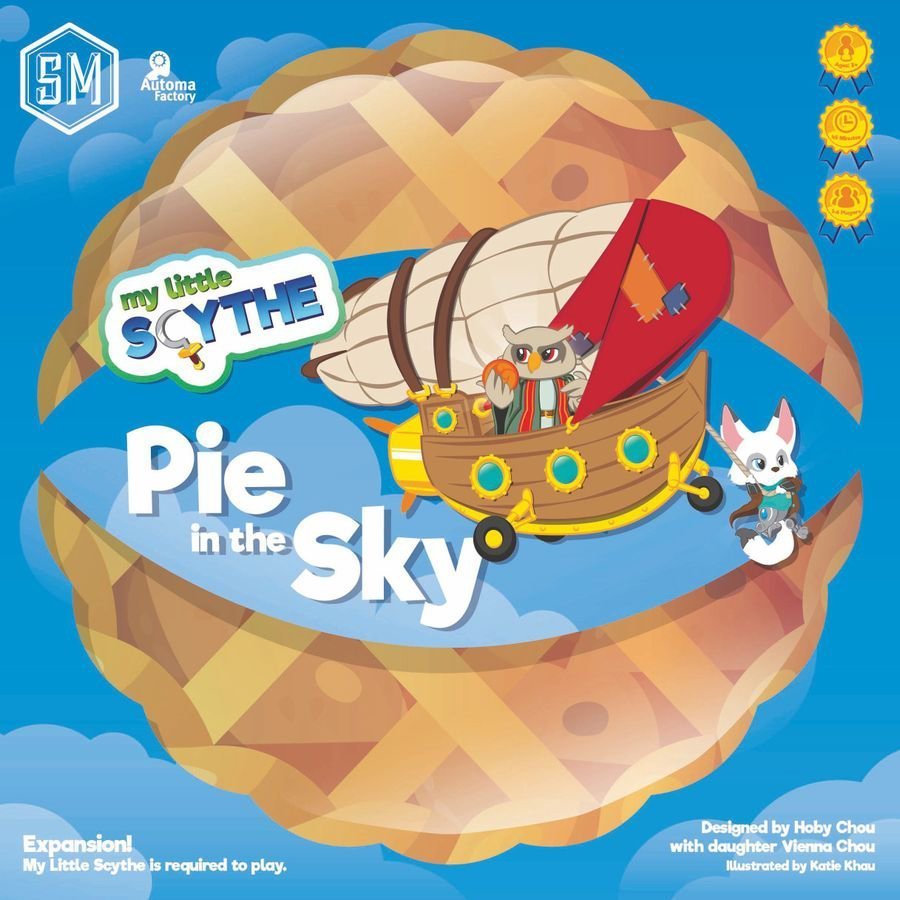 The legendary Airship Kai vanished into the far frontiers long ago—but now it has returned, along with Seekers from the Fox and Owl kingdoms. It’s time for a spectacular Harvest Tournament!

What Is My Little Scythe: Pie in the Sky?

My Little Scythe: Pie in the Sky is an expansion for My Little Scythe, a kid-friendly spin-off of Scythe designed by Hoby Chou and his daughter Vienna. It’s for 1 to 6 players, ages 8 and up, and takes about 45 minutes to play. Note that the base game is required to play. It is available for pre-order on the Stonemaier Games website for $20.

My Little Scythe: Pie in the Sky Components

The expansion includes two new animal kingdoms (Fox and Owl), along with additional components for the 7 kingdoms in the base game so they can use the new airship rules.

The components are comparable to the base game. The miniatures are adorable, as you’d expect; the Fox kingdom is teal and the Owl kingdom is orange. The airship comes with a clear plastic stand so that it can “fly” above the board. Unlike the animals, it is hollow plastic because it comes apart lengthwise, which is necessary to store it in the base game box.

The base game had an excellent tray for the figurines and now you finally know what goes into those last two areas, but there are a few things that don’t quite fit. For instance, if you shuffle the Power Up tiles with the base game’s, the stack is too tall for their sections. Likewise, the extra Base Camp tiles don’t fit into the well with the others, so I have them in an extra card area. It does take a little bit of puzzling to get the airship to fit, but I managed—half in one of the empty card wells, and the other half in one of the gaps left by the upper tray.

The new quests and Power Up tiles include a few that involve the airship, and the quest cards feature illustrations of the Fox and Owl seekers (by Katie Khau, as in the base game).

If you’re picky about details, you may notice that the extra trophy tokens for the original kingdoms don’t quite match the base game—I found that the new tokens were slightly lighter in color than the old tokens. It’s not a big deal to me since it doesn’t affect gameplay, but I thought it was worth mentioning in case that’s something that bothers you.

There’s also an achievement sheet where you can mark off little medals as you play. The idea is that you cross off one medal for each trophy you earn, and as you complete ranks, you’ll get rewards like renaming the airship or your faction. The back has additional achievements that award bonus medals for winning the game based on certain conditions.

How to Play My Little Scythe: Pie in the Sky

You can download a copy of the rulebooks (multiplayer and solo mode) here. I’ll explain the new features in Pie in the Sky but won’t explain the base game; if you’re unfamiliar with My Little Scythe, please see my full review here. I will focus on the multiplayer rules, though there are solo rules available as well.

The object of the game is the same as the base game, though now you must earn 5 trophies instead of 4.

In addition to the regular setup for My Little Scythe, each player also gets an airship mat, placed next to their player mat—you can either use the mat matching your animal kingdom, or randomize them. (Note that there’s one double-sided airship mat with a gear icon that is for the solo mode, and should not be used by a player.) The airship mat also has an extra space for the 5th trophy token. Some airship abilities include a token, which can be placed on your mat or nearby for when you need it.

Finally, the airship miniature is placed on the board, on the portal space closest to the last player in turn order.

Gameplay is the same as in the base game, but now you have access to the airship as well.

Whenever you take a Seek action, rolling dice and placing resources on the board as usual, you also roll the airship die, which has some faces showing a “6” and some showing a trophy. After placing the apples, gems, and quests as usual, you may move the airship. The “6” means you may move it up to 6 spaces, and the trophy means you may move it up to the number of trophies you have remaining on your player mats. However, you may not move the airship at all unless it ends its move on a space containing at least 1 gem or apple.

After moving, you may then use the airship either to collect one resource from its space or use your airship ability. Resources collected by the airship are placed in the cargo hold of your airship mat—they can be spent just like any other resources, but are no longer on the board and are not at risk of being stolen by a pie fight. If you take a resource from another player using the airship, you lose 2 friendship.

Each animal kingdom has its own airship ability. Some let you place more resources on the board, or pull resources from further away. Some place tokens (gadgets) onto the board that have special effects. Each space may only have one gadget in play at a time.

The airship may not be moved into or through the Castle Everfree space, though if you move your animals into the castle for a delivery, you may use resources from your cargo hold as part of the delivery.

My Little Scythe: Pie in the Sky is GeekDad Approved!

Why You Should Play My Little Scythe: Pie in the Sky

I gave My Little Scythe the GeekDad Approved seal when I reviewed it two years ago, because I loved the way that it took a somewhat complex game and made it kid-friendly, both in theme and gameplay, without losing some of the things that made Scythe unique. The game still used the same action-selection idea, where you had to choose a different action each turn, and the idea that your resources were simply the things you were moving around on the board, not things you’d collect and pull off into some private stash.

The friendship track (“popularity” in Scythe) is an important one to manage; though it was simplified for My Little Scythe, it’s still no less important because it’s the first tie-breaker (and it’s pretty common for multiple players to place all their trophies). The reality is that you want to get all your trophies out and be the highest on the friendship track, but there are a lot of actions that can cost you friendship while you’re trying to get ahead.

Pie in the Sky adds airships, just like the Wind Gambit expansion did for Scythe, though this time everyone controls a common airship rather than each player having their own. The mix of airship abilities is really fun—some are more aggressive and some are more friendly, and I imagine it may affect how people choose their animal factions depending on their play styles.

I like that the expansion doesn’t add too much complexity to the game, so it still works for younger players, but does give players some more choices to make while playing. I also like that it introduces some more asymmetry to the game, since each player gets their own airship ability.

The other source of asymmetry, already present in the base game, was the Power Up tiles. At the beginning of the game, the animal kingdoms are functionally identical (unlike Scythe, where there are different abilities right from the start). But once you start installing Power Ups, you gain some new effects that nobody else has. The new Power Up tiles in Pie in the Sky include a couple that work with the airship, but also a couple that could be mixed in even if you’re not using the airships.

Pie in the Sky is still a good deal simpler than Scythe, so if you’re hoping for the full Scythe experience but with cute animals, you may be disappointed. But if you’ve been enjoying My Little Scythe and want to bump it up a notch, it may be a good fit for you. And even if you don’t use the airship itself, your kids (or you) might enjoy having the full set of 9 animal kingdoms, and that alone may be worth the entry fee.

Visit the Stonemaier Games website for more information or to place a pre-order. 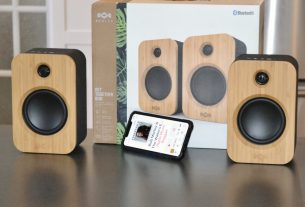 GeekDad Review: Bookshelf Speakers Go Portable With House of Marley Get Together Duo