Ray: James Tynion IV’s run on Batman–continuing with Batman #90— has been building with a mystery involving the masked Designer – and, of course, the introduction of Punchline as Joker’s new henchwoman. I don’t get the hype there, and she doesn’t appear in this issue – but that doesn’t stop this from being the best issue of the run. Mostly a flashback issue focusing on Catwoman’s darkest secret, it uses the framing story of Selina telling Bruce about what she did back in the early days of her and Batman’s flirtation.

Along with Joker, Riddler, and Penguin, the four of them got an invitation from the Designer to come to his isolated mansion. Ferried there by a seemingly undead minion of his, we get a great look at the dynamic of the early years of Gotham villainy. Penguin hasn’t changed much, Riddler tries and fails to be charming, and Joker is repulsive and vicious even then. But none of them are comfortable when they arrive at the haunted-style mansion of the Designer, who takes villain aesthetic to the next level.

Designer has mostly appeared in cameos until now, but he’s highly effective in his first issue. A mad genius who helps villains raise their game to take on their hero, His speech about his origin story is one of the best examples of villainous obsession I’ve seen in a while. He customizes schemes for all of Catwoman, Penguin, and Riddler, cutting them a deal where he makes them legends but takes half the profits – but Joker breaks him, and sets off a bloody series of events that leaves the four villains bound in an extended conspiracy.

This feels a bit like a Gotham riff on I Know What You Did Last Summer, and the ending twist of Batman #90 reveals why Catwoman is so afraid to tell Batman the truth. This entire run has been great, but this issue builds the tension up to an almost unbearable level at times. I’m hoping this doesn’t blow up Batman and Catwoman’s relationship, but what a fascinating wrinkle this whole story has been, and a great addition to Gotham’s rogues gallery. 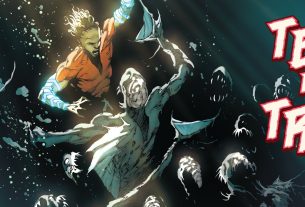