Ray: Strange Adventures #1, the latest and most experimental book from the crack creative team of Tom King and Mitch Gerads starts out with a new name in the creative team – the legendary Evan “Doc” Shaner – and one of King’s most ambitious plots yet. A galaxy-hopping sci-fi detective thriller featuring elements of PTSD, war crimes, post-war propaganda, and other topics that King is undoubtedly familiar with from his work as a CIA investigator, it’s a tense and brutal first issue. But it also feels very familiar in places to Mister Miracle, and has some troubling themes under the surface that I’m hoping are fake-outs designed to set up something compelling down the road. But there’s no question this first issue delivers in compelling characters and brilliant visuals.

Set after a brutal war on Rann, with Adam and Alanna now retired on Earth, it has Gerads drawing the Earth segments and Shaner doing the fantasy-style Rann segments. The story quickly reveals its first tragic twist – we don’t know the circumstances, but Adam and Alanna’s young daughter appears to have perished on Rann. I barely even knew he had a daughter, and I’m not any more fond of dead children to start a story than I am of dead significant others. Adam has returned to Earth a hero, and everyone is fascinated with his story – except for one. A random man accosts him at a signing and accuses him of being a war criminal, having massacred alien forces in the war and covered it up.

This brings up an interesting question – what measure is a non-human? Heroes wipe out invading alien armies all the time, like Peter Parker tearing apart giant bugs in Avengers: Endgame without blinking. The Pykkts, as they’re introduced this issue, are mostly cloaked monster-men who ride giant lizards into battle. But they claim to have some grievance, and the media quickly latches onto the accusations as much as they did onto Adam’s image as a hero. When a mysterious murder on Earth points to Adam as the culprit, his fresh start on Earth starts to unravel and he’s forced to take desperate measures to clear his name – calling in Batman to investigate him.

Batman isn’t comfortable, but the addition of Mr. Terrific as the secondary lead and Adam’s appointed Inspector Javert is a fascinating twist. This is off to a great start, especially in the colorful but brutal Rann segments and in its use of the Zeta Beam’s unique property, but it does have a few issues. Adam and especially Alanna don’t seem all that affected by their daughter’s death, making her feel more like a plot device. Alanna doesn’t seem to have too much to do yet, but I’m hoping that’ll change. It’s hard to tell where a Tom King story is going from only one issue, but this issue makes me think there’s a fascinating one to be told. Let another year of almost unbearable suspense begin as we likely rocket towards a tragedy.

Corrina: First, my compliments on the art. Shanor perfectly captures the classic feel of the Silver Age Adam Strange stories with his cover. And Gerards, well, I run out of ways to describe what he does with art, but, essentially, he’s able to convey the mood of a character or a setting in a single panel, even if it’s sometimes the same panel shown more than once, as is the case with Adam’s book signings.

However, the story is familiar. Anyone who’s read Mister Miracle or Sheriff of Babylon or Batman’s struggles with family, or even Heroes in Crisis, has read this story from King already. King has a distinct voice and that’s not a bad thing but it becomes a problem when all his characters are interchangeable. One could easily slot this story in the Mister Miracle run, change Adam and Alanna’s names to Scott and Barda, and nothing in the story would change emotionally. If you’re read that series, you’ve read this first issue. The problem with going to the same well, including the same mood, over and over is that you miss the chance to do something distinct, specific to this particular character at this particular time.

I’ve written before how unhappy I am with King’s female characters and how we rarely see their point of view or interior life but here, in writing Adam, the maie character, King’s failure to make Adam unique is glaring. The story structure is also familiar as well, with flashbacks to a tragedy that’s as yet unnamed.

If you enjoy King’s writing and Gerards’ art (who can not like the art?), you should want this. But others might feel they’re reading the same old same old. 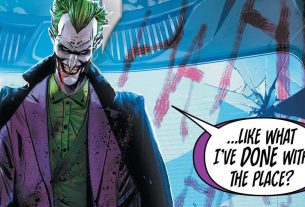 Review – Injustice vs. Masters of the Universe #6: Futures Unlimited