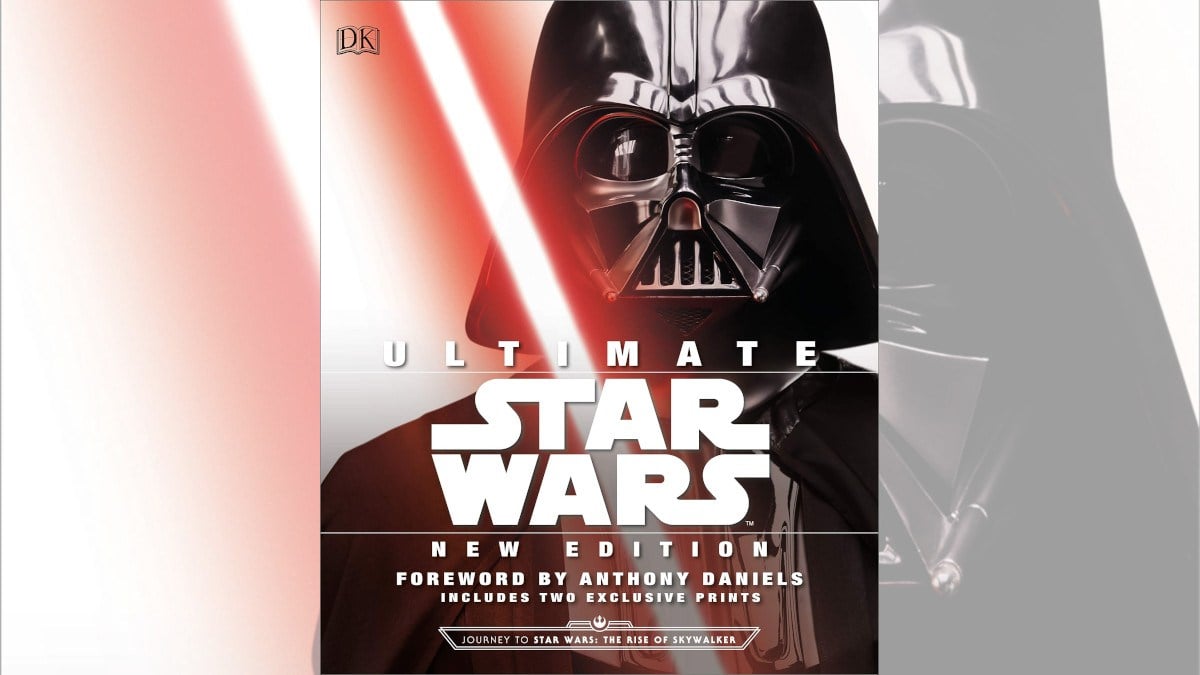 This Week’s Word Is “Skywalker.”

Following hot on the heels of last week’s review of Ultimate DC, I’m back with another glorious DK book, Ultimate Star Wars.

It takes a deep dive into that galaxy far far away, that we all know and love. The book is a perfect gift for all Star Wars fans; it’s like the publishers know exactly what time of year it is! As with Ultimate DC, this is a new edition of an existing book, so do check in case your intended recipient already has a copy (The previous edition is from 2015, so it may not be that different.)

What Is Ultimate Star Wars?

Ultimate Star Wars goes beyond the movies. In its’ introduction, Ryder Windham (one of the book’s co-authors), mentions that knowledge and terms we take for granted, such as Slave 1, IG-88, and Ewoks, are never mentioned in the movies themselves. We’ve assimilated this information from other sources – mostly, in my case, from obsessively reading the back of the Star Wars figure blister packs, deciding where my pocket money was going to go next. But what Star Wars knowledge might we have missed out on? And how do we find out about it, if we don’t know what to look up?

The book aims to be a “unique compendium [that] features a wealth of images and information about many characters, creatures, vehicles, devices, and locations, each one presented in chronological order according to its first appearance in the Star Wars movies, The Clone Wars, Rebels, Resistance, and other official lore.”

A worthy and exciting aim!

Like many DK books, Ultimate Star Wars is broken down into several sections. After the Introduction and Foreward, there’s a brief timeline from the battle of Naboo, right up to the action on Crait at the end of The Last Jedi. After that, we get into the meat of the book.

As mentioned in the introduction, the sections in Ultimate Star Wars are presented in chronological order. This section, therefore, opens with Obi-Wan and Qui Gon Jin. Major characters, such as these, get their own double-page spread, complete with a timeline of their key events in the saga. Characters such as Obi-Wan, Palpatine, or Threepio have information included from across the saga, whether it be movies or TV series. To give you an idea of how deep this book dives, in the Threepio timeline there is reference to 0-MR1 and the phantom limb – the story behind Threepio’s red arm. A story (apparently) told in a one-shot Marvel comic.

Lesser characters, by necessity, have smaller entries, some as short as a paragraph, but no matter how insignificant they were in the saga, all characters are given at least one picture and a short block of text.

Every entry has several one-shot pieces of information that appear directly below their heading. The first is “Appearances.” This is given in code, some obvious “IV, V, VI,” others less so “RO” and “FoD” (Rogue One and Forces of Destiny; it took me a while to work out the latter, as I haven’t actually seen any of them.) Other information includes “Homeworld,” “Species,” and where applicable, “Habitat,” “Average Size,” or “Affiliation.” (It’s not entirely clear that affiliation is the correct choice of word here. “First Order” or “Empire” are fine, but “Watto’s Shop” and “Moisture Farmer,” not so much.)

This section includes a handful of characters who will appear in episode IX, though the information given about them is unsurprisingly scant. It is probably worth mentioning at this point, that there is nothing in the book about the actors that play the characters. You’ll find no biographies of actors or anything similar.

Star Wars is, of course, famous for its planetary environments, and they are all explored in the Locations section, starting with Naboo. Some planets are broken down into several entries; Coruscant includes the senate chamber and the Jedi temple. Some major planets are mentioned more than once. Tatooine is referred to via Episodes, I, IV and VI and appears three times in the chronology. It’s worth noting that nothing is revealed about Episode IX locations.

The information covered in the heading of each location is: Appearances, Region, Sector, and Primary Terrain.

The Battle Droid is given the pleasure of opening this section, followed by blasters and lightsabers. The technology of Star Wars fits almost seamlessly into the story and its something of a revelation to see just how many little bits of tech there are in the movies. In this section, you’ll find Vader’s armor, countless lightsabers and weapons (including my son’s favorite, Westar-35 Twin Blasters), holocrons, and even Sabacc.

The role of vehicles in the allure of the Star Wars universe cannot be underestimated. They’re all collected here, from Naboo Starfighters to the episode IX Y-Wing, via Sandcrawlers, Star Destroyers, and the Millenium Falcon.

Ultimate Star Wars comes with two limited edition prints. One of a very young Carrie Fisher, which takes on a deeper poignance with her untimely passing, and the other brilliant one of Chewbacca sheltering under an umbrella on a snowy set for the Solo movie. The book has a foreword by Anthony Daniels, who also happens to have a new biography out, also published by DK – but more on that, next week.

It’s taken me much longer to review Ultimate: Star Wars than it has other books because it is so engrossing. If you have any sort of interest in the movies and wider universe then you’ll find this book fascinating.

First up, its timeline structure enables you to piece together little bits of lore you might have missed. You can also see who had what weapons or equipment during a particular era of the saga. The inclusion of which movies and TV series characters appear in is a great way of following the threads of the stories, particularly for minor characters.

The breadth of information covered is impressive, drawing on not only the movies but some print media stories too (for example, Thrawn and Kanan Jarrus’ backstories). The print stories aren’t referenced in the book, which is perhaps a shame. For example, a sizeable chunk of Kanan’s story happens before his actual appearance in Rebels, but there is no way to know this, short of knowing it already. A comprehensive bibliography would have been nice, though it probably would have massively increased the scope of the book.

As you might expect from a DK book, the presentation is excellent. It’s filled with fabulous photographs and the text is well laid out and informative. There’s really nothing not to like.

This book is perfect for fans of the saga, especially those who love ALL the saga. There is, perhaps, a little too much text for younger readers, but they’ll love looking at the pictures and finding their favorite characters.

One great thing about this book is that it helps span the generations. I have been able to find characters, places and vehicles that I loved as a child, whilst my own children have been able to explore Rebels, The Clone Wars, and of course the latest films. When they’re now telling me some minute detail about the Clone Wars, we can look it up and share it together, and see if it has a bearing on the story as a whole.

Ultimate Star Wars is an impressive catalog, almost academic in its veracity. If there is such a thing as an essential purchase in the world of Star Wars fandom, this may well be it. That said, I still don’t know very much about where Snoke came from, and I don’t suppose I ever will!