Ray: Batman Universe #6, the conclusion of Brian Michael Bendis and Nick Derington’s Walmart epic, isn’t just the best of the line, it’s one of the best Batman stories in recent years. A dimension-hopping thrill ride that manages to combine Batman the detective with Batman the globetrotting adventurer and Batman the superhero, it delivers some of the best visuals in a DC comic at the moment.

When we last left off, Batman was trapped inside the White Lantern ring, and the creative team does an amazing job with the empty oblivion he faces. This is a rare case where Bendis’ penchant for dialogue serves a story perfectly, as Batman’s inner monologue is the only way he stays sane. Derington manages to capture both absence and the chaotic Green Lantern battle going on outside, and the mysterious artificial intelligence in the ring adds a creepy touch once it shows up. And that’s just the beginning of the insane turns this final issue takes.

When Vandal Savage gets his hands on the ring, things take another surreal twist as he wishes Batman out of existence, and Bruce Wayne turns out to be a far more formidable opponent than anyone guesses. Dick Grayson has been on a search for his memory and identity for the last year, and somehow this creative team manages to blow that storyarc out of the water in less than ten pages.

The fate of Vandal Savage is a hilarious karmic ending that brings a satisfying conclusion to the storyarc of the alternately dangerous and hapless villain. The whole thing comes full circle in the last few pages and ends with a brilliant final splash page. I don’t know if Bendis is planning any more Batman stories in the future, but this arc indicated that he has one of the most unique and compelling visions for the character in a long time. DC printing it again in this format has been an essential step in making sure this gem gets the attention it deserves. 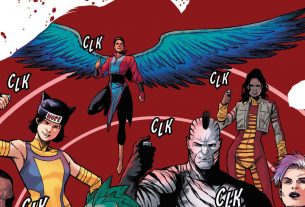