Ray: Tom Taylor, the writer of Detective Comics #1017, will be reinventing Suicide Squad shortly, but it puzzles me that he’s never been given a headline run on one of the biggest DC characters. Whenever he writes them in alternate universes or one-shot stories like this issue, he proves he has a better handle on Batman and Superman than almost anyone. He had me from the first page of “Orphans” in Detective Comics #17 with an iconic scene that resolves one of my biggest ongoing issues with the franchise – the ignoring of Bruce’s mother’s influence on him. While Thomas gave Bruce the business foundation and steely core he needs as Batman, it was his Jewish mother from a middle-class background who instilled in him the compassion he needs to be the hero he is today. A scene where she takes him to visit one of her orphanages has clearly stuck with him till today, and the modern-day mystery of an escaped boy from one of Martha Wayne’s facilities is clearly one that Bruce takes more personally than the average missing child.

Taylor also gives us our first preview of the post-City of Bane status quo for Batman, and it’s a darker, more intense Batman. Lucius Fox is now fully involved in Batman’s affairs, serving in the role Alfred used to, but their relationship isn’t nearly as smooth as that one was. Bruce and Damian have become more estranged, with Damian’s resentment over Batman’s distance being very clear.

Batman and Damian bickering is nothing new, but there’s a rawness to these scenes that feels much more genuine than usually. They put their differences aside to search for the boy, and it builds to a harrowing conclusion and a dark reveal of what Bruce’s relative absence from his civilian life has done to his mother’s legacy. This isn’t a plot-heavy issue, but it wrings some fantastic tension out of showing us what goes on in Gotham every night under Batman’s nose. But it ends on a hopeful note that shows us that maybe, just maybe, Superman isn’t the only DC hero bringing his two lives more in sync lately.

Corrina: Everything I read by Tom Taylor has an emotional punch and Detective Comics #1017 is no exception.

In particular, it’s the sequence between Bruce and the teen who’s run from the orphanage in the Batmobile, as young Miguel is trying to explain what happened and how he’s trying to help others. There’s so much raw emotion seeping into that page, as Taylor and Blanco draw from Bruce’s own past to help him identify with Miguel. The explicit statement is that Miguel is as much a hero, perhaps more, than Batman himself.

I like the elements this story draws on, particularly on Martha Wayne’s appearance, but I most like the fact that Bruce Wayne, philanthropist and businessman seems to be making an appearance again. I know most people see Bruce as the mask but that’s not completely true. The compassion in Batman comes from Bruce and now we see that much of that compassion comes from his mother. Bruce isn’t a mask, unless he’s playing useless playboy.

It’s an iconic Batman story. A repressed Batman is struggling with grief but Taylor lets us see his pain and sorrow clearly, creating empathy rather than distance. I could wish this story’s conclusion helps Bruce and Damian reconnect. But Taylor isn’t the regular writer so, likely not, given what DC has done with Damian in Teen Titans. That’s too bad because their father and son relationship has not been explored nearly enough. 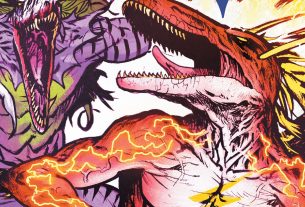 Review – The Jurassic League #5: The Rise of Darkyloseid