Ray: It’s confirmed now – with Deathstroke #48, we’re in the very last act of Priest’s epic fifty-issue superhero film noir via this Deathstroke run, with only two issues left after this brutal barn-burner of a thriller. When we last left off, the ongoing plot over the death of Deathstroke was resolved with his return – in more ways than one.

Two Deathstrokes emerged – a young one working undercover in the medical field, and a brutal, wizened one targeting everyone Slade was close to. We saw the apparent death of Rose’s hacker husband Hosun as this Slade hunted his children – but this issue is mostly about the other Slade, who is laying low with old frenemies as he plots his next move. Morally ambiguous PI Dabney and African dictator/supervillain Red Lion have both been in the background of this series, and it makes sense that Slade is going to them when he needs to stay under the radar. It’s amazing just how much tension Priest can wring out of a scene of three middle-aged men talking at a trailer park.

The old, evil Slade isn’t slowing down at all, making one strike after another, and his family members are moving fast to stay alive. Jericho’s become increasingly unstable thanks to Luthor’s gift and wants it out of him, while Slade wants what he sees as rightfully his. That sets up a collision course, as Rose seeks out Jericho’s boyfriend/hostage to try to protect him from retaliation. While this alternate Slade is the main villain of the piece, I don’t recall the last time a descent into darkness was handled in this creepy a fashion. Jericho’s descent into madness, essentially turning his lover’s own brain against him, is a far creepier use of the brainwashing trope than was done in the recent Trickster arc in The Flash. This is a DCU title that makes good use of continuity, but it’s a very human story at its core and that’s its biggest strength. Not everyone makes it out of this issue alive, and I’m guessing more tragedy is to come as we rocket towards the end. 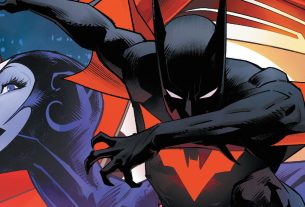