October is here, and you know what that means: time to break out the monsters, ghosts, and ghouls at game night! (Okay, sure, some of you are playing those year-round anyway…) Here’s a list of thirteen titles to help send shivers up your spine!

What would Halloween be without a haunted house? In Vast: The Mysterious Manor, one player can even be the haunted house! This stand-alone sequel to the wildly asymmetric Vast: The Crystal Caverns introduces a Paladin, a giant spider sorceress, a band of spooky skeletons, and a Warlock, all running around in a mansion populated by poltergeists. You can read my original Kickstarter review here. (JL)

In this fast set-collection game, each player is a mad scientist sending out classic b-movie monsters to capture, I mean, recruit mortals for their sinister plans. We’ve reviewed the first edition here. The second edition and expansion add more creatures and mortals to mix into the game with location cards for additional scoring opportunities. Look for a review of the new version next week! (ES)

There’s been a murder! Fortunately for the recently deceased, there’s a house full of paranormal detectives eager to solve this whodunnit. One player is the ghost and must communicate with the detectives using ghostly whispers, tarot cards, and other mysterious means, while the others try to piece together the clues and solve the mystery. This one will be available on October 24! (JL)

Monster Misfits from Monster Misfits is best described as Uno with monsters. A family-friendly game for 2-6 players ages 8+, it plays really fast and is quick to learn. We found that you can play with a kid as young as 6, depending on their gaming experience and it’s a real favorite in our house. Players try to be the first to get rid of their card hands first by being able to dispose of monster-featuring Realm Cards based on their number or type while Chaos Cards threaten to thwart their efforts. Base game and expansion available. (EM)

This game pits a team of friends against a vampire or an axe murderer (there are two versions), trying to rescue a friend in a dark forest. The trick is that the friends can’t see the board: you wear black glasses and navigate by feel, while the hunter watches you stumbling around. It can be a little unnerving to play, and really challenges your spatial perception while you try to build a map in your head and tell your friends what you’re encountering. (JL)

The latest iteration of CMON’s popular Zombicide series takes the franchise into space with Zombicide: Invader. You and your friends play as a team of six survivors, cooperating together to fight off hordes of zombified aliens which are invading your outpost on planet PK-L7. You can read my review here. (PB)

Or if you prefer fantasy instead of sci-fi, Zombicide: Black Plague and Zombicide: Green Horde pit your team of survivors against zombies, necromancers, and undead orcs within a medieval setting. Use swords, bows, and spells to fight your way to victory. You can read my review of Black Plague here. (MP)

Hellboy: The Board Game

Based on Mike Mignola’s Dark Horse comic books, Hellboy: The Board Game from Mantic Games has 1-4 players taking on the roles of B.P.R.D. (Bureau for Paranormal Research and Defense) agents Abe Sapien, Johann Strauss, Liz Sherman, and “Big Red” himself, Hellboy. You’ll work together to defend the world from various monsters, maniacs, and mythical creatures. (PB)

Fans of Welcome To…, the flip-and-fill neighborhood-building game, can celebrate this spooky season with the Halloween thematic neighborhood expansion! The new neighborhood sheets include some houses with ghosts and candy to choose from. Collecting candy can score you bonus points, but collecting ghosts gets you tricks—but each trick or treat can only be chosen once among all the players! (JL) 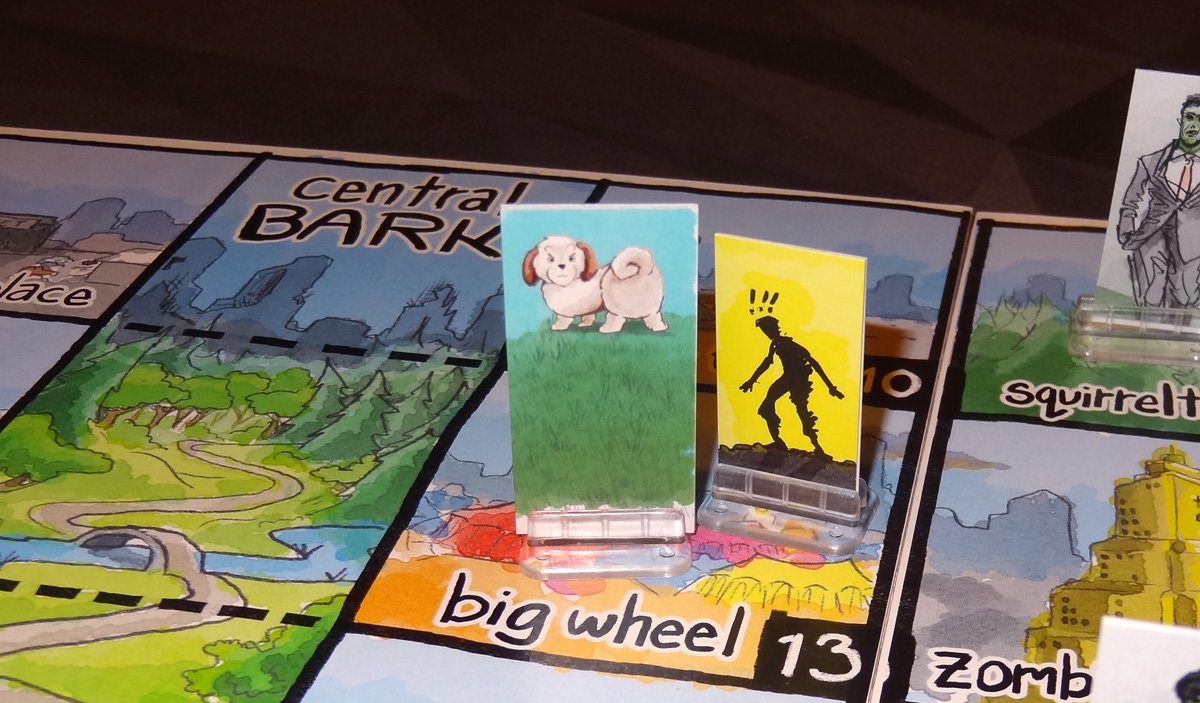 The zombiepocalypse arrived, and the real survivors were the good doggos, who built a home in Central Bark. This cooperative game puts you in the role of the dogs, who seek out the hoomans and bring them back to the park, while fending off zombies and trying not to go feral. It was Kickstarted in early 2018, and is now available for purchase. Read the Kickstarter review here. (JL)

Inspired by actual historical events, The Bloody Inn has you playing as a family of greedy rural farmers running an inn in 19th Century France. And you’ve realized that there may be more profit in killing your guests and robbing them than simply charging them for lodging. But be sure to bury those bodies before the local police find evidence of your crimes! The Bloody Inn is a competitive small box game from Pearl Games, and there’s even an expansion, The Bloody Inn: The Carnies, available to add to the ghoulish fun. (PB)

The Menace Among Us

I’m a big fan of games that involve a traitor aspect, and the sci-fi based Menace promised a fun spin on the game type. In the game, you play a member of a ship that has experienced a catastrophe. The ship must be repaired and power restored before all the oxygen is depleted, but almost every action you take uses up that valuable O2. Actions taken are submitted using cards from various players, but one player doesn’t want the story to end well… and that player will be attempting to sabotage repairs and other actions. The goal is not only to fix the ship but to try to identify the traitor and get them stunned and sent below deck. Look for a more thorough review of the rules and gameplay shortly, but I can highly recommend it as a definite Halloween-suited game! (JK)

Flush those pesky witches out of your brand new town so they don’t cause despair and ruin… or, if you’re a witch, show those holier-than-thou Puritans how selfish and sinful they really are. New Salem is a card-drafting game with hidden roles that keeps suspicions high, and it’s a blast to play. If you already own the base game, now’s a great time to break it out. The second edition with the Constable expansion was Kickstarting last year during Halloween, but now it’s available! (Read the full review here.) (JL)