Ray: We give Bendis a hard time occasionally here at “DC This Week”, but let me tell you – I’ve been reading his comics for close to twenty years, and when he’s on his game on books like Ultimate Spider-Man or Alias, he’s one of the best writers in the business. And I think he’s been slowly building another of his masterpieces in oversized Walmart digests for the last year, and the rest of us are just getting to see it now, especially with Batman Universe #3.

A lot of the credit goes to Nick Derington, who lives every artist’s dream by getting to throw Batman though the most creative locations in the DCU, but Bendis’ dialogue for Batman and his allies is as good as it’s been since he came to DC. When we last left off, Batman had been hurled through space by the mysterious egg sought by Vandal Savage, and winds up on Thanagar where he’s interrogated by the space police. The shift from “intimidating winged shadows” to winged superfans when they find out who he knows is hilarious, and I don’t know if Thanagar has every looked as good as it does here.

Surprisingly, though, the second segment may be even better. After being debriefed on his adventures, Batman sets out in search of the egg once again – this time with Hal Jordan in tow. I don’t know how much Bendis is working with this, but the relationship between Batman and Hal has never been great. From Hal’s evil phase to their general difference in style, it’s always been tense.

Here, Bendis takes a lighter touch and casts Hal as the excitable hotshot to Batman’s cool detective, and it’s a great dynamic. A visit to Dinosaur Island lets Derington show off with some stunning visuals, as he channels his inner Doc Shaner. Derington’s a chameleon and he can draw anything. The ending, which sends them off to their next adventure in time and space, brings in Jonah Hex – an odd pattern of this character appearing in Walmart specials. I have no clue where this is going, but it’s some of the most fun I’ve had reading a DC comic in a while.

Corrina: Just a quick note, because I agree with the bulk of Ray’s review. But, still, the repeated appearances of Jonah Hex, and the creation of his descendant, Ginny Hex, for Young Justice, makes me a bit uneasy, given Jonah is a former Confederate soldier who continues to wear his Confederate uniform in all his appearances.

I understand the story reasons for this, going back to his origins, and that Hex wears it as a reminder of what not to be, but most readers are likely unaware because it hasn’t been referenced in ages, plus, this story was originally intended to reach comic readers outside the regular fanbase.

And many of those new readers from the Walmart digests will simply see a DC hero dressed in the uniform of the Confederate States of America, a nation that fought to preserve slavery. 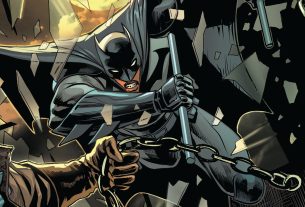 DC This Week Roundup – Heroes on the Brink

1 thought on “Review – Batman Universe #3: Through Space and Time”