Today’s Stack Overflow is all about music! These are mostly picture books (with one graphic novel for adults at the end), with non-fiction and fiction combined. Fiddling dogs, inventing guitars, playing cello to the moon—if you love music, you’ll love the way it’s depicted in these books! 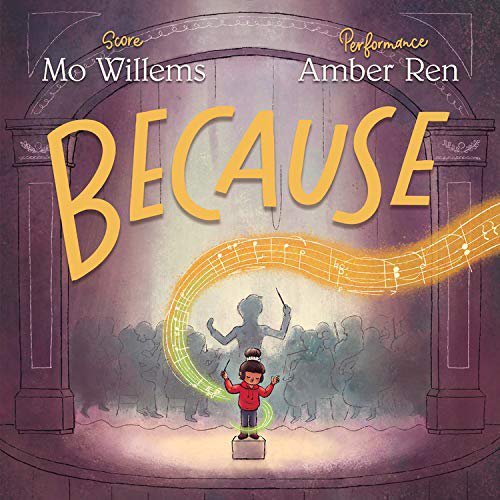 Because by Mo Willems, illustrated by Amber Ren

This lovely picture book shows the power of music at work, linking composers to musicians to the audience to more music. “Because a man named Ludwig wrote beautiful music—” the book begins, “a man named Franz was inspired to create his own.” From there, various musicians form an orchestra to perform Franz Schubert’s symphony, theater workers prepare the theater for the performance, and one young girl attends the show because her uncle is too sick to go … and eventually performs her own music at the same concert hall. The endpapers include the score for Schubert’s “Symphony no. 8 in B-minor,” and also “The Cold,” composed by a young woman composer named Hilary Purrington for this book. You can hear the song in the background of this book trailer: 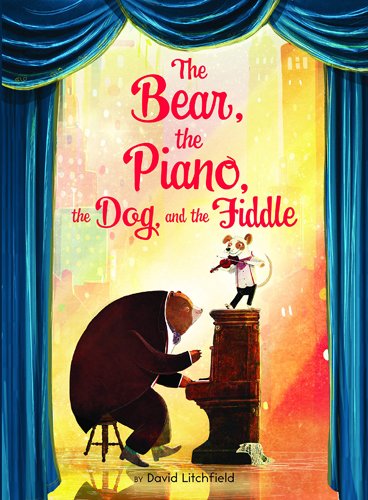 The Bear, the Piano, the Dog, and the Fiddle by David Litchfield

This is a book about friendship, about envy, about pride, and about healing. Hector is a fiddler and Hugo is his faithful dog (and also his biggest fan). But when a piano-playing bear becomes famous, Hector gives up—he can’t compete—and puts away his fiddle forever. But Hugo has always loved the fiddle, and when Hector stops playing, he starts, and Hugo finds a second life as a teacher … until the bear invites Hugo to join his big band.

The book does a great job of showing the difficulty between being happy for your friend’s success and being bitter about your own situation. This is the sort of thing that can tear friendships apart: but Hector and Hugo do end up with a sweet, surprising happy ending.

Harriet Henry—call her “Hank”—plays the cello, but she has no interest in playing in a big orchestra or for a big crowd. She just wants to play for herself. A funny accident during practice one day results in the moon—call him “Mister Moon”—getting stuck in her chimney, and she ends up spending some time getting to know him and showing him around. And, eventually, playing music for him.

The story is beautifully and imaginatively illustrated: Hank imagines her parents as penguins, and the various shopkeepers around town are also animals. She carts Mister Moon around in a wagon, and gets him a hat for when it’s chilly up in the sky. It’s a fun story about how not everyone needs fame and a big stage to enjoy making music.

I’ll admit I wasn’t familiar with Laurie Berkner’s music before this book, but she creates music for kids, including the song “Pillowland.” It’s about a magical place that is, as you might guess, full of pillows: pillow trains, pillow cars, pillow dinnerware, and so on. This picture book is an illustrated version of the song, and includes the sheet music on the back cover (under the dust jacket).

I’d heard the name “Les Paul” before, but aside from associating the name with electric guitars, I didn’t really know much more about the man behind the name. Well, the title of this picture book really undersells it, in my opinion: not only did Les Paul build himself an electric guitar, he made his own microphone stand, invented a harmonica stand so he could play harmonica and guitar at the same time, and pioneered multitrack recording, among other things. All this from a kid who was told by his music teacher that he had no musical talent.

The book condenses his life down to mostly highlights, with a focus on why young Lester was interested in an electric guitar, and how the various things he invented along the way were just continuing to build a way to play his music to the folks in the way back of the audience. Tomsic’s writing is filled with fun sound effects, and Helquist’s art makes the music visible. It’s an excellent combination, and a cool story about how persistence (and an encouraging mom!) helped Lester Polsfuss become Les Paul, who helped make music sound the way it does today.

This picture book biography of Elvis traces his meteoric rise from a shy, dirt-poor kid to the King of Rock and Roll. Jonah Winter sprinkles a lot of Southern dialect throughout the telling of the story to reflect Elvis’s country-boy upbringing, and his story captures both the fear and the excitement Elvis experienced while starting up his music career.

The artwork is by the amazing Red Nose Studio (aka Chris Sickels), who creates puppets and props and scenery and then photographs the 3D scenes. (His work also appeared in The Secret Subway, mentioned in this Stack Overflow.) The photos look like stills from a stop-motion animation film, and really help bring the story to life. Be sure to check the inside of the dust jacket, which gives a peek behind the creation of the images.

Winter’s author’s note at the back gives a little more background behind Elvis, acknowledging that a lot of his success was from being a white boy who could sing “black music” for white teenagers at a time when segregation prevented many black musicians from achieving the same level of success. That, combined with his musical talent, good looks, and shaking hips, were a formula for rock-and-roll fame that is hard to beat.

The school talent show is coming up, and one girl is contemplating what to do. She doesn’t play a guitar or a keyboard, but she has a rock ‘n’ roll soul. Music fills her body and her mind: she’s tuned in to the rhythms and sounds all around her, from a handful of pebbles to the rain on the roof. This rhyming verse celebrates a girl who doesn’t need anything else, because, as she says: “My greatest instrument is … ME.” It’s a fun book about finding (and making) the music in everyday life.

So Many Sounds by Tim McCanna, illustrated by Andy J. Miller

In a similar vein as Rock ‘n’ Roll Soul, this book also finds joy in the various sounds surrounding a kid from breakfast to bedtime. Most of it isn’t technically music, but there’s a music in the rhyming descriptions of the sounds of life all around: a teapot whistling, a zipper zipping, kids on a field trip, noises of a construction zone, all the way until the quiet of bedtime. 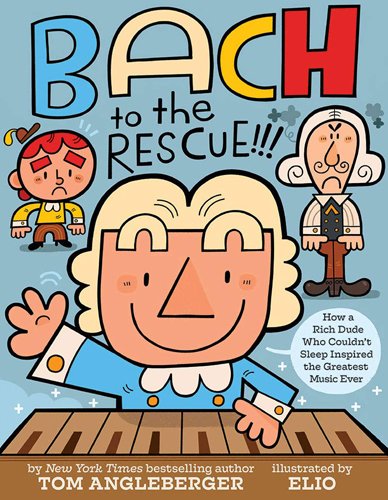 Bach to the Rescue!! by Tom Angleberger, illustrated by Elio

This is a very silly retelling of how the Goldberg Variations were created by J.S. Bach, loosely based on a story that may or may not be true. As the subtitle says, a “rich dude who couldn’t sleep” kept pestering his private musician, Goldberg, for a song that would be interesting enough that he didn’t mind being awake, because lullabies just didn’t work for him. Eventually, Goldberg sought out Bach’s help, who created 31 variations on a theme, finally pleasing the rich dude (and getting very well rewarded for his efforts). The story is narrated by Bach himself, who is pretty full of himself and a bit silly as well.

Showtime at the Apollo: The Epic Tale of Harlem’s Legendary Theater by Ted Fox, illustrated by James Otis Smith

The Apollo is a theater in Harlem with an amazing history, and it played a significant role in music in America. For many Black musicians, the Apollo served as a proving ground, with a tough audience that could make or break careers. It was also one of the few places where African Americans could go to watch musicians perform, because even theaters that hired Black musicians were often segregated.

Ted Fox’s Showtime at the Apollo, originally published in 1983, drew from a variety of publications and personal interviews with many of the people who were involved with the theater. This book is a graphic novel adaptation, and traces the history of the Apollo through its many changes and transitions, told through the voices of performers and showrunners and the theater’s owners. The cast is incredible, and the story is enthralling.

My only complaint is that the layout of the panels and captions is often very confusing—and I’m not new to reading comics, either. The panels are usually laid out in grid, but there aren’t a lot of gutters between rows, which means you can’t always tell if a caption goes with the panel above it or the panel below it. This was consistently true throughout the book. Still, if you want a broad overview of African American music—and how the Apollo made so much of it possible—this is a great read.

I haven’t read as much this week, other than wrapping up Showtime at the Apollo, because I’ve been getting ready for a local tabletop game convention, so it’s mostly been reading rulebooks. Happy reading, everyone!

Disclosure: I received review copies of the books covered in this column. 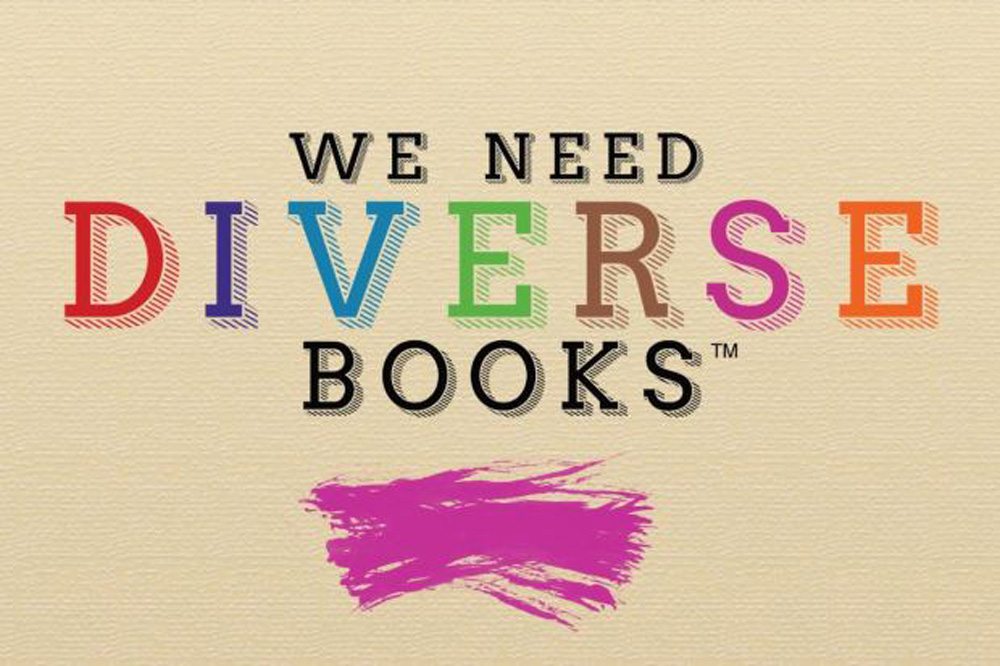