Ray: The Bendis plan for Young Justice, reintroducing its young heroes one at a time in backup stories mixed in with the main narrative after throwing them all together in the first issue, continues this issue with the most mysterious of the “big four”. That would be Conner Kent, who has not been seen in any real form since the New 52 and whose whereabouts were a complete mystery. When we saw him last, he was sporting a new beard and leather jacket and had just been reunited with his best friend Bart. Bart’s rapid-fire questioning of Conner is great – is there a character Bendis was born to write more than Impulse? – but things take a dark turn when they’re attacked by a soldier of Dark Opal. Rather than fight back, Conner opts to surrender and both of them are captured. Whatever Conner’s been up to in Gemworld, it’s affected him deeply and he’s a far more serious character than he was when we left off. And that is what plays out in Young Justice #3‘s flashback.

Superboy is definitely the most tricky character to work with out of the four, as Bendis not only has to bring him back, he has to reconcile the two versions of the character – the rebellious 90s surfer kid from his 100-issue solo series, and the humble farmboy and protege of Superman’s from the Johns run. I think he does a good job – this Superboy goes to Smallville High (although that raises the question of where he’s been living if the Kents died young in the New 52 continuity), but he also has an edgier streak and does not go along well with authority. That leads him to disaster when he pokes too far into a secret government facility and a mysterious monster, ending with him trapped in Gemworld. And as the cliffhanger this issue reveals, he’s gone through some massive changes since then and Jon may not have been the only Superboy to go through a maturity spurt. The last scene, a rapid-fire round of dialogue between the captured young heroes, is a perfect Bendis scene. But I’m getting ready for some more interaction with the whole gang.

Corrina: This seems like Conner from his original 100-issue run, rather than the Johns0run Superboy. That’s a good thing, as that Conner was big and bold and flashy and fun. Having him be a resident of Gemworld is a decent way to bring him back from limbo, and I begin to see why Bendis picked this setting.

The art team has some fine moments in this issue. First, there’s the ever-moving Impulse in his questioning of Conner. Second, the team as prisoners is great. While the scene is static, the panels are of the various members of the team stuck in their own, well, dungeon holes. The lettering makes all the difference there, with the lighter word balloons hovering over the darker, murkier sewer grates.

So…does this issues development make Superman a grandfather now? I’m not for introducing a baby into the narrative, by the way, because even if it’s good for storytelling for a while, things inevitably end badly. See: Lian. See: Jon Kent himself, now aged up. See: the forgotten Helena Kyle baby that was several reboots ago. And even Sin, good as she was in Birds of Prey, completely vanished.

But aside from that, excellent issue. This is the one Bendis title that I am enjoying. 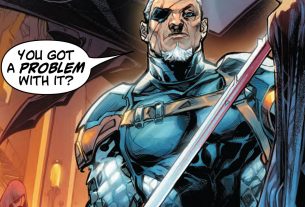