Corrina: So, Lois and Batman Walk Into a Room. And…Talk.

Ray: Coming off the excellent Superman: Leviathan Rising, I was intrigued by how the first issue of Brian Michael Bendis’ first official event comic for DC would be. After reading it – well, it’s very much a Bendis comic. In fact, it’s probably the most Bendis Bendis comic I’ve read in a long time. The prelude system took us around the world, while this first issue takes place almost entirely in a single room – a locked-room mystery focusing on four of the smartest detectives in the DCU. It opens with Batman investigating a destroyed facility – what was once the secret new headquarters of ARGUS. But he’s not the only one there – Lois Lane has infiltrated the building as well, and the first few pages are just Batman and Lois bantering back and forth. This is the most active and dynamic Bendis has written Lois so far, but the dialogue is a bit too quippy for these two characters. As they compare information and make clear that they don’t exactly trust each other, they discover they haven’t been alone the whole time.

Steve Trevor, the powerhouse of ARGUS, isn’t exactly what I’d expect from a top detective, but he’s seen stuff. A tense flashback segment – pretty much the only action in this issue – shows Trevor desperately trying to evacuate the building before the mysterious alien destroyer shows up. He fails, watching his newest hire – the brilliant and unpredictable Doctor Strand – seemingly meet her end before his eyes. Trevor is clearly unbalanced and distrusts everyone, but that sets up the entry of our fourth major player – Green Arrow. Ollie is probably the weak link here, shooting first and asking questions later, but that’s pretty regular for him. An aside featuring Leviathan does a good job of setting up what the mystery villain’s goals are – they seem to be a utopia of sorts, which sets them apart from the ringleaders of “Year of the Villain”. Overall, this is a ridiculously talky first issue, but the dialogue is compelling and the mystery is strong. This needs to pick up its pace in future issues, but for the first issue, I’m intrigued.

Just for fun, I decided to count the number of times the four people in this comic say “Talia” and mention her in connection to Leviathan, mostly that she can’t be Leviathan. The answer? Ten times. And at least half of those are basically the same comment about not being able to trust her and it not feeling like her plan. I get it. Talia’s involved but she’s not Leviathan. I got it the first four times.

That’s my long-winded way of saying little happens this issue. Bendis is known for decompressed stories that pay off but this is as decompressed as any of his work that I’ve ever read. There are also character issues. For once, I have no complaints about Lois. Or even Batman. But it’s Steve Trevor, even traumatized, that makes no sense. He’s always been more of a soldier than a spy, and his striking out at Lois is an odd choice, to say the least, for Steve, even with what happened. And what Green Arrow is doing in the middle of this, I have no idea.

The one person who says nothing but makes the most sense is the Question. I’d be on board for a Question series where he stalks people silently and uncovers the truth behind this mess.

However, while the story is paper-thin, the art almost manages to compensate. As you can see in the pages above, the colors are muted, dark, in the ruins of the facility, giving the perfect feel of paranoia. Contrasted to this darkness are the light, bright pages of what has gone before, especially with Doctor Brand, and her segment at the end is also brightly colored, save for the appearance of Leviathan.

As to Leviathan’s identity, he reminds me strongly of Anarky, so that’s an outside-the-box choice. But, mostly, he reminds me of the artificially intelligent Samaritan from Person of Interest, who wants to dispassionately cleanse and fix the world. Which means this makes Batman as Reese, Lois as Finch, Root as the Question, and the confused Trevor as Shaw. But I doubt this time they’ll have an ally like the Machine. 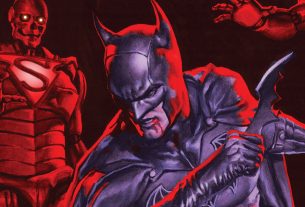