Ray: With only one issue left until the grand finale of Damage, I’ve largely given up on this series giving us any satisfying resolution to Ethan Avery’s story and his battle with the monster lurking inside him. There’s just no there there, but what surrounds him tends to be fitfully amusing – and in this final arc, more than fitfully.

Of all the weird situations our roving man-monster has found himself in, hanging out on Monster Island with Congo Bill is definitely one of the better ones. As Damage #15 opens, Ethan is powerless and running from a band of monsters including DC staples Shaggy Man and Oggro. Aaron Lopresti is clearly having a lot of fun drawing classic DC monsters, and Congo Bill is one of the oddest, most entertaining characters in DC’s stable. He’s just a crazy Scotsman who is always ready to box a monster and occasionally turns into a giant golden ape. Could Ethan have a better mentor in being a monster?

But the question for Ethan is – does he want to be a monster? Does he want to control Damage, or does he want to be rid of him? After an initial fight with Bill where Bill quickly dispatches him, Ethan agrees to play it Bill’s way. Bill teaches him to keep Damage bottled up – something that gets much trickier when a new threat appears. Between the standard monsters and the giant kraken deputized outside the island by Aquaman, now a new monster has shown up – a horrific hybrid of three of Bill’s charges, created by Echidna, the Mother of Monsters. It’s odd to see a classic ancient Greek villain showing up here, given how much work G. Willow Wilson is doing with them now. There’s very little substance here, but Aaron Lopresti is clearly having the time of his life drawing monsters and Congo Bill is an appealing co-lead. It’s just a shame that to the end, Damage is the least interesting part of his own series. 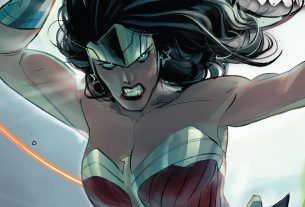 Review – DC vs. Vampires #3: A Predator in the Midst 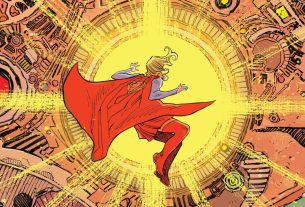