As the Associates settled down for the night in the empty tent, they looked around. It was far bigger than they remembered and without the sound of music and dancing it seemed forlorn and desperate. No smoke poured out from the hole in roof and they decided not to set a fire. They didn’t talk much. They were all thinking about what Savid had told them and were worried what they might find when they reached Vallaki.

D&D campaign and we finally made it to Castle Ravenloft. But before we got there we had one last stop in Vallaki to see how things had been since our last visit.

Our heroes are stuck in Barovia. The only way to escape is to defeat the evil vampire overlord Strahd von Zarovich. After many misadventures they have found allies and weapons to do so, and now find themselves heading for Castle Ravenloft, the eponymous vampire’s lair.

But before they get there they have to make one final stop in Vallaki, a town they have twice freed from the tyrannical rule of a mad leader only for an even madder, more corrupt one to take their place. Last session they rested at the abandoned Vistani camp and heard from Savid the dusk elf that Vallaki was in turmoil and their friend Blinsky may need their help. Last session we eventually made it to the gates of Vallaki.

The ominous tall walls that surrounded the small town loomed over them as they approached Vallaki. Dark and foreboding, they held memories of bargained access and creeping. Two times the Associates had entered Vallaki previously, both through bribery and deceit. This time, as they crossed the threshold there were no guards or gates to stop them.

We started the session making our way into the familiar town. We had heard from Savid that the place was in ruin and he was right. Apparently Lavash and some of his Vistani kin had rampaged through the town seeking vengeance for his lost daughter. Although they couldn’t take all the credit.

Indeed most of the houses and building we passed that were boarded up or in a state of disrepair could be blamed on us. We recognized the remains of the coffin maker’s shop, still ruined from one of our first encounters with vampires. Then we passed the crumbling mansion of Burgomaster Vargos, again ruined in part due to us. Passing through Vallaki we saw the remnants of the Church District, which we accidentally burnt this down after a fight with Strahd. And finally we came to the Wachta mansion; although still standing, this was boarded up and clearly abandoned since we dealt with Lady Wachta on our last trip here.

We were starting to feel bad about the state of the town—surely it couldn’t be all our fault?

Walking the deserted streets of Vallaki we occasionally spotted people staring out from windows or silently standing in doorways. We approached one man who just stared at us blankly. This reminded me of a dream Baräsh had in an earlier session, where he was the savior of Baroiva but also cursed by darkness. I asked our DM afterwards if this was intentional. It wasn’t. Somethings just work out that way I guess.

Baräsh and Brundle tried to cheer up the man by juggling inside a magic circle. Victor contributed to the scene using his Prestidigitation to add sparkles and Gimble created a minor illusion of a spider wearing a hat. None of this worked. The man stared vacantly, impassively until we eventually gave up and moved on.

As we reached the center of Vallaki there started to be a few more people about. None of the wanted to talk to us. We were heading for the Blue Water Inn when we spotted a commotion ahead. A group of people, gathered around a large wooden scaffold. They talked in hush tones and withdrew as we approached. As they did they revealed three cages hanging from the scaffold, each held a figure inside.

Inside the first cage was a man, badly mutilated. He had a crudely made sign hanging around his neck with the word MUDDERA scrawled on it. The man had been beaten and butchered. Baräsh instinctively offered up some healing, just enough for him to speak. He was called Ludo and had been accused of murdering Arabelle, Lavash’s daughter. He didn’t deny it. He was mortally wounded so we gave him the option of ending his suffering. He accepted and Kosef put him out of his misery.

The second cage held a motionless corpse and a live chicken. Flies buzzed around the body and we didn’t recognize the chicken so we ignored them both.

Blinsky was in the third cage, beaten, but not as badly as the others. We quickly went to his aid. Ireena offered healing as Baräsh attempted to break the padlock. He only rolled nine of his strength check and failed to bust the lock. His second attempt was more successful and the cage door swung open as the bolt fell to the ground. Behind him Kosef quietly put away his thieves’ tools. Kosef has been in the party for nearly 60 sessions and still no one remembers he’s a thief.

Having rescued Blinsky, we took him to his warehouse. Apparently he tried to speak up against the Vistani who were rampaging through the town and was beaten for his bravery. His shop had been destroyed in the recent chaos so he has been working from his small store room. What’s worse, his pet monkey Piccolo was nowhere to be seen. Poor Blinsky.

His tiny workshop was a mess of half-made toys and rusty tools. But amongst the disorder there hung five pristine tailored suits on the wall. Blinksy motioned towards them, “These are for you. Just like you ordered.” It was true, the last time we were here, before everything went south with Lady Wachta and Strahd we had visited Blinksy, and he owed us a favor. We knew there was going to be a wedding (Strahd was due to marry Ireena before we saved her from that fate) and decided we should at least look our best.

The five suits were a perfect fit and each was adorned with an individual design. Kosef’s had bats on the arms; Baräsh’s had flames along the collar and cuffs; Brundle’s had autumn leaves and worms woven into it; Gimble’s was made to look like a skeleton; and Victor’s had skulls on the back. Ireena didn’t have a suit, “Wedding dresses are a bit much for me,” Blinsky hopped from one foot to the other, “and I get uncomfortable taking a lady’s inside leg.”

After the suits we asked Blinsky for any information he could give us. No one had seen Van Richten since the battle with Strahd; Esmerelda was spotted looking for him a few days ago; Blinsky hadn’t been able to fix Henry the modron. There wasn’t anything else he could tell us.

Blinsky also said that he wanted Victor to become the new burgomaster of Vallaki. We agreed that he could, but only once Strahd had been dealt with. Victor wasn’t keen, but didn’t care enough to argue.

Having done all we needed to in Vallaki, we decided to head straight to Ravenloft. It was less than a day’s travel and we could reach the gates by night. We were starting to get nervous now. The thought of actually going into Strahd’s lair was quite intimidating. And it also meant that we were coming closer to the end of the campaign.

The heroes made their way along the Old Svalic Road, their thoughts filled with thoughts of dread and fear. Every sight was an omen. The Old Bone Grinder with its broken windmill blades motionless in the breeze made them shiver. Eventually they reached the gate tower and looked beyond to the Castle. It seemed boastful, sneering at them through the rain. Thunder rolled loudly through the sky as they crossed the old stone bridge. This was Strahd’s domain. His home. And they had come to face him. END

This was another fun session that was entirely roleplay; the only time any dice were rolled was to fail to impress a gawping Villakian and to unnecessarily smash a padlock.

However, I think from here on in things are going to get a bit more dangerous. If we ever get inside Castle Ravenloft that is.

This was also a fairly long session, lasting just over three hours. Mostly this was due to the fact that we spent a long time trying to guess what the password to raise a portcullis in the castle grounds. Eventually we gave up and decided to try the front door.

DM Tip: Sometimes things just work out really well. Our DM had no intention of our arrival at Vallaki mirroring an earlier scene from Baräsh’s dream, but coincidentally it did. We all thought this was really clever and were very impressed at this narrative flourish. Of course it was a total accident and pure luck. But that doesn’t matter. You can plan for things like this and your players might never notice. But if this does happen purely by chance be sure to take the credit for it and you’ll look super clever.

Player Tip: Remember to give other players a chance to take the limelight. It can be hard, especially if you’ve thought of something you think is a really good idea, but it might mean that you get to do things you wouldn’t otherwise do, or that other players get to do what you normally do. I find that often I take the lead when investigating or exploring so this session I consciously let the others do that.

Next week we go inside Castle Ravenloft. It’s strange to think that the previous 70 sessions have all been leading to this. But the castle is huge and the campaign is about to go from open world exploration to deep, dark dungeon crawling. Unless Strahd is waiting for us at the front door that is. 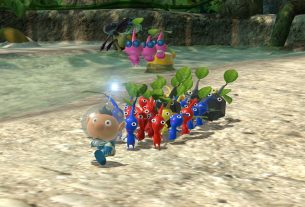 ‘Pikmin 3 Deluxe’ Is (Still) Out of This World