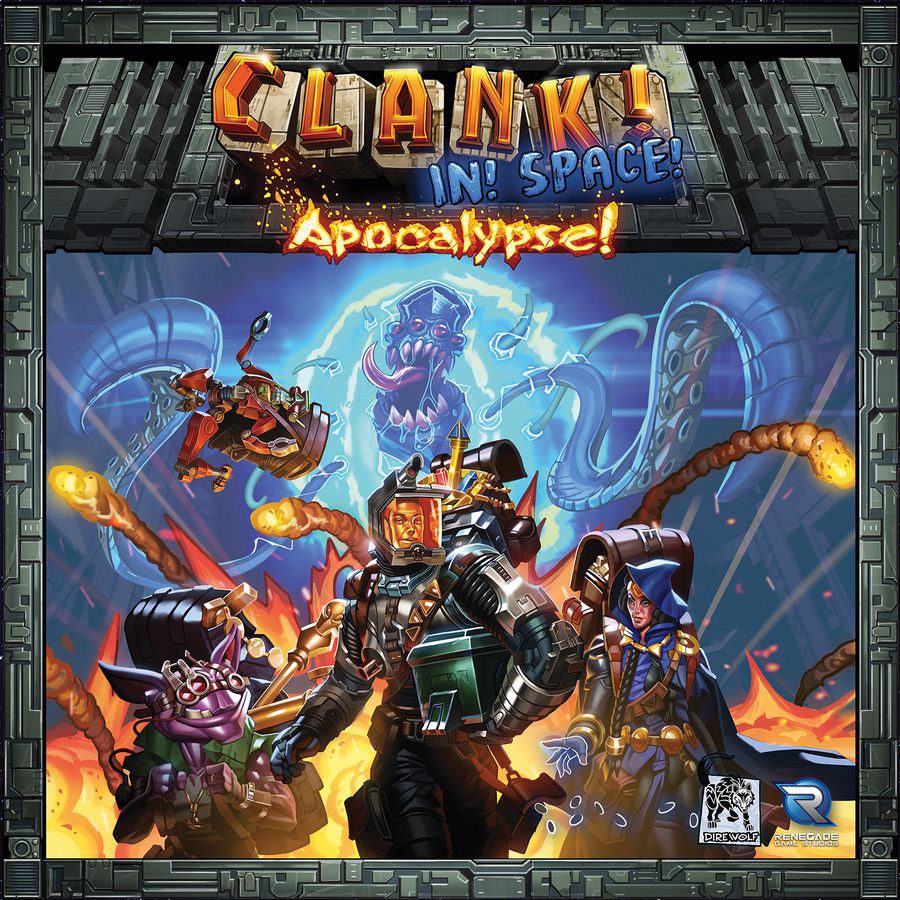 Lord Eradikus has put his schemes in place to wipe out the Resistance. Can you stop his grand plans—or at least grab some loot before the apocalypse?

What Is Clank! In! Space! Apocalypse!?

Clank! In! Space! Apocalypse! is the first expansion to Clank! In! Space! for 2 to 4 players, ages 13 and up, and takes about 45–90 minutes to play. It’s available now in stores, directly from Renegade Games, or on Amazon, with a retail price of $25. It does raise the stakes a little, but if you’re familiar with the base game, you shouldn’t have trouble with this expansion; I’ve played it with my 11-year-old (who had played Clank! In! Space! when she was 10).

The module boards are double-sided (as in the original), with different layouts to mix up the map each time you play. For the most part, things will look familiar, though there are some spaces with a black cube icon that I’ll explain in the “How to Play” section.

Adventure deck cards are like the originals—they get mixed into the base game deck and include a variety of card types like monsters, companions, programs, and items. The cards have a small diamond icon in the background of the effects area so that you can separate them out if desired. As with the base game, there are plenty of references, and the flavor text is often quite entertaining.

The scheme cards are oversized cards, each with a bit of flavor text and three phases. They come in three difficulty levels, and include lots of references to sci-fi stories like Terminator and Spaceballs, along with what seems to be a reference to Pandemic.

The Haldos boss marker may be used in place of the Lord Eradikus boss marker if you like, but doesn’t have any special game effects. One of the schemes is the Homicidal AI, so Haldos is particularly appropriate then.

How to Play Clank! In! Space! Apocalypse!

You can download a copy of the rulebook here. Since Apocalypse! is an expansion, I’ll presume knowledge of the base game and just go over what’s new; if you’re not familiar with it already, check out my original Clank! In! Space! review here.

During setup, you’ll select one of the scheme cards to use; set it near the board, and return the rest to the box. Shuffle the new adventure deck cards into the main deck. Some scheme cards will reference a particular module—if so, it’s best to include that module in the map, but otherwise, you may use a random mix.

Any time a black cube is drawn from the bag for a boss attack, set it onto the scheme card, starting at the top and filling in from left to right. If a section is filled in, then the printed effect happens immediately, and those cubes are now locked into place. The last effect on each scheme card is an ongoing effect that will last the rest of the game.

That’s basically all of the new changes—there are some more specifics about removing cubes, and there are new abilities on cards, but for the most part, everything is easily understood as you encounter it.

The game ends as usual, when everyone is either out or dead. Black cubes remaining in your supply are worth 1 point each.

Why You Should Play Clank! In! Space! Apocalypse!

The first time I played Clank! In! Space! was at Gen Con 2017, when Renegade Games and Direwolf Digital surprised everyone with the announcement. We borrowed a copy for our Gaming with GeekDad event, and four of us sat down to give it a try… and we all died before escaping. None of us even made it as far as the cargo bay, so we didn’t even score any points. It felt brutal and difficult, but we still had fun. Since then, I’ve gotten much better at it, though we still often have at least one player who doesn’t make it back to the cargo bay before time runs out.

Clank! In! Space! Apocalypse! ramps up that tension again without too much added complexity. The new ruleset is short, and the schemes are easy to understand—though foiling them can be difficult. Now, you have to decide whether it’s worth spending resources to get black cubes and slow down the scheme, or to use those resources toward movement, buying cards, fighting off enemies, etc. In some instances, there may even be players who want to advance a scheme, at least partially. For instance, the second phase of the Atmosphere Theft scheme will let every player with contraband draw two cards. If you have contraband, you might not mind. On the other hand, once the third phase triggers, it slows down everyone’s movement, so if you let phase 2 reach completion too soon, it might cost you dearly later in the game.

So far I’ve only played with a few of the different schemes, but I really like what they add to the game and the way that it introduces a bit of semi-cooperation to Clank! In! Space! There are times when everyone is scared of the effect, so everyone is taking black cubes as much as possible, which means that the scheme might not trigger at all. On the other hand, I had one game in which the whole card filled up rapidly because we had a few of the “draw an extra cube” cards in the marketplace, and things escalated out of control before we expected it.

The new modules provide a little more variety, changing up the paths available through the ship. I made a crucial error in one game because I wasn’t paying attention to the locations of locks and security checkpoints when planning out my escape, and I like that I’ll have to find my way around some new locations. The new spaces let you spend black cubes to heal, draw cards, get money, or other benefits, so you can decide whether it’s worth spending a point to take the action.

The variety of new cards is fun, too. There are now Science prisoners (the green faction), where in the base game all of them were from the Resistance faction (purple). There’s also a mix of new characters, including several that can use the black cubes and even one that lets you steal black cubes from the bag—at your own risk, of course.

As with any rotating-market deck-building game, the large adventure deck means that you won’t always see the same mix of cards, which means that you won’t always see a lot of the new content just because you shuffled the cards into the deck. The scheme cards are always present, of course, but it may be a while before you’ve seen all of the new cards in regular play, which is a shame. Still, it means you’ve got more to look forward to later!

In short: if you’re a fan of Clank! In! Space!, you’ll probably enjoy what Apocalypse! adds to the game. If, on the other hand, you prefer classic Clank! because the space version was a bit too fiddly, then you’ll probably want to steer clear. 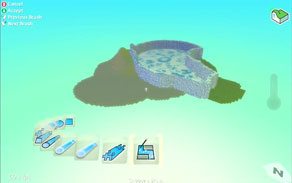 2 thoughts on “‘Clank! In! Space! Apocalypse!’: A Scheme Come True”