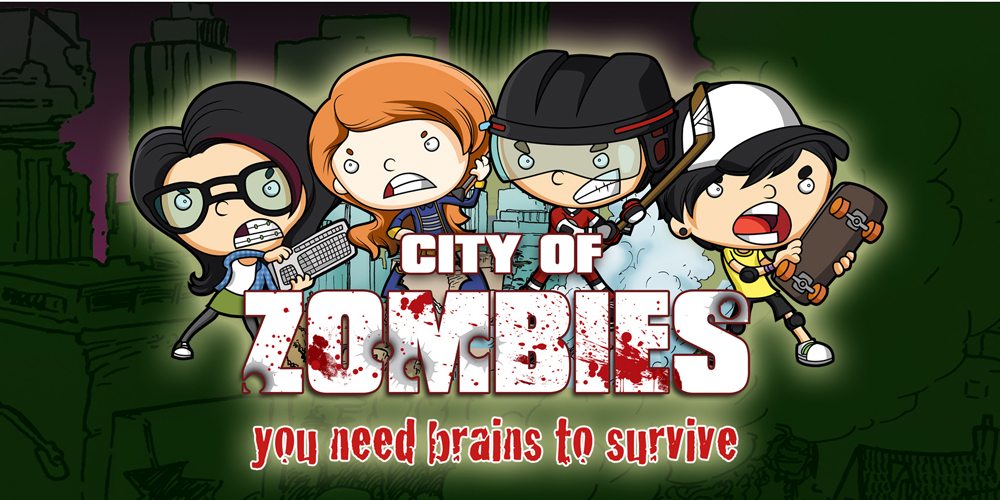 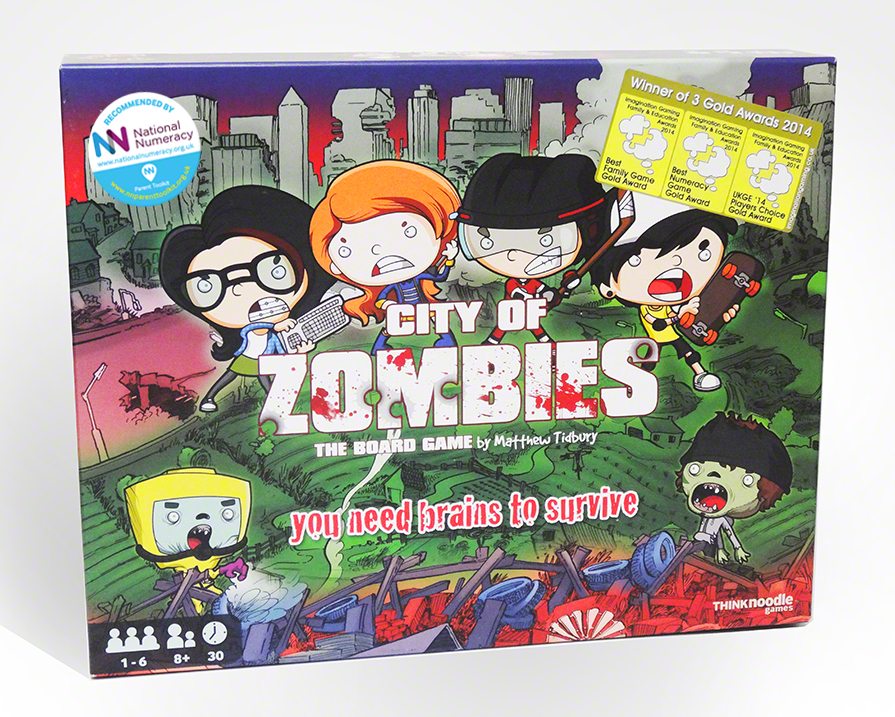 One of the best things to arrive in our house in the last few months is City of Zombies from THINKnoodle games. British designer Matthew Tidbury was inspired by his children to invent the game. His vision was to create something fun and intuitive to help children learn math. He realized that vision with this dice-based, Day of the Dead-channelling board game.

City of Zombies is collaborative; together you defend the barricades protecting the city from an undead incursion. A plane will arrive to pluck you to safety, but only if you survive long enough for it to reach you. The secret to halting the zombie threat? Mental arithmetic. It’s time to use your brains or have them eaten.

Play starts with the defenders (1-6 players) manning the barricade. The zombies start at the top of the board and after each round shuffle downwards towards their dinner. That’s if they haven’t first been mercilessly hacked down by a pair of threes.

A game round is broken into a turn for each player, who each roll 3D6. Every zombie card has a number on it. If players can make the numbers rolled on the dice equal the numbers on one or more zombie cards, those zombies are destroyed.

All the standard operations are allowed, so you add, subtract, multiply and divide as you attempt to hold back the horde. For example, if you rolled 2, 4, and 6 you could knock out zombies valued 2 & 10; 12 & 4; or even 2, 4, & 6. Dice can be combined any way you can think of, but you must use all three numbers rolled or you can’t kill any zombies that turn.

After everybody has played, the round ends. If the players have killed all the zombies, i.e. the streets are empty, they are each dealt a survivor card, representing extra people they have saved. Survivor cards serve no purpose during the game but provide a method of scoring at the end; the more survivors you save the better you’ve done. If at the end of the round, there are zombies remaining they move forward. If they reach the barricades they start eating your survivors (or frightening them away, for those with a gentler disposition). Once all six barricade spaces are filled the defenses are overrun and the zombies win.

A new round begins with the plane moving forward one square and the arrival of another wave of zombies. Play continues until the plane arrives or the barricades are overrun. Game length can be set at 5, 10, or 15 turns, depending on how much time you have and/or the attention span of your players.

City of Zombies is intuitive, and is easy for children to pick up. There are quick rules on a 2-sided A4 sheet and the full rules only take up 6 pages. My boys were soon adding up the dice to destroy the zombies far quicker than if I’d said, “What’s 6 + 5 – 2?” There’s a special rule about powering up dice, i.e. squaring them, which gives defenders scope to make much bigger numbers. My six year-old now readily squares his numbers 1-6.

The beauty of City of Zombies is its scalability. There are four Zombie deck types A through D, with A & B having comparatively simple numbers, and C & D having more difficult ones like 29 and the dreaded 42. Once the players are comfortable with the basic game, there are optional advanced rules that are used to make play even harder. With all the advanced rules and the high-numbered zombies in play, the game is very challenging.

The special rules are denoted by recognizable icons on each card, making it easy to remember what their effects are. They can cause zombies to move faster, require that all the dice are used on only a single zombie, and even stop players using speech to confer (always fun). To allow my 6- & 9-year-olds to play equally alongside one another we make the special rules apply to the older one, but not for his younger brother. That way they can both contribute at their own level whilst maintaining game balance.

The icing on the cake, or perhaps the fluid on the brain, are the game’s production values. The zombie artwork is excellent. There are two types – cartoon and pen and ink. The type D cards, more generally used for older children, have more graphic depictions of zombies on them, but I don’t think they’ll give children nightmares. If you are unsure, there are lots of examples of the art work on the City of Zombies website. The card stock is good, the board is well made and the dice are high quality (making that satisfying clack when you shake them in your hand). It’s a great product to look at as well as play.

City of Zombies has just enough of the gruesome about it to switch on young minds, which you can then take advantage of by teaching them math without them noticing. It’s a perfect mix of challenge and education. Teacher pack versions are also available. I can’t comment on these directly as I haven’t tried them, but I can well believe they would be a valuable addition in the arsenal of any teacher wanting to teach mental arithmetic. The improvement in my children’s math has been marked.

This game has established itself as our family favorite in the three months we’ve owned it. It’s easy to play and great fun. I can’t think of a better conceived educational boardgame. It’s the perfect conjunction for geek parents and their offspring; math and zombie incursion. It’s preparing our little ones for life’s most important eventualities. And there’s more on the way. A Times Square Expansion Pack is on the horizon, and will include extra item cards, a D12 and zombies that go right up to 144! We can’t wait. 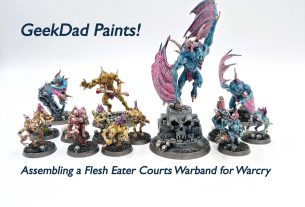 2 thoughts on “‘City of Zombies’: You Need Brains to Survive”