Ray: If there’s one thing that’s stressful these days, it’s flying. Even a happy family vacation can become a kafkaesque nightmare when the airport gets involved. Now imagine having assassins on that same flight! That’s life for Honor Guest in The Silencer #7, the most entertaining and inventive issue of the series. It opens with a tense segment that involves Honor murdering her mentor/ex-friend Talia, only for her to wake up with a start. It was all a dream, and she’s on a long-distance flight with her husband and son to the small Asian nation that contains both a family theme park, and the head of the assassins’ guild where she’s heading to finish the job and ensure her freedom. However, it soon becomes clear that the flight isn’t going to be a relaxing one. Not only is Ben showing that he remembers much more of the previous issue’s showdown than Honor would like, but genetically modified assassins Cradle and Grave are on the same flight – plotting to assassinate Honor as soon as she gives them the opportunity.

The first half of the issue is an intimate, close-quarters suspense thriller, but that gets blown wide open with the second half. As Honor excuses herself to head to the back, the assassins make their move. This seemingly old-woman-and-child pair is very different than they let on, actually being shape-shifting cyborg assassins who can transform at will. After engaging the Cone of Silence, a massive battle ensues between Honor and her stalkers in the cargo hold, and it winds up putting the entire plane at risk. With a hole blasted in the side of the plane, near-disaster ensues, but Honor displays some real cleverness in saving the day. This issue is so strong because it keeps the contrast between Honor’s two lives on display – it’s hard to get away from the family life when it’s on the same plane, and the assassin life keeps finding her. The best thing this series has going for it is Honor being a unique and compelling character, and I’m hoping this new arc abroad stays as strong as it began. 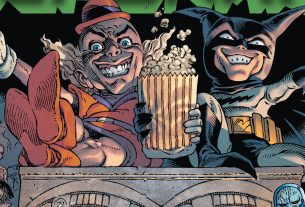