Ray: The fourth wedding prelude, this is the one that’s the most distant from the core Bat-family, as Jason Todd’s affiliation with the Bats is tentative on a good day. Despite this, he’s agreed to take a job for Bruce, guarding Selina’s bachelorette party while staying out of sight. He agrees – while also charging an exorbitant fee. I can’t help but feel like we’re on the outside of a more interesting story, as Seeley does his research and surrounds Selina with a party of Mouse from Nightwing, her long-time gadgetgirl Alice Tesla, her former fence Gwen Altamont, and her ex-girlfriend Eiko Hasigawa. Now that’s a party I would love to be a fly on the wall for. Unfortunately, most of them only get a few lines at most. (No Steph? I suppose she’s too young to get into bars.) However, what was supposed to be a quiet night of bodyguard duty turns out to be anything but when a group of radical anti-feminist terrorists attempts to bomb the party headquarters. Jason foils them pretty easily, but there’s a bigger plot afoot.

The cover obviously gives away who the villain behind this plot is, and I think it’s yet another case of no one really getting Anarky. Tynion was the closest, with the manipulative utopian willing to use others as pawns in a larger plot. Here, his use of radicals from all different stripes to create a mass chaos event doesn’t feel right at all. However, major points for Seeley doing his research and remembering the subplot about Anarky potentially being the son of the Joker. Here, it’s revealed that was likely just a cruel trick by his mother, but it’s messed him up psychologically ever since. How he found out about the wedding – how anyone is finding out about the wedding – and why he cares so much beyond using it to sort out his own issues isn’t clear. The issue is better than the Nightwing or Batgirl ones mainly because it’s not as bizarre a main plot and there’s a good amount of humor here – Seeley is obviously having fun writing the caustic relationship between Bruce and Jason. However, the closer we get to the big event, the more doubtful I get that the wedding is a status quo change that will stick.

Corrina: The main reason to enjoy the Batman: Prelude to the Wedding series is for the insights into the Bat-Family. The results of that have been mixed with the different specials, with more emphasis placed on the confrontation with the villains than how each hero relates to Batman.

And, unfortunately, continuing the pattern, there’s not much here between Jason and Bruce. It’s hard to tell where Batman and his most rebellious Robin stand, given there are different interpretations of the relationship by different writers, but having Jason request payment for guard duty seems as odd as the fact that Bruce assumes that Selina’s gathering needs guards. There are two Catwomen in that gathering, both deadly, so what the heck is Bruce thinking going behind Selina’s back like that?

Add in Anarky, and the issue kinda falls apart because it’s hard to get Anarky correct and it’s also a stretch to connect Jason and Lonnie. Anarky is Tim Drake’s villain/mirror self, not Jason’s, and no new insights come from this unusual confrontation.

I also remain puzzled by DC’s plan of having Batman and Catwoman get married in costume yet not legally. That seems a cheat and it also seems like a big red flag to wave in front of Batman’s Rogues. Which, yes, it’s turned out to be. It’s a bloody, bloody trail to this wedding, which makes it hard to celebrate. 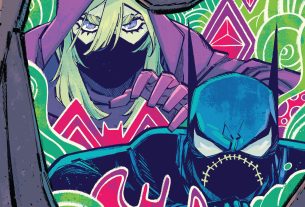