Ray: The Gemworld storyline wraps up in Young Justice #6, a dialogue-heavy issue that answers a lot of questions and raises others, as the whole Young Justice team unites for the first time against Dark Opal. But first, Bart wastes no time dropping the bomb about Conner apparently being married with a kid. Thankfully, the explanation (he was posing as a pregnant woman’s husband to protect her from Opan’s sadistic guards) doesn’t upend his status quo too much – Superman’s already having to get used to being the father of a teenager, suddenly finding out he’s a grandpa might be too much. It’s never clear whether Conner is actually romantically involved with the young widow, but given that he bids them goodbye at the end of the issue, it seems not. You never know with Conner – remember when he dated two twenty-something women in a row straight out of the tube? Teen Lantern and Ginny Hex also get to explain their origins a bit, but it seems like they’re mostly here to set up future stories.

The first half of the issue is very dialogue-heavy, almost textbook Bendis-esque, but things pick up in a big way in the second half as Dark Opal shows up in a massive walking monster-castle and kicks off a dramatic final battle. New artist John Timms does a great job capturing the scope of the battle, but I’m not sure he’s the best-suited to depicting the team themselves – his Superboy, Wonder Girl, and Amethyst, in particular, look a bit too old for their ages. After dispatching Dark Opal, the team asks the Gem council to send them back to Earth – only for a betrayal against Amethyst to cast them somewhere else entirely and set up the next art as their journey home gets a little longer. This first arc had some flaws – it tried to do so much that it short-changed some of the characters, and its storytelling was rather decompressed – but there’s no question it’s easily the most entertaining “young DC” book we’ve had in years. Low bar given the state of Teen Titans, but Bendis cleared it with ease.

Corrina: After refusing to answer many questions in the first five issues of Young Justice, answers come fast and furious this issue but it almost feels like too much. Some of these answers could have been parceled out earlier, like the fact that the baby isn’t Conner’s, instead of everything being tossed, via dialogue, into this one. But, as I’ve said, Bendis gonna Bendis. Take the good with the bad and, happily, there’s much that is good this issue.

Foremost among those good things is that this group acts like friends, not just a team that was thrown together because of circumstances. It’s a bar that hardly any hero teams have cleared lately, and, yes, it’s primarily due to their interactions in a previous continuity, but Bendis certainly deserves credit for re-creating that vibe. It’s fun to spend time with these kids, even the newbies. I could wish Amethyst had been a more prominent character, given this takes place on Gemworld, as her encounter with the Gem Council and the subsequent betrayal would have had more weight then. But I’m glad she’s part of the group.

About that betrayal. DC is kinda having it both ways, here. The betrayal will send Young Justice on another journey, away from the regular DC books. That gives the creative team a chance to do what they want in a fresh setting but it also allows DC to ignore any events in this book, such as Impulse’s return, which would naturally have an impact on Barry, Iris, and Wally over in the Flash series. (Original Wally could have certainly used the joy of Bart’s return, for instance.) Not to mention how Wonder Girl and Superboy’s return might affect the Superman and Wonder Woman books.

So, great to have the team back. The first arc was quite good if a little weirdly paced, but now we’re jumping into yet a different world, with no sign of getting back to their Earth in sight. 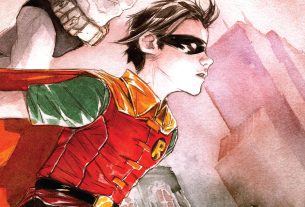 Review – Robin & Batman #1: Back to the Beginning