Ray: After four issues of scattered but entertaining storytelling, Young Justice #5 finally gives us some major answers about where these characters have been and how Tim Drake found out about the “lost” heroes. Unfortunately, while it delivers some of the best moments of the series, it also reminds us just how fast and loose Bendis plays with continuity. The story begins with the seven heroes of the new and old Young Justice teams making a bold escape from the prisons of Gemworld in a stolen car. They’re shot out of the sky by Dark Opal, and Superboy makes a chilling discovery – Opal has Kryptonite, stolen from Earth. On that cliffhanger, we launch into Tim Drake’s flashback story, with guest art from Kris Anka. Unlike the other Core Four heroes, he’s been present in Rebirth and his story picks up from the last issue of Tynion’s Detective Comics run, where he and Steph went on the road.

This is an extended segment showing how Tim rediscovers his lost memories from Zatanna, as she uncovers that his mind has been tampered with (by Doctor Manhattan? We’ll see). Doc Shaner guest-stars with a brilliant two-page spread featuring the classic YJ characters – not just the core four, but obscure faves like Secret, Arrowette, Empress, and even Slobo.

Bendis did his research here – which makes it puzzling that he also makes some major missteps in the segment of the story featuring Stephanie Brown, Tim’s traveling partner. He remembers that Steph used to be a Robin – but references her father breaking out of prison when Cluemaster’s death was a huge part of Batman: Eternal. He does commit to the Tim/Steph relationship, which is written really well here even as Steph and Tim head off on their own adventures. The issue ends with another tense escape from Dark Opal and a lot of unanswered questions, but it feels like this title is gaining momentum again. 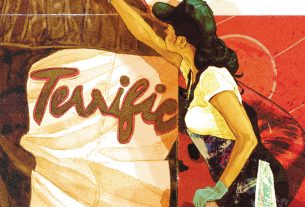