Ray: As the 6th Dimension story continues to shake up Justice League, Justice League #23 takes on a tone equal points between an event comic and a character-driven suspense thriller. When we pick up, Superman is still stranded in the middle of nowhere with barely enough sun to survive. After a flashback to a perfect day he spent with his son, he makes one last desperate attempt to escape, pushing him beyond his limits – but that’s foreshadowing for a shocking twist to come late in the issue. The rest of the Justice League has been captured by a group of post-apocalyptic shock troops led by an aged Lois and Jimmy, which could have been an ugly twist but instead grounds their actions in the desperation caused by the coming of Perpetua. They’re not needlessly cruel or evil, they’re trying to survive – and Lois’ comments about how Clark will always do the right thing even when it’s unfeasible hit home.

The Justice League makes an attempt to break out, but they soon realize they weren’t all taken to the cells – Batman isn’t with them. That’s because Batman has been taken by the World Forger to his private quarters for a conversation between equals. Batman is a creature of logic, and the World Forger sees potential there to turn him.

What’s made this interesting is that the World Forger, while wanting to wipe out billions of lives, is a far more benevolent villain than most in that he’s trying to fend off a far greater evil. He appeals to the pragmatist inside Batman, even as the heroes are enlisting Shayne to make a last-ditch stand against the world they’re trapped in. This leads to a crazy finish as the heroes’ salvation comes from an unlikely source – just as Batman makes a shocking decision that leads to one of the most devastating cliffhangers in a while. It’s not just hard to see how the heroes will escape this, it’s hard to see how one of comics’ most iconic partnerships will rebound. 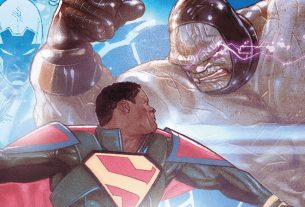 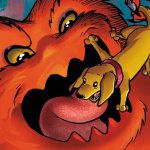