Ray: While Diana: Princess of the Amazons offers an all-ages take on Diana’s beginnings, Wonder Woman: Warbringer throws the teenage Amazon into a tense battle for the fate of the world long before she becomes the superhero we know. It’s interesting how both OGNs start with the same point – Diana is the only youth on Themyscira and is struggling to fit in.

Here she’s a teenager, likely several years before her fateful encounter with Steve Trevor, and she’s chafing under her mother’s protection. Complicating things, Hippolyta’s second-in-command has always distrusted her due to Diana not being a “True Amazon”, and Diana’s drive to prove herself leads her to enter a challenging ritual race to determine the strongest warrior.

The race is set up, but not long in Diana is diverted by a dramatic twist – a fiery shipwreck on the bank of the island that holds a survivor from man’s world. A sense of Deja Vu is expected, but this isn’t Steve Trevor’s ship. It holds a teenage girl named Alia, who lost several of her friends in the crash and is pulled to safety by Diana. But when the girl arrives on Themyscira, hidden by Diana, things start going very wrong on the island. Mysterious illnesses and natural disasters beset the Amazons, and it soon turns out that Alia is carrying with her a rare bloodline that just may bring a curse on Themyscira. Desperate to save her home but not willing to abandon Alia, Diana makes the dangerous choice to leave Themyscira to escort her home – even though it means she might never be able to return.

Of course, everyone’s going to wonder how this is possible, given that Diana never left the island until she won the tournament and met Steve Trevor. The book explains that well and it’s a clever twist. Watching Diana get to know New York with a very different companion by her side – one with her own extraordinary legacy – is fun.

Soon Diana gets to know Alia’s diverse group of friends and her overprotective brother Jason, and learns exactly what secret Alia’s been carrying with her. The legacy of the Warbringer is probably the book’s weakest part, as it’s heavily rooted in a complex legend with ties to Helen of Troy and requires a lot of exposition. The best parts of the 200-page OGN are the ones where the plot lets up for a little while and we get to see Diana explore the world as a younger, less focused version of herself.

Ultimately, it feels like Wonder Woman: Warbringer was probably an excellent novel that introduced several intriguing new elements to her mythology. As a graphic novel, it feels like it had a lot of heavy lifting to do to adapt a novel much denser than Batman: Nightwalker. There’s a lot of dialogue, and the reveal of the villain and their powerful weapon comes quickly towards the end of the book.

The art by Kit Seaton is gorgeous, but with so little of the story taking place on Themyscira she doesn’t get to show off her fantasy chops as much. The quality in this book is top-notch, but adapting a novel into a comic book is always tricky and this one reads like it might be best served in its original format where Bardugo can flesh out her characters more fully. 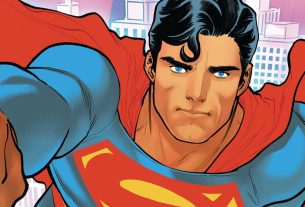