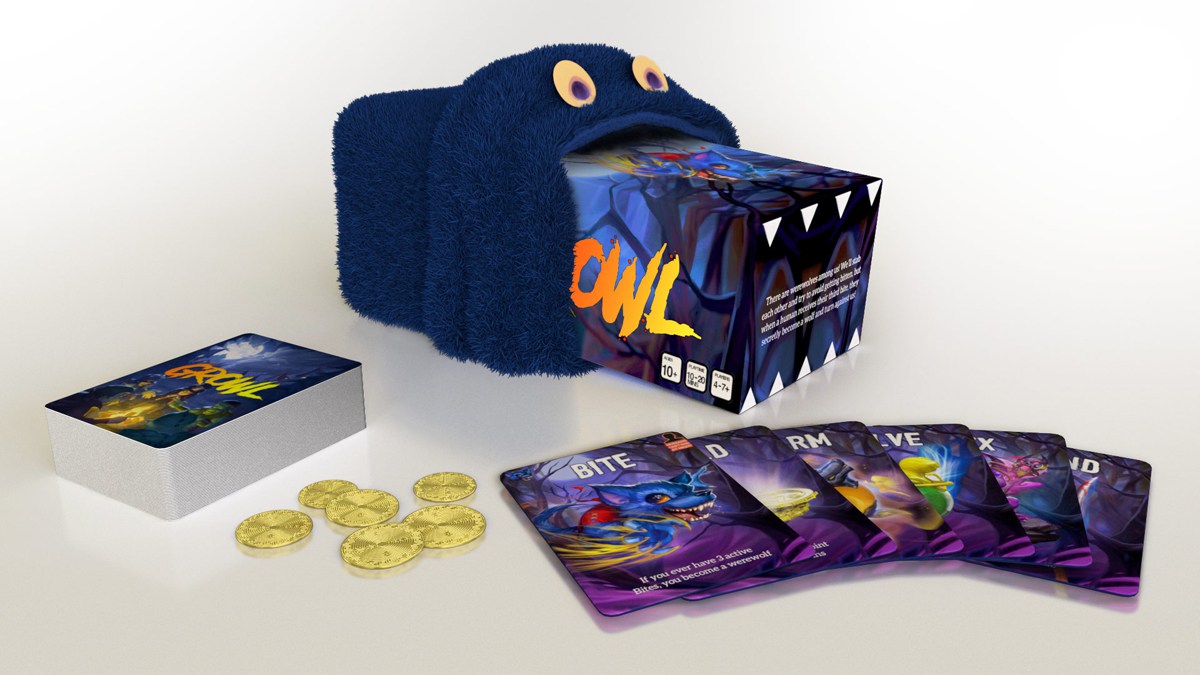 Who’s a werewolf and who’s an innocent villager? You’ll find out at night when somebody gets bit, so you better have your pitchforks ready. Growl is a new spin on the classic werewolf game.

Growl is a social deduction game for 4 to 7 players (up to 10 with expansion cards), ages 10 and up, and takes about 10–15 minutes per round. (You can play a single round, or play multiple rounds while keeping score.) It’s currently seeking funding on Kickstarter, with a pledge level of $16 for a copy of the game, or $24 for the “Howly Growly Box,” which includes the expansion. The game, as with the traditional game of Werewolf, does involve werewolf bites and wounding players with pitchforks (though no “lynching”), so keep that in mind when gauging if it’s appropriate for your kids.

The game is primarily a deck of cards:

Note that the final version may have a different card count; in particular, designer Joey Vigour has told me that there will be more night cards to choose from. The prototype also came with some coin tokens and poker chips for keeping score over multiple rounds; the final version will include coins of some sort.

The art and design on my prototype aren’t totally finalized, but you can get a pretty good sense of how they may look. The illustrations are set against a spooky forest background, with a sort of cute werewolf and a creepy hex (which may look different in the final version as well—see the Kickstarter for the latest versions).

Despite the various classic movie monsters on the backs of the cards, the game (at least in the prototype version so far) is only about humans and werewolves, and does not involve vampires, mummies, Frankenstein’s monster, or aquatic monsters. I’m not sure if that artwork is final.

Pictured at the top of the post is the “Howly Growly” box—the $16 pledge will come in a more traditional (and less furry) game box.

How to Play Growl

Give each player an objective card, which has a reminder of the goals for both humans and werewolves.

Depending on the number of players, remove some Wound and Bite cards from the deck; they will not be used for the game.

Then, shuffle the rest of the deck and deal three more cards to each player. If any player has 3 Wounds, they shuffle those three Wounds back into the deck and get three new cards.

There are several different card types that have different effects:

The game has three day phases and three night phases. The day phases will last several turns until a Night card is revealed.

In the Day phase, on your turn, reveal the top card of the deck. You must give this card to another player (not yourself). There can be discussion before this happens, and then the card is placed in that player’s hand.

Then, after the Night card ability is resolved, each player passes one card to the right and one card to the left, placing them on the objective cards. You may pass any of your cards, with one exception: humans may not pass Bite cards; only werewolves can pass Bites. Before picking up the two cards that were passed to you, shuffle them, and then place them into your hand.

The Final Night card is the last one in the deck, and the rules are the same for the other Night cards, though they are more powerful: the Purge forces a vote that immediately eliminates one player, and the Silver Bullet causes wounds to a player (but is more powerful against werewolves). Then, night falls and players pass cards one more time.

After the last card pass, players check one more time to see if they’ve become werewolves or have been killed.

The winning team reveals their hands and counts up the gold cards—each player scores the total team’s gold. If you play multiple rounds, track each player’s gold (since players will not all be on the same teams each round). At the end of the night, the player with the most gold is the Wolf King or Queen.

Why You Should Play Growl

Like the classic game of Werewolf, Growl is a social deduction game and is full of lies and backstabbing and betrayal—either you like that sort of thing or you don’t. But Growl also brings some interesting tweaks to the genre.

Joey Vigour, the designer of Growl, has worked on some big tabletop games in the past, like Chaosmos and Battlestations, so Growl may seem like a bit of a departure for him. But he also plays a lot of casual games, and he’s hoping that Growl (and a potential expansion) will bridge the gap between casual games and “hobby games” (for lack of a better term)—it starts with a familiar concept and then adds in some more strategic depth. Plus, it has no need for a moderator, so everyone gets to play.

After playing Growl, it reminds me a little more of something like The Resistance because aside from just making decisions based on social cues, you have some hard evidence in play as well. If you get passed a Bite card, you know that one of the players sitting next to you is a werewolf—though of course convincing people of that may still be difficult. One of the things that I never entirely liked about Werewolf is that a lot of the games accusations can be entirely baseless. Once you throw in some of the other roles, you do have players who are working from evidence.

Growl gives you a little more information to play with. During the day phase, players will get cards—and everyone knows what is being passed to whom at this phase. There is some strategy in passing cards around. As a human, you have to be careful where you pass the Bite cards—give too many to a fellow human, and you turn them against you. But give them to a werewolf, and you’re arming them. And, of course, everyone will pretend to be reluctant to get Bites.

At Night, you have to decide which cards to pass, based on what you’ve seen and heard during the day. Is the person to your left a werewolf? Maybe you better pass a Wound, hoping you can kill them off. Are you a werewolf yourself? Better start biting! There are only 3 nights total, so you have to turn (or kill) your neighbors as quickly as you can.

While the cards add some strategy and evidence for making your decisions, they also throw in an element of random chance: even if you’re a human and you know for sure that there’s a werewolf sitting next to you, you can’t do anything about it unless you can get three Wounds into their hand. Of course, if you can convince other players to join you, you might be able to pass three Wounds to that player during the day phase. As with other social deduction games, part of the key is figuring out who’s on your side and working with them, without giving away too much information to your opponents. If you convince everyone that you’re a human and another player is a werewolf, you might have just helped the werewolves find an ally.

As with other games of this type, player elimination can be an issue. Each round of the game is relatively short, so if you die you’re not sitting out for an hour—but I have had some games where a player was killed off during the first night, which can feel frustrating. It’s hypothetically possible to kill somebody off in the first turn of the game, if they had two wounds already and the first player handed them one more—but that may depend a lot on your particular gaming group’s strategy. At any rate, you’ll have to decide whether the player elimination is something you can live with.

I’ve played Growl several times, mostly with a mixed group of kids and adults. Some of the kids can be stubbornly loyal to each other, which always leads to some interesting results if they turn out to be on opposite teams. We’ve had both human wins and werewolf wins, including one game in which everyone turned into a werewolf at the end, except me—and they killed me off. We usually don’t end up keeping score with the Gold, which does mean that the Gold cards are one of the least interesting cards in the deck—but they’re still something you can pass to let a neighbor know that you’re friendly, without risking yourself by giving away Salves or Charms.

I’m generally not a huge fan of social games; I haven’t played classic Werewolf in a very long time, though I do enjoy One Night Ultimate Werewolf. Growl seems like a nice in-betweener. It’s still not on the top of my list because I’ll always prefer more mechanics-based strategy than social-engineering-based strategy, but my current gaming group has been having fun with it, so we’ve kicked off a few game nights playing it.

Overall, I think Growl is a fairly fun party game and a neat twist on Werewolf. It’s pretty quick to play a single round, and we usually end up playing at least two or three rounds at a time. It’s hard to say whether it will replace classic Werewolf for serious fans, or if it will draw more hobby gamers into social deduction, but it’s a nice in-between, tilted more toward the social deduction side. I’m curious to see what else Vigour has planned for the game, because he has mentioned increasing strategic depth.

For more information or to make a pledge, visit the Growl Kickstarter page! 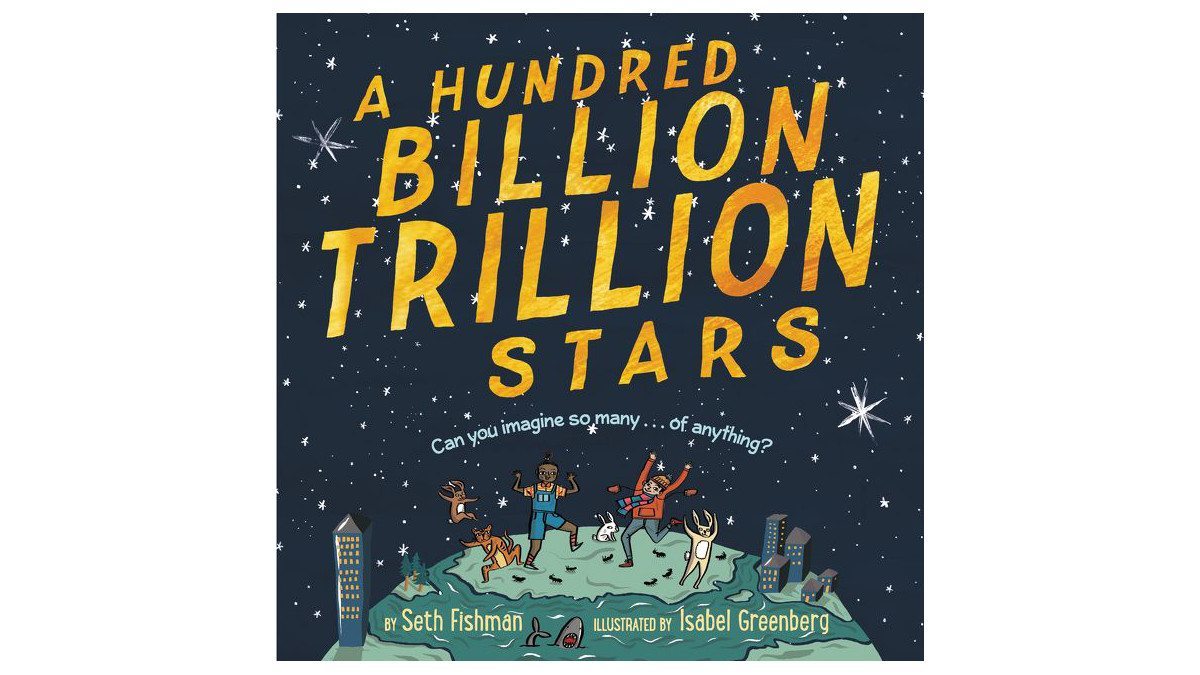