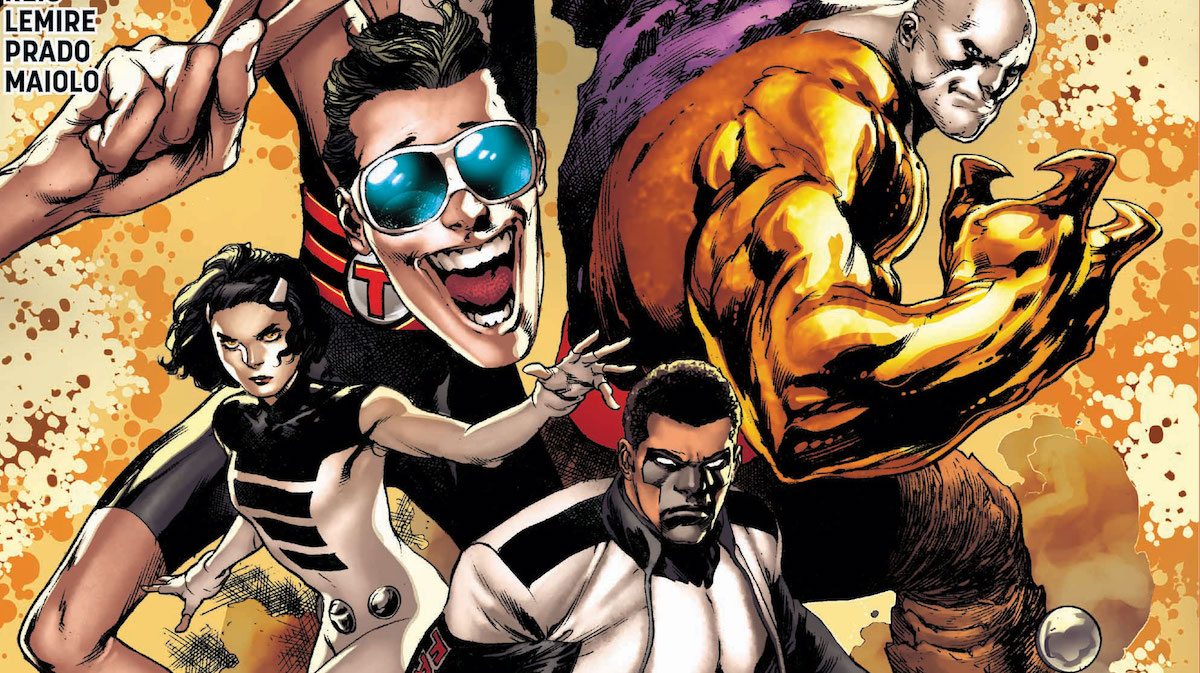 Ray: The Terrifics #1, one of the most hotly anticipated installments of “The New Age of DC Heroes” due to it bringing us the return of comics’ biggest idea man, Jeff Lemire, to DC Comics, this is also the first one based around existing characters. It’s impossible to avoid the comparisons to the Fantastic Four with this title, and I think that’s intentional – a lot of these new characters and concepts have a bit of a Marvel vibe, and if they don’t want to make an FF book, DC will! This first issue, though, while very intriguing, is more conventional than I expected. It’s mostly setup, as we meet the four main characters and find out how they fit together. Taking place in the aftermath of Metal, it starts with the newly returned Michael Holt arriving at Simon Stagg’s laboratory, where an experiment by the mad scientist businessman has opened a destructive portal – with Metamorpho, transformed into Nth Metal, stuck in the middle of it.

Fortunately, Mr. Terrific has a secret weapon in egg form – Plastic Man, who it turns out has been dormant ever since he was exposed to the Dark Multiverse years ago, and being exposed to it once again wakes him up. Lemire’s obviously done a lot of research into Plastic Man’s power set because he’s the first writer since Grant Morrison and Joe Kelly’s runs on Justice League who seems interested in seeing just how far he can be pushed. All the visuals involving him are fantastic. He’s also none too pleased to have been kept dormant for years. The reveal of where they are in the Dark Multiverse, and exactly what’s lying there, is easily the issue’s best visual. The introduction of Phantom Girl at the end of the issue, as someone who’s been stranded there much longer than the three other heroes, is intriguing, and this is far and away the best of the four launches so far. Like the others, though, I feel that this is a book that could have benefited from a double-sized debut. It starts setting up some great things, and I didn’t want to stop reading.

But what this means for the plot of The Terrifics is that she’s Lemire’s original character and can fill any role he wants, giving him a wild card in this series, unconnected to past or future DC events. Lucky Linnya, making her debut in this fantastic (see what I did there?) book.

Michael Holt has never been so commanding, Plastic Man is terrific in his confusion, and Metamorpho is handled well, something not all writers can do. It’s a nice touch that Michael points out to Rex how to avoid becoming trapped–and notes that Stagg should have told him that.

The plot moves fast, takes us to an intriguing area of space, and provides a new reader with a good grounding in all these people all the while making them likable.

Believe the title: this is terrific.

This Halloween, Save Their Teeth and Feed Their Brains